Every year, the nation uses more than 20 million tons of salt to clear snow and ice from winter roads. While it may make the roads safer, scientists say salt may have the opposite effect on drinking water and wildlife. Ashley Ahearn reports.

Winter just won't let up this year, and we keep piling on the salt.

[SPRINKLING OF SALT ON SIDEWALK]

CURWOOD: Over half the states in the Union apply salt to their roads and in fact, the United States Geological Survey reports that in 2011 nearly 20 million tons of salt were used to de-ice and keep our roads safe. But all that salt may not be so safe for our drinking water, or the environment. Not long ago reporter Ashley Ahearn headed out in a snowstorm to find out more.

AHEARN: When a recent nor’easter plastered the streets of Cambridge with white, Osiris Ochoa and Alcides Perez got to work.

AHEARN: Are you guys putting salt on the sidewalk after?

OCHOA: I don’t know how good it is for the environment, but for the snow and the ice it’s pretty good.

AHEARN: Over 20 million tons of salt are used to clear U.S. roads each winter - far more than any other type of snow removal chemical or sand.

SWAN: It’s a lot of salt. It dissolves in water so it ends up as runoff in our streams and rivers or it ends up in the groundwater or it ends up stored in soils. 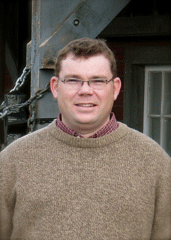 AHEARN: Chris Swan is an assistant professor in the Environmental Sciences department at the University of Maryland, Baltimore County.

SWAN: As that increases, we’re starting to see a rise in the average and peak salt concentrations in our drinking water.

AHEARN: One recent National Academy of Sciences study shows that salt concentration in fresh water is on the rise in Maryland, New Hampshire and New York due to road salting and could make groundwater in many areas of the Northeast un-drinkable within a century. 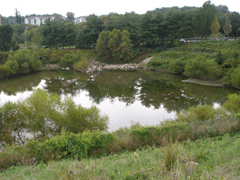 Storm water runoff ponds, like this one in the Red Run Watershed in Maryland, often have high levels of salt, affecting the pond’s ecosystem. (Photo: Robin Van Meter)

A new study from the University of Minnesota found salt levels on the rise in 39 lakes in the Midwest. Too much salt isn’t good for people or, says Chris Swan, for freshwater ecosystems. 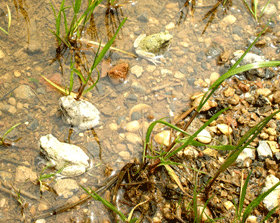 AHEARN: When Chris Swan exposed frogs to the same levels of salt found in semi-urban watersheds, he found they didn’t shrivel up and die. The salt changed the way the frogs developed.

SWAN: There’s something very odd going on. What we’re focusing on is the time it takes for them to go from egg to adults and we measure how large they are. And our initial studies are showing that they do that faster and when they do become adults they tend to be slightly larger than they are when they’re not exposed to salt.

AHEARN: Swan says the frogs exposed to salt feed much more intensely during development and this could make them easier prey in the wild, although it’s too soon to tell what this might mean for survival rates, or breeding. Amphibians are indicator species for freshwater ecosystems, but Swan says you’ve got to look to the smaller members of the aquatic food chain to get the big picture. 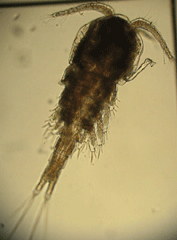 Zooplankton are an important food source for many fish, and suffer severely from exposure to salt. (Photo: Jennifer Li)

SWAN: Right now we’re showing that while we see these interesting effects on the frogs and the food that they eat, we’re also seeing the zooplankton being really negatively impacted.

AHEARN: Zooplankton...those are the tiny invertebrates that propel themselves around the water column, feeding on algae. If salt kills zooplankton, that’s not just going to mean more green scum on the water, it could also mean that larger predators, like the many species of fish that feed on zooplankton, go hungry.

[MUSIC - Chuck Berry, “Ridin’ along in my Automobile”]

AHEARN: Since the 40’s and 50’s highway agencies in the U.S. have operated under what’s called the “bare pavement” policy - doing whatever it takes to keep roads clear of snow and ice for motorists.

It’s about convenience. And perhaps no one knows that better than Brian Birch. He’s the Assistant Executive Director of the Snow and Ice Management Association. I called him up during a recent nor’easter.

BIRCH: Hi, this is Brian.

BIRCH: Oh hi, Ashley, how are you?

AHEARN: Birch had been stuck in the Newark airport for the past three hours, but he was still willing to talk about the effects of salting roads.

AHEARN: So do you hate Mother Nature right now?

AHEARN ON TAPE: How long have you been sitting in that airport, c’mon?

BIRCH: [LAUGHS] Well, um, it’s frustrating, I’m just like everybody else. Basically if you think about it, we live in a culture of convenience where we want to be able to go about our daily lives and be able to do anything we want to do even if it snowed eight inches outside.

AHEARN: As Birch said, snow removal is a critical public safety issue. Over 115,000 accidents happened under winter driving conditions in 2006. However, a growing number of scientists, like Chris Swan, are highlighting the effects of adding over 20 million tons of salt to the environment each winter, and they’re calling for smarter salting techniques.

Salt is still by far the cheapest and most readily available de-icer, but some cities and towns are looking into alternatives. Akron, Ohio uses beet juice as a de-icer and some towns in Connecticut and New York add high fructose corn syrup and molasses to their salt - all in the name of keeping winter roads safer for motorists and frogs alike. For Living on Earth, I’m Ashley Ahearn.

The Center for Urban Environmental Research & Education at University of Maryland, Baltimore County

Increased Salinization of Fresh Water in the Northeastern United States

Accumulation of Deicing Salts in an Soils in an Urban Environment