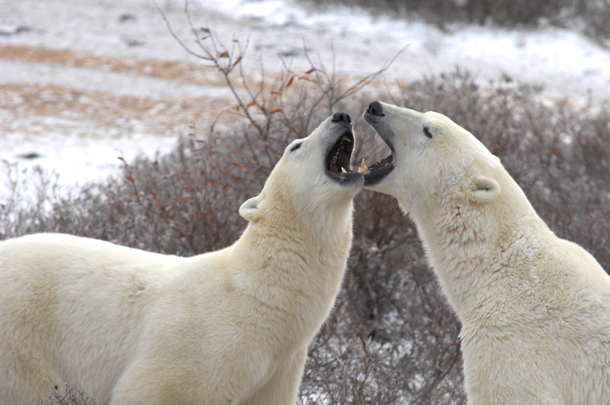 Polar Bears have long been the poster species for the problem of climate change. But a new paper in Conservation Letters argues that supplemental feeding may be necessary to prevent polar bear populations from going extinct. Polar bear expert Andrew Derocher from the University of Alberta joins Host Steve Curwood to discuss how we can save the largest bear on the planet.

CURWOOD: It’s Living on Earth, I'm Steve Curwood. The polar bear has become an icon of the melting arctic, the poster species that illustrates the rapid advance of climate change. And now a paper published in the journal Conservation Letters argues that drastic measures may be needed to save Ursus maritimus from extinction, including supplemental feeding. Andrew Derocher is a Professor of Biology at the University of Alberta, a long-time polar bear researcher and one of the paper’s primary authors.

DEROCHER: We’ve got 19 different populations of polar bears in the circumpolar Arctic and each one of them has a slightly different story to tell. Some of the populations are definitely undergoing stress with climate changes where the sea ice melts away, particularly those bears that live in the Hudson Bay system in Canada, but also the bears off of Alaska in the Southern Beaufort Sea population are showing clear signs of stress. Other populations are quite secure and will continue to be so for quite some number of years into the future. 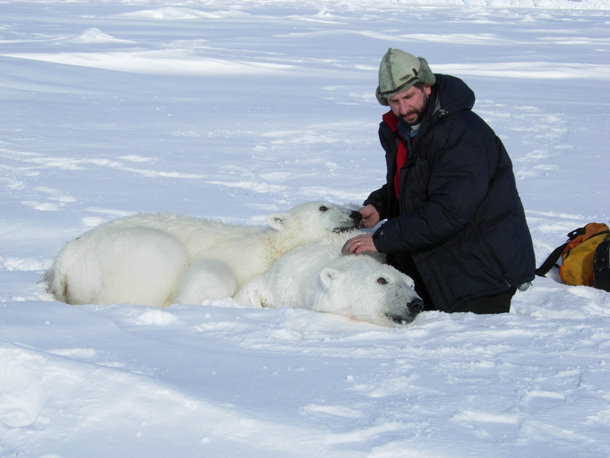 CURWOOD: Now, talk to me a bit about the basic biology of a polar bear...just why does it need this Arctic ice?

DEROCHER: Well, basically it’s the platform that they live on and they travel across it, so they undertake long-distance migrations covering vast distances in a single year. They sort of move between different places to hunt their primary prey which are Ring seals and Bearded seals. They're only found where the sea ice exists and we only have polar bears where there are these two species of seals.

So basically the bears are adapted to dealing with the sea ice environment; you really have to think of them more as a marine mammal than a terrestrial mammal. Virtually all of their nutrition comes from the marine environment.

DEROCHER: It’s a simple story really. It’s just a habitat loss issue so, as we warm up the climate, the Arctic is showing very rapid changes in sea ice, and basically, polar bears are just being pushed away from places where they have lived in recent tens of thousands of years. We expect them to continue to lose their habitat in the south; they’ll persist for some longer period of time at very high latitudes, but of course it’ll be a much diminished number of bears than we have today. The very best studies were done by the US Fish and Wildlife Service, and their estimates were that we'll lose two-thirds of the global population of polar bears by midcentury. Some indications are that that might have been overly optimistic; we may lose some of these populations much, much sooner than.

CURWOOD: By the way, people still shoot polar bears in many places, yes? 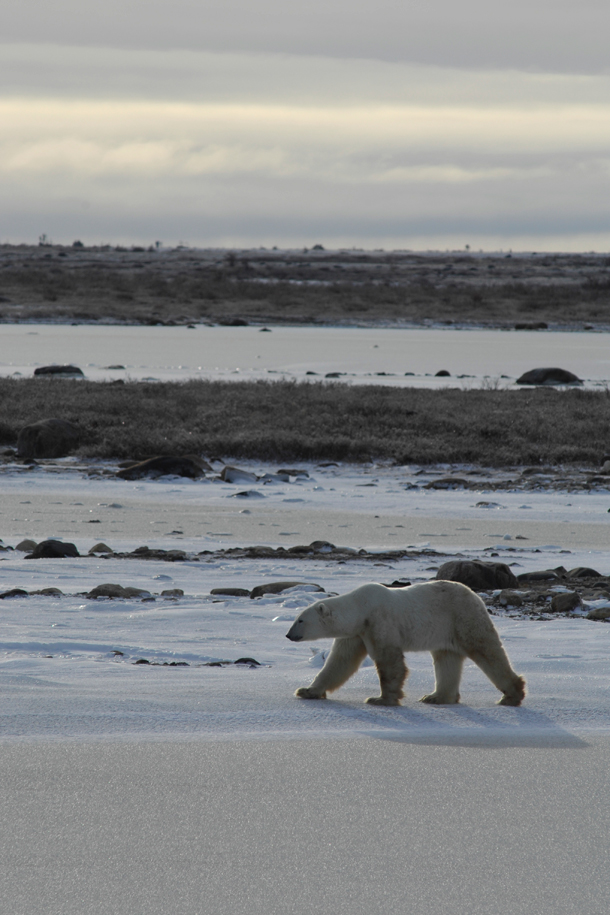 A polar bear walking on the ice (photo: Andrew Deroche

DEROCHER: Yes that's still pretty common in much of the Arctic. We still have a harvest throughout North America and Greenland; Norway doesn't hunt bears, and Russia has a very limited hunt. And that is a concern, but it's not really what's pushing the conservation issues for the management of polar bears or their conservation. Some of these populations have a sustainable harvest and there’s no reasons why local people can’t continue to live in a subsistence manner and harvest polar bears. The problem is some of our populations won’t have a sustainable harvest, or don’t have one right now. And that’s where there’s a lot of challenges coming for local people that have relied on these resources for thousands of years.

CURWOOD: Your paper outline some potential strategies for saving the polar bear...please discuss them with me now. 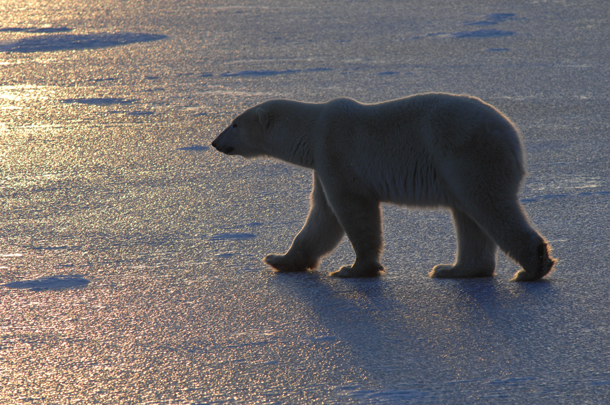 DEROCHER: We basically raise a bunch of options, which is from sort of a minimalistic sense -you do nothing, you just watch them disappear. The other option is that you perhaps start to rehabilitate some of these starving bears, try to keep them alive and put them back into the population. So feed them up, then let them go.

CURWOOD: Feeding bears? How necessary do you think that might be?

DEROCHER: I think we're going to be doing it; I think there's such intense interest in polar bears that I think we will be feeding them. There's no doubt in my mind that some of these populations are going to probably be sustained with supplemental feeding. To put it into perspective, we feed other species to keep them alive as well. So if you go into a European context, their equivalent of our Grizzly bear, the Brown bear, there are populations that are fed all the time to keep a viable population in an area - and to keep them away from humans as well. We also do it with species like California condors to provide them with clean food. So it's not unheard of and you can see the hand of humans and conservation of many species.

CURWOOD: Well, how do you feed a hungry polar bear?

DEROCHER: Very carefully for starters, and certainly not close-up. But what we argue is that probably because the prey of polar bears is also going to be highly endangered - Ring seals and Bearded seals are not going to have a good time with disappearing sea ice - so we're probably looking at alternate food sources. We really suggest that we’ll probably be dealing with sort of commercial polar bear chow similar to what a polar bear would see in a zoo.

CURWOOD: Wait a second; you start feeding a polar bear chow, they get used to the handout from folks, I mean, you don't have a wild polar bear anymore.

DEROCHER: No, and that's really what we talk about in this. In some places down the road, we may be looking sort of at what we would call a semi-wild bear park model, which is not inconceivable in some areas. What we would hope is that we wouldn't have to support the bears fully, that there would still be enough sea ice forming in some of these areas, that the bears would disappear and go hunt seals when they are available - but this would be sort of a means of keeping the population more viable.

CURWOOD: So if I understand what you're talking about here, the notion is that, hey, maybe we should be feeding these bears when the time comes, so there will be more time to deal with the impact of climate change?

DEROCHER: None of the options we outlined in this paper really do much good in the longer term if we don't deal with greenhouse gas emissions. The whole field of conservation biology hinges on the idea that you have the habitat of the species in place, so that you can actually keep them alive in the wild. The big challenge for polar bears, and what’s different compared to a lot of terrestrial species is we’re just losing sea ice at such a rate that it's hard to believe we’re going to turn this around in time to save most of the polar bear populations. What we’re hoping is we're going to hold onto some bears at very high latitudes in the Canadian Arctic and probably in Northern Greenland and that that might be the sort of nucleus of an expansion of a population perhaps hundreds or thousands of years from now if the planet starts to cool down again and we start to see an expansion of sea ice into lower latitudes again.

CURWOOD: Now there’s some people out there who argue that polar bears may in fact be able to adapt to changes in the climate and just change their diet to rely less heavily on seal blubber. How do you respond to that argument?

DEROCHER: Well, it’s pretty simple, I mean, we played out that scenario about 10,000 years ago in the Baltic Sea. We have very good evidence of fossil polar bears being all around Finland and Sweden and Denmark, in Northern Ireland, because the planet was a lot colder then. It was an Ice Age; the bears were very far South; we don't have polar bears in Ireland and we don't have them in Sweden or Finland anymore. Basically the bears blinked out when the sea ice disappeared. So we know what's going to happen. It's pretty clear that highly specialized species like these don't adapt to climate change. 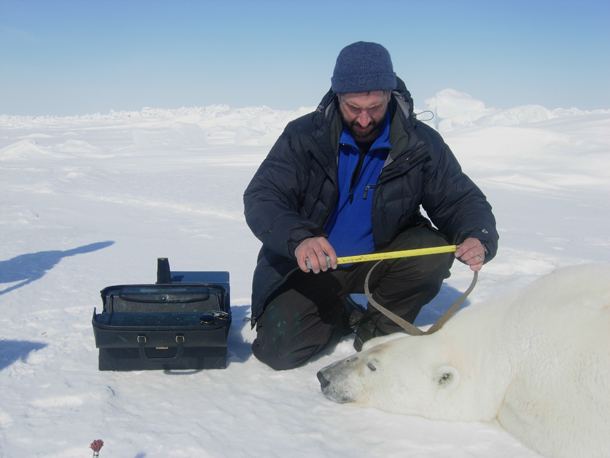 CURWOOD: So in the end, Andrew, what you think we need to do to save the polar bear?

DEROCHER: There’s a simple solution to saving the polar bear and that’s really that humanity has to deal with two issues. One is overpopulation and excessive use of fossil fuels. Until we can deal with those two issues, the future for polar bears is definitely going to be challenging. But it's not just polar bears. It’s going to be so many other species and ecosystems that are going to be pressed so hard by climate change. At the end of the day, the climate’s warming; polar bears are going to be one of the clear victims of it.

CURWOOD: Andrew Derocher is a Professor of Biology at the University of Alberta. Thank you so much.

DEROCHER: It’s been my pleasure.


Andrew Derocher’s Book Polar Bears: A Complete Guide to Their Biology and Behavior

Andrew Derocher’s faculty page at the University of Alberta