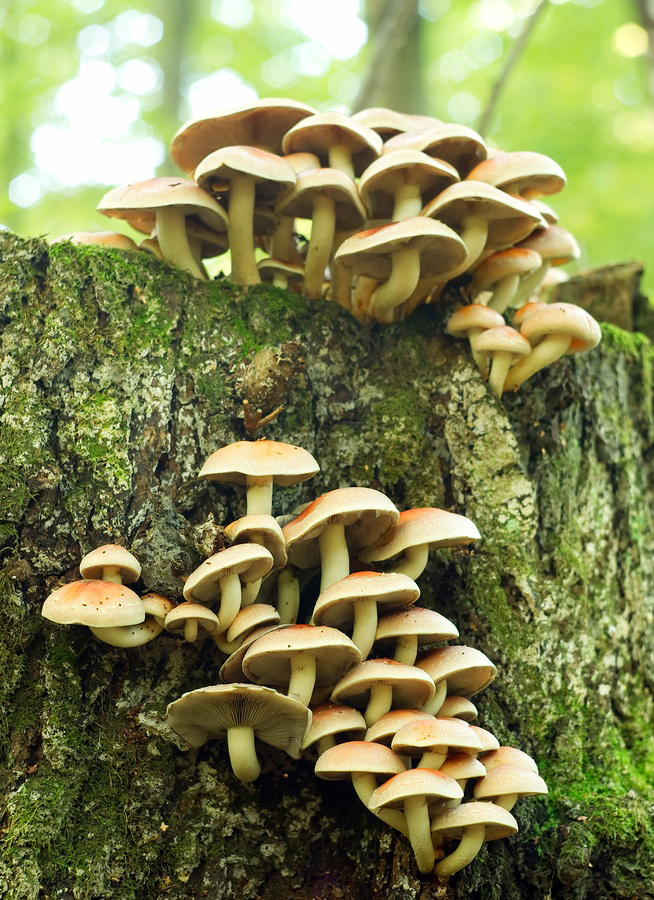 There's much more to fungi than the familiar mushrooms and toadstools. As Ari Daniel Shapiro reports, fungi are both the great creators and the great destroyers of the plant kingdom.

CURWOOD: Hamlet, that deep thinker, told his friend Horatio that there were more things in heaven and earth than were dreamed of in his philosophy. Well, Ari Daniel Shapiro has been bringing us regular insights into the myriad diverse species to be found in the living world. And today, he brings us a kingdom - and a riddle.

SHAPIRO: I’m pretty sure you haven’t heard this one before. What is all around us and very hard to see, and both dismantles and shapes our world?
BODDY: Let’s have a little look for another log.
SHAPIRO: Lynne Boddy – an ecologist from Cardiff University in Wales – is the one who gave me the idea for the riddle.
[RUSTLING SOUNDS]
SHAPIRO: She’s shuffling through the leaves in a little patch of forest in Concord, Massachusetts.
BODDY: Oh, look at this.
SHAPIRO: She’s spotted a soft birch tree log lying on the forest floor. Boddy kneels down and starts tugging on the log.
BODDY: We’ve turned over this log. Can you see this?
SHAPIRO: Oh, yeah! A few limp, cream‐colored threads descend from the rotting log and make their way into the soil. They look like plant roots to me. But I’m wrong.
BODDY: What we’re looking at is the main part of a fungus. Most of us think of fungi as things like mushrooms and toadstools. But that’s just the tip of the iceberg. That’s the fruit body, and the fruit bodies are like the flowers of flowering plants. There’s another part of the fungus – it’s usually hidden in rotten wood and in the leaf litter on the forest floor.
SHAPIRO: They’re really helping to kind of connect this rotting wood to the soil.
BODDY: That’s exactly right. They are.
SHAPIRO: These fungal threads – or mycelia – are doing the work of decomposition, slowly digesting and feeding upon this birch tree. One example is the sulphur tuft fungus.
BODDY: Hypholoma fasciculare.
SHAPIRO: An organism that grows both in the US and in Britain. Boddy gingerly holds its mycelium and begins tracing it through the soil.
BODDY: Oh my goodness! It’s attached to an acorn from this oak tree. So it’s not only decomposing the wood of the birch tree, but it’s decomposing this old acorn. 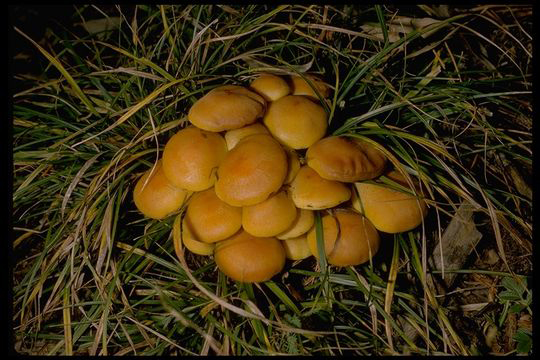 SHAPIRO: A little farther along, the fungal threads have grabbed a hold of another little acorn hat, crawled along its perimeter, and surged out the other end in search of something else to colonize – a branch, a tree stump, or another log. Nutrients consumed in one part of the fungi get routed into this vast, interconnected mycelial network. And if one part of the network gets chewed up by a wood louse, say, or stomped through by a deer, it’s no big deal for the fungus. It’s so interconnected that there’s little risk of chopping one of these fungi in two.
Boddy loses the trail when the mycelia plunge straight down into the soil. But this fungal tapestry doesn’t just carpet the forest floor.
BODDY: In all of these trees that you see around us, there are fungi within the trunks and branches, not doing very much – just tiny, tiny, little pockets. And then the minute that the water in the sapwood of these trees stops flowing, these fungi will grow into bigger mycelia and start the decay process. So the minute this tree comes down, or even before, decay has started. Then spores will land, and they will try to get in, and it will have landed on a network of cords on the forest floor. And that fungus will get in too. And so we have a battle going on in this wood. 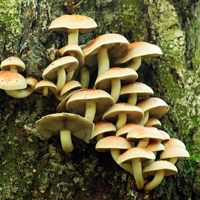 SHAPIRO: A greedy battle over the nutrients locked up inside the newly dead tree. So that’s one portrait of the fungal community – lying in wait, wood‐thirsty, and skirmish‐ prone. But there’s another side to fungi. The benevolent side, and the second half of the riddle – what not only dismantles, but also shapes our world.
BODDY: None of these plants in this beautiful woodland would be here if it were not for fungi for two very good reasons. One is that the fungi, which are decomposing, actually release the nutrients that are locked up. Those nutrients can then be used by the trees around. And the second reason is that all of these plants, every single one of these plants around us have fungi attached to their roots.
SHAPIRO: These mycorrhizal fungi – species like Amanita brunnescens here in this woodland – associate with 90% of the plants on Earth. They ensheath the roots. Or sometimes they grow in between root cells. These fungi absorb water and nutrients from the soil, and share them with the plant. In exchange, the fungi get some of the sugars pulsing through the plant roots.
BODDY: It’s plants plus fungi that make the ecosystems of our planet work.
SHAPIRO: Plants are, I mean, I think of them as independent beings, you know, they just need the sun in order to survive, but you’re saying that they wouldn’t stand one minute without fungi.
BODDY: That’s absolutely true.
SHAPIRO: In fact, Boddy says that plants needed fungi to be able to colonize land 450 million years ago. So fungi both nourish and destroy. They pump vital fluids rich with nutrients into the very ecosystems that other fungi will later carve up and consume. They digest the dead, leaving behind the raw materials for new life to be born. And it just takes getting your hands a little dirty to trace the weave of their vast network.
BODDY: Ok, look here! Now, oh, that’s interesting, isn’t it?
[RUSTLING THROUGH LEAF LITTER]
SHAPIRO: For Living on Earth, I’m Ari Daniel Shapiro.
CURWOOD: Our story on fungi is part of the series, One Species at a Time, produced by Atlantic Public Media, with support from the Encyclopedia of Life.


One Species at a Time