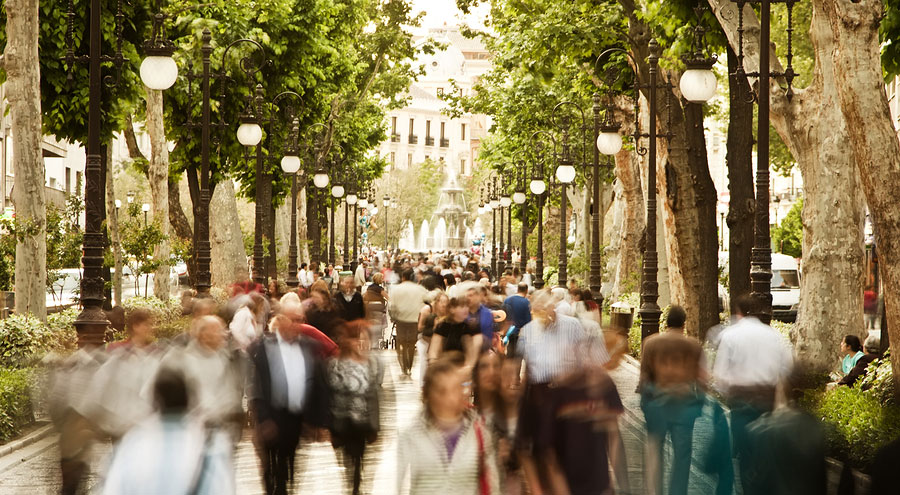 Despite robust and rising ridership, many transit systems around the country are deeply mired debt, and Boston’s MBTA is a prime example. But there is a way out, according to Christopher Leinberger, a developer and professor at George Washington University. He has a plan called “value capture” that would use transit-related real estate profits to solve the MBTA’s fiscal problems and reduce Boston’s carbon footprint to boot. Leinberger discusses his plan with host Steve Curwood.

CURWOOD: It’s Living on Earth, I'm Steve Curwood. As more and more people move into walk-able city centers, public transit ridership is on the rise - and under stress.

Nowhere is the trend more stark than Boston, home of the nation’s first subway system.

WOMAN: This morning I was on the 6:00am Heath Street train and there was a broken down car ahead of us and we had to get off of three different trains and back on, and everyone on the train was late for work. They did a lot of service cuts recently, I feel like they’re just short on people or something. I don’t know, but it’s definitely been way worse than what I’ve experienced in the past few years.

MAN: I actually waited last week for like a half an hour for a B-line train, I think. I saw a bunch of other trains go by and then mine came and it was so full that I had to wait for the next one. And then the next one came and that was even still full so I just squeezed my way on, shoved my way on.

CURWOOD: Despite the boom in ridership and a recent fare hike, the Massachusetts Bay Transportation Authority is in deep financial trouble, with some routes strained to the breaking point. The combination of debt, operating deficits, long deferred maintenance, and growing ridership looks like an intractable problem, especially with governments' budgets squeezed.

But there is a way to finance operations and expansion that taps the profits that transit can bring to business, according to Christopher Leinberger, a George Washington University transportation researcher. He says - think of transit attached to walkable districts as a means of sustainable economic development that then helps pay the transit tab, and fights climate change.

LEINBERGER: Transportation, whether it be roads or rail transit, or bike lanes, have always been subsidized. The airlines have been around 100 years, and the net profit that those airlines have made in that 100 years, is zero, the few good years get offset by crushing losses. The question is – who pays? We have a situation where the federal government is not going to play its historic role funding a significant amount of mass transit, the state governments are in the same situation, so where does that money come from?

They built them to get their customers out to their land, so land profits subsidized the transit, and that’s what we’re proposing with value capture as well. Value capture is capturing the value that’s created by transportation improvements. And it’s not as if you can just assume that developers are just going to pay for it all, that’s not going to happen. Think of it as a layer cake of different financing sources.

CURWOOD: So, tell me, how could this concept of value capture work for existing transit systems? Consider Boston for example, the fare box just pays for the debt, but businesses have been getting the MBTA for free, so why would they now want to pay?

LEINBERGER: Because they could get increased density, possibly. So that you could go to the existing property owners and say, ‘we will zone a higher density for you. In exchange, we want a piece of that upside to help pay for either the operations of or the capital improvements of the rail system.’

CURWOOD: Let’s focus for a moment more on new transit systems – how does value capture work exactly for those new routes of mass transit?

LEINBERGER: With a new system, such as the new line that’s going out to Tyson’s Corner in northern Virginia from downtown DC, about a third of that cost is being paid for by the property owners at Tyson’s. Tyson’s, 25 years ago, led the market in DC, the highest rents, the highest absorption, they were the king of the hill. Today, they’re near the bottom, and that’s because the market wants more walkable, urban, higher-density places.

So, the Tyson’s developers, very intelligently, said they have to bring metro out to Tyson’s. And so they taxed themselves to pay for about a third of the cost of that very expensive rail system. Another way is the New York Ave. metro station in DC, a bunch of developers got together and said: We’d like to build a station, and we so need this station that we’re willing to pony up, again, about a third of the cost, and they put the money upfront.

And I’ve talked to one of them recently and he says it’s the best investment he’s ever made because money in that metro station increased the value of his land so much that he made a phenomenal return on that investment. 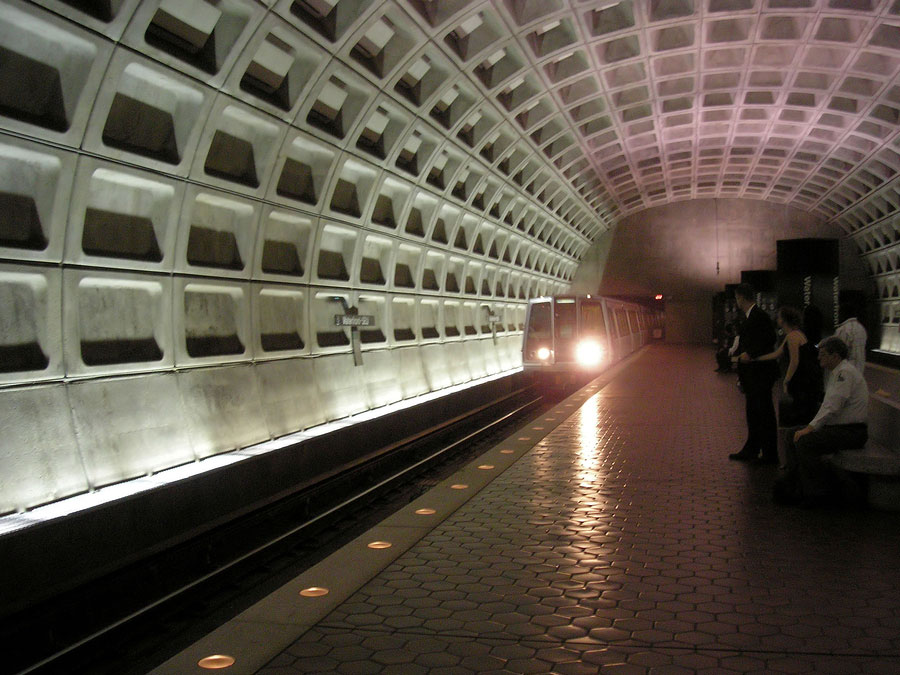 CURWOOD: What about Boston? Boston wants to extend its green line out from the Lechmere area out to Somerville. How could value capture work for that new route?

LEINBERGER: Well, there’s a number of new developments that are being proposed along that green line, and there are some very substantial developers that are proposing it. They too could help pay for the stations and they could also cut a deal with the MBTA to maybe share a piece of their financial upsides to help pay for the operations.

Because, with transit, you’ve got both the issue of capital costs and operating costs – most systems, the operating costs are not even covered by the fare box and then you have to find separate sources of funding to pay for the capital costs, and that’s just the way it is, so we have to deal with that.

CURWOOD: What’s the formula for having this economic success. If you bring a transit line to a certain place, what needs to be there to get the development that you say, and how critical is walkability?

LEINBERGER: Walkability is driving this. Walkable urban places have a significant price premium over drivable suburban, and so much so that the variability in economic performance, about 2/3s of it is explained by how walkable it is. It’s a major economic driver. The other two, by the way, happen to be job density and work force education level, how many people have their college degrees. That explains over 90 percent of the reason why these walk-able urban places perform so well economically. 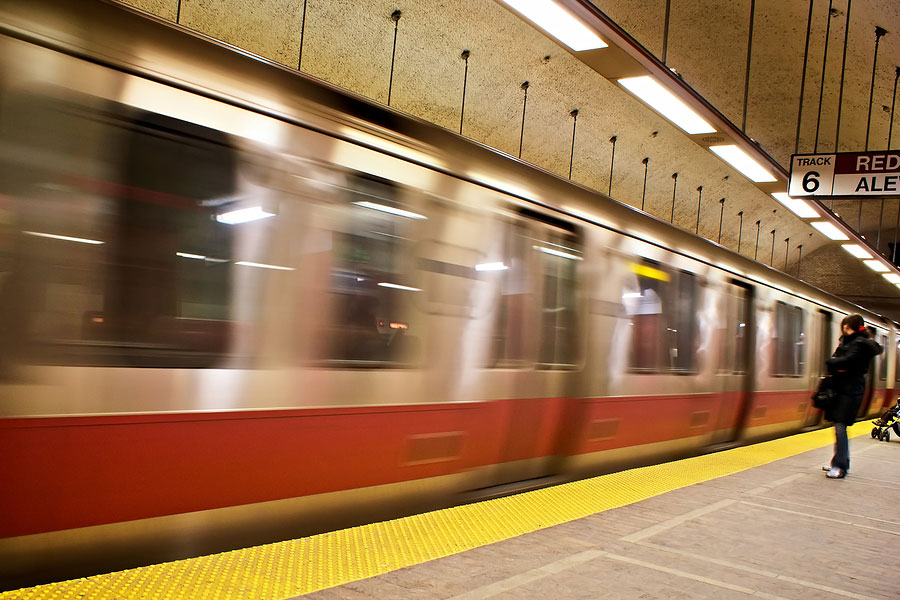 A passenger waits for the T in Boston (photo: bigstockphoto.com)

CURWOOD: How does Boston move forward? What do you recommend?

The center city is growing and the suburbs are not just not growing, they may be shrinking. The market would love to have those nodes of energy out in the suburbs as well, and right now, in Boston, it’s illegal to build high-density walkable urban places around your subway stations and around your commuter rail lines. And oh, by the way, I believe walkable urbanism, the building of great walkable places, will be the number one way we’re going to address climate change.

You may remember, two years ago in Washington, it was legal to talk about climate change, but 99 percent of the discussion was about supply efficiency. Very important topic, as far as renewables, as far as increased efficiency of our cars, but the other side is demand mitigation ¬– providing places to live that by their very nature do not require the burning of fossil fuels. We’ve known for a long time that of climate change gases, about 75 percent of them are generated by either buildings or the transportation systems we use to get between our buildings. More research needs to be done to confirm this.

But if you move a drivable suburban household out there on the fringes of Boston, into Cambridge, and they move into a townhouse or into a condo, you will reduce their household energy consumption and greenhouse gas emissions by about 50 and 75 percent. So with that huge reduction in the built environment, this could conceivably be the number one way we are going to address climate change.

CURWOOD: Christopher Leinberger is a professor at George Washington University, and President of Locus, part of smart growth development. Thank you so much, sir.