Rethinking the "Debate" Over Climate Science 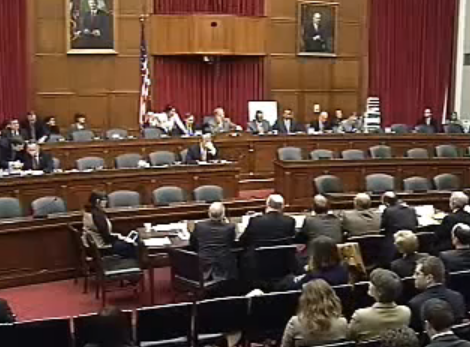 Another House hearing on climate change science fails to convert conservatives to the climate convinced camp.

As Republicans make progress on efforts to block the EPA from regulating greenhouse gas emissions, Democrats are fighting back with science. But a recent hearing on climate change science did nothing to change partisan disagreements over the reasons for planetary warming. Living on Earth's Washington correspondent Mitra Taj reports the divide over climate change may not always be about the science.

GELLERMAN: From the Jennifer and Ted Stanley Studios in Somerville, Massachusetts, this is Living on Earth. I'm Bruce Gellerman. House Republicans are working hard to keep one of their major campaign promises. They're making progress on rallying support in Congress for legislation that would strip the Environmental Protection Agency of its ability to regulate greenhouse gases. Michigan Republican Fred Upton is author of the bill.

UPTON: EPA's regs are a backdoor attempt by unelected bureaucrats to implement the highly unpopular cap-and-trade legislation that was rejected just last year.

GELLERMAN: Upton says getting the bill passed is one of his top priorities. He calls it the Energy Tax Prevention Act. But as Living on Earth's Mitra Taj reports, most Democrats just call it an attack on science.

TAJ: Congress has held dozens of hearings on the science of climate change, but Representative Henry Waxman, the ranking member of the House Energy and Commerce Committee, wanted one more. He says the Republican-sponsored EPA bill attempts to rewrite science.

WAXMAN: The Upton-Inhofe bill would remove EPA's authority to protect the American public from carbon pollution and the impacts of climate change. The bill would legislate a scientific finding out of existence, and it would remove the administration's main tools to address one of the most critical problems facing the world today.

INSLEE: In listening to this hearing, I am convinced that if we had Copernicus, Galileo, Newton, and Einstein at this table instead of you fine scientists, one of these parties would still not accept the clear science until the entire Antarctic ice sheet has melted or hell has frozen over, whichever comes first.

GRIFFITH: Why are the ice caps on Mars melting? Is it in fact - and has there been a study - a shift in the orbit of Mars, or is it that the sun is putting out more radiant heat?

TAJ: By the end of the hearing, no one had changed their views.

TAJ: The science of climate change has turned into a partisan issue. Polls show that more than three quarters of Democrats across the country trust the science, compared to about a third of Republicans. And now with the recent influx of climate skeptics into Congress, climate action advocates are rethinking the merits of engaging in the so-called "science debate” at all.

SCHMIDT: You know, most of the Congressman don't actually want to discuss the science, and the ones that did really made a bit of a hash of it, and that's okay - they're not scientists.

TAJ: Gavin Schmidt IS a scientist. He makes climate models for NASA, and keeps tabs on climate science misinformation on the blog RealClimate.org. He says policymakers should just cut to the chase.

TAJ: New findings from the social sciences support Schmidt's instincts that the fight over climate science is a distraction. Business professor Andrew Hoffman has written a new paper on the topic. He says the divide over climate change is starting to look like abortion or gun control - another intractable culture war.

HOFFMAN: If we can move the debate away from those that would like to divide us and towards the middle of people who really want to reason this through, then I think we'll have a more fruitful conversation.

TAJ: Hoffman says there are lots of ways to frame the debate so conservatives aren't put off. When policymakers discuss solutions, they could invoke morality, national security, or jobs.

HOFFMAN: Renewable energy is a burgeoning viable sector within the economy, and to label it green - and the word "green" itself in many cases is like a red flag in front of a bull - a lot of people hear green, they hear liberal, left-leaning. So I think green tech, green jobs”¦really people hear that on a particular end of the spectrum and just hear social agenda - intrusion in the market. And you know, I think it's interesting with the evangelicals - those that are saying we need to attend to climate change will not call themselves environmentalists. That's liberal. They are caring creationists.

TAJ: But others think the key to victory will be a simple message and persistence. David Roberts blogs on politics for the environmental website, Grist.org.

ROBERTS: There's no coordination and repetition and that's what gets a message over, not cleverness. You know, I mean I know everybody's in love with framing and everything now and there are important ways in how you frame things and appealing to emotions and narrative - that stuff matters. But on the other side, there's just this drumbeat: tax, tax, tax, government, government, government. It's very simple. It's been established for years. All they have to do is invoke it.

TAJ: Since the so-called “Climategate” scandal, scientists have been in damage control mode. Chris Mooney, an author who focuses on the challenge of science communication, says reinserting reality into the debate over emissions cuts could lend it urgency.

MOONEY: The way the issue's been talked about I really think that to some extent you do have to face head on the question of whether it's happening or not. Because if you don't think that it's happening, these kinds of solutions don't seem as pressing. Right - I mean, why do we need to remake the economy and green it and invest so much in renewable energy if we're not warming the planet? Why shouldn't we just burn all the fossil fuels? I mean, if they're not causing it, what's the big rush?

TAJ: Even if it passes the House, the EPA-blocking bill faces an uphill battle in the Senate, and a promised veto from the White House. But while efforts to overturn greenhouse gas regulations might be stopped, the gap between climate science and political science persists. For Living on Earth, I'm Mitra Taj in Washington.