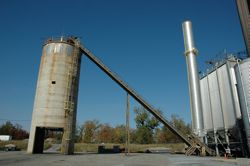 The country is looking for alternatives to fossil fuels, and some power companies are seeing a solution in biomass - electricity from the burning of wood and plant materials. While regulators consider biomass a renewable energy source, some scientists say it could be worse for the climate than coal. Living on Earth's Mitra Taj reports on the ongoing debate over biomass' emissions.

GELLERMAN: It’s Living on Earth, I’m Bruce Gellerman. Generating electricity produces about a third of the nation's climate changing emissions. Much of that comes from aging coal-fired power plants.

Now, for the first time ever, the Environmental Protection Agency is taking steps to stem the flow of greenhouse gases from utilities. But NOT those that come from burning biomass - wood chips, forest waste and other plant material. Biomass is widely considered a renewable energy source, but its green credentials are being called into question. Living on Earth’s Mitra Taj reports.

[SQUEAKY NOISE, INDUSTRIAL SOUND UP AND UNDER]

TAJ: Not far from the heart of coal country in Virginia, a power plant is busy churning out the kind of energy that lights up your home, eighty mega watts of electricity—enough to meet the needs of about 20,000 households.

[OUTSIDE SOUND, TRUCKS PASSING AND BEEPING]

TAJ: Just outside the plant, it smells like cut pine, and truck after truck drives into the yard bearing big loads of little pieces of wood. They’re dumped onto a giant pile that’s fed into the plant’s boilers.

HELTON: That’s about seven days of fuel for the plant.

TAJ: John Helton is the station manager for this Dominion biomass power plant near a small town called Hurt. The wood chips, he says, are a byproduct of nearby logging operations. Trees that would otherwise be burnt or thrown out as waste come here.

HELTON: We’re buying the wood that comes in, and they scale in. It has a barcode system, so it’s automatic, and then they scale out. This is the largest biomass plant in the state, and one of the largest in the country. 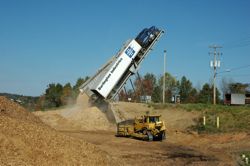 At Dominion's Pittsylvania biomass plant in Hurt, Virginia, a truck dumps wood chips into a pile to be burnt to generate electricity. Each truck carries about 22 tons of woody material. (Photo: Mitra Taj)

TAJ: Dominion bought it in 2004, and is building another biomass plant in southern Virginia now. Nachy Kanfer of the Sierra Club says biomass has caught the eye of power companies like Dominion that are watching as new regulations on pollution turn their inefficient, coal-fired power plants - into liabilities.

KANFER: Coal power is more expensive to run and it’s still just as dirty as before. So, a company like Dominon or like most utilities in this country are looking at their coal fleets and saying—how do we get this coal power offline before it starts really doing damage to our bottom line? So they’re looking at biomass as one possible solution to that.

TAJ: With a few fixes, instead of working with dirty coal, a utility can work with trees. Instead of contributing to climate change, it can be part of a clean energy solution. At least, on paper.

Most regulators treat biomass as a renewable, but some scientists say it shouldn’t be. After all, carbon dioxide makes up about half of most trees, and burning them releases it. Growing trees back to be big enough to suck up substantial amounts of carbon takes decades, and that’s if they’re replanted at all.

Mary Booth, a carbon cycling scientist with the Massachusetts Environmental Energy Alliance, says in practice biomass can be worse than coal.

BOOTH: Trees and forests are really our best defense against climate change right now. Forests currently sequester a large proportion of greenhouse gas emissions from fossil fuels right now, so cutting those forests and burning them and liquidating that carbon into the atmosphere makes no sense at all from a climate change perspective.

TAJ: The key to whether biomass can be truly renewable is whether the wood burned in power plants would go to waste anyway. If a logging or pulpwood company burns its waste wood as trash or lets it decompose, it’s already emitting carbon dioxide. So no harm done from using the material for electricity. No additional emissions to the atmosphere. But there are no federal regulations that require biomass come from waste wood, and even if there were….

BOOTH: The definition of what is to be considered waste wood is really in the eye of the beholder. And we’re seeing a lot of things defined as waste wood that might otherwise not be considered to be that.

TAJ: Biomass started as a money saver for the paper and pulp industry in the 1980s. Instead of throwing away woody waste, companies started burning it to save on their electricity bills. But today biomass has become crucial to efforts to cut greenhouse gas emissions. More than 20 states mandate utilities supply more renewable electricity. There are state and federal tax credits for renewable energy production - and regional cap-and-trade programs on both coasts discourage CO2 emissions.

CLEAVES: It’s widely believed that without biomass we won’t get near our goals.

TAJ: Bob Cleaves is the head of the industry-lobbying group the Biomass Power Association.

CLEAVES: Take the commonwealth of Massachusetts as an example. Right now biomass is 30 percent of that state’s renewable energy supply, and so if biomass were to go away, that would make it nearly impossible not only to meet future targets but you’d see it would set back the effort to green the country’s energy supply significantly.

BOOTH: Indeed, it is discouraging to think that a large fraction of the renewable energy that we’ve been promised we can deploy isn’t going to help with our need to reduce carbon emissions but the best tonic for this is just to deal with the reality and go back to the drawing board and redouble our efforts in other arenas. Because the last thing we would want to do is incentivize something as renewable energy that actually makes climate change worse.

TAJ: Half of the country’s renewable electricity now comes from biomass. There are about 100 plants generating power from biomass in about 20 states, and consumption of biomass power to more than double by 2020.

That biomass is given the same incentives as solar and wind frustrates some environmentalists who fear the growing demand for it won’t just help heat up the planet, it could also wipe out the country’s forests. But Bob Cleaves says that argument doesn’t make any economic sense.

CLEAVES: If you were to clear cut forests, causing deforestation, I don’t think anyone thinks that that’s sustainable, and no one would say that’s — quote -- carbon neutral. Fortunately, no one does that. It’s not economically rational to take a tree, chip it and burn it in a boiler, because you would never do that from an economic standpoint. And we don’t think the economics are going to change substantially.

TAJ: Even in a carbon-constrained future?

CLEAVES: Certainly in theory if the country placed a price on carbon that was dramatically different from what people are modeling right now, or if carbon were valued at $100 a ton for example, could that in theory happen? Sure. Do we think it’s going to happen? No. Nor do we encourage it as an industry.

TAJ: The EPA says it needs until 2014 to study the science of emissions linked to biomass before deciding how to regulate them. In the meantime, it can issue permits for biomass plants that will be exempt from greenhouse gas regulations in the future. The agency’s decision has pleased the Biomass Power Association, and the more than two-dozen members of Congress who petitioned the EPA in support of the industry.

Many are swing votes for the kind of clean energy legislation the Obama administration hopes to pass in this Congress, which could, in turn, give another big boost to biomass. For Living on Earth, I’m Mitra Taj.


For more on Mary Booth's work on biomass, click here.

Click here to read about how a power company in Ohio backed out of its plans for more biomass.