Drought, flood, record heat and record snow--this year had it all. Living on Earth’s Jeff Young asks weather experts whether climate change pushed these extreme events. Their answers carry a warning about the weather of the future.

CURWOOD: It’s Living on Earth, I’m Steve Curwood. The other day it was colder in southern Florida than northern Maine, while some western states had just set daily records for high temperatures. It’s been that kind of year-- extreme. Twenty-ten is bidding to go in the record books as one of the warmest, but it’s the craziness of the weather, rather than just the heat that has scientists concerned. Twenty-ten, they say, stands out for the number and intensity of extreme weather events. It appears climate change is tilting the odds in favor of more of the kind of heat, floods and even snows that 2010 brought us. Living on Earth’s Jeff Young has our story.

YOUNG: Jeff Masters has seen some pretty wild weather. As a hurricane hunter in the late ‘80s, he flew into the teeth of some of the biggest, baddest storms. Then he co-founded the internet forecasting site, Weather Underground. There he keeps track of extreme weather events. And Masters says 2010 is the most extreme yet.

MASTERS: In my 30 plus years of being a meteorologist I can’t ever recall a year like this one as far as extreme weather events go, not only for U.S. but the world at large.

TRENBERTH: Isn’t that interesting, we have a one in a thousand year event happening every few years nowadays.

YOUNG That’s Kevin Trenberth, a meteorologist who leads the Climate Analysis Section at the National Center for Atmospheric Research in Boulder, Colorado.

TRENBERTH: And so, it’s the changes in extremes where we notice the climate change. Droughts and floods and heat waves that are outside the bounds of what we’d normally expect. The global warming component is rearing its head in that way.

YOUNG: And 2010 could be a harbinger of things to come, says Heidi Cullen, a climatologist with the non-profit research group Climate Central.

CULLEN: I actually do get a sense that we are really getting glimpses of what the future will look like through some of these extreme events that we’ve experienced.

YOUNG: I asked these three experts, Cullen, Trenberth and Masters, to choose their top examples of the year’s weather extremes. Their list tells us a lot about the interplay of climate change and weather. And it carries a warning about the storms on the horizon for coming generations.

YOUNG: This snowball battle in Washington’s Dupont Circle wasn’t the only fight the snow brought on.

CBS SNOWSTORM NEWS CLIP, SAWYER: That war of words over what this storm means for global warming…

LIMBAUGH CLIP: It’s one more nail in the coffin for the global warming thing.

YOUNG: The Capitol’s most prominent climate change denier, Oklahoma Senator James Inhofe, got attention with an igloo on the national mall.

INHOFE: They put a sign on top that said Al Gore’s new home!

YOUNG: But climate expert Kevin Trenberth says the Senator’s take on the storm is, well, a bit of a snowjob. Increased precipitation events— whether rain or snow— are just what computer models of climate change predict.

TRENBERTH: That’s actually very much a symptom of warmer sea temperatures off the coast that are providing extra moisture to produce that huge amount of snow. It’s not a sign that global warming is not here, quite contrary in fact.

NEWS CLIP: Massive flooding left at least a dozen dead. Thousands of people have been evacuated after an astonishing 13 inches of rain fell in a two-day period.

MASTERS: That rain event was equivalent to a one in 1000 year event.

MASTERS: You have to go back to the civil war to look at any kind of disaster that effected Tennessee as great. The city of Nashville was basically underwater. And I might add that the record high temperatures were set up and down the coast in the few days accompanying that storm event. And, again, when you have record high temperatures you can have record amounts of water vapor present in the atmosphere capable of causing heavy rains.

YOUNG: By mid summer it was the heat Masters was tracking, first in the eastern U.S.

MASTERS: Well, the record heat was concentrated in mid Atlantic region again, so not only did they have snowmageddon, but they had their hottest summer on record in the DC area. Maybe the legislators there were trying to be told something! I don’t know…

YOUNG: Then in September the West Coast felt the heat.

YOUNG: Through October, more than 41 hundred record highs were reported around the U.S. About 15 hundred record lows were posted in the same time, a high-to-low ratio of about two point five to one. But the U.S. heat wave paled compared to what much of the rest of the world endured this summer.

NEWS CLIP: Forest fires have killed at least 25 and left thousands homeless in central Russia as heat wave grips much of the country. 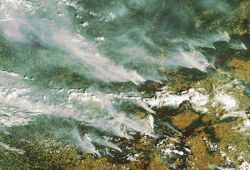 CULLEN: What we saw happen in Russia this summer was so fascinating, because we saw it had global reach, right. They stopped exporting wheat; they lost essentially 30 percent of their wheat yield. And, from a statistical standpoint, those kinds of statistics just fascinate me. When you look at the July temperature anomaly in Moscow since 1950, technically, it was essentially like a one in 100,000 year event that’s how intense it was. I mean it was just off the charts.

YOUNG: Eighteen countries set records for high temperatures. Jeff Masters mapped them as the extreme heat covered more and more of the planet.

MASTERS: The warm temperatures covered a record amount of the earth’s surface. We’ve never seen 20 percent of the earth’s surface experience their all-time record high in one year. Now, that’s not to say every point in those country set an extreme record, but certainly in Russia, a good portion of Russia hit their all time extreme records. In Pakistan they hit 128 and a half degrees Fahrenheit, which is the hottest ever recorded in Asia. And, Southeast Asia hit its highest with Burma over 116 degrees this summer.

YOUNG: Masters says the same rare weather pattern that baked Russia—a sort of kink in the jet stream over Asia—also had another effect.

MASTERS: And so, again, all that heat allowed for more water vapor to evaporate into the air and caused heavier precipitation than would have otherwise would have happened.

NEWS CLIP: Southern China has been devastated by floods and landslides caused by weeks of torrential rain. In Schizuan province some parts were hit with the heaviest flooding in more than 150 years.

YOUNG: First China, then, Pakistan. Some 20 million people were affected in Pakistan, as roughly a fifth of the entire country was underwater. 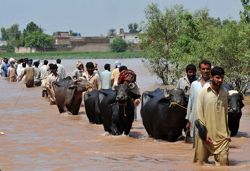 Pakistanis fleeing floodwaters. At one point, one-fifth of the nation was underwater. (UN Development Programme)

MASTERS: In Pakistan it was that nation’s Katrina. It was their worst natural disaster in history.

YOUNG: This is by no means an exhaustive list for 2010’s weather extremes. The Atlantic hurricane season was also very active, and the Pacific saw a shift from the periodic warming known as El Nino to the cooling called La Nina. What climate and weather experts like Masters, Cullen, and Trenberth see in this year’s wild weather is a mix of natural variability and a changing climate. NCAR’s Kevin Trenberth says the natural variability still reigns supreme.

YOUNG: So, journalists seem especially prone to asking this question when there is, say, a big flood or heat wave, and we want to know is this global warming-- What do you say?

TRENBERTH: That’s really not the right question because we can’t attribute a single event to climate change, but I would contend that every event has a climate change component to it nowadays. And a different way of thinking about it is try to look at odds of that event happening. And, with some of the events that we’ve had this year it’s clear-- even though the research has not been done in detail yet-- that the odds have changed, and we can probably say some of these would not have happened without global warming, without the human influence on climate.

YOUNG: Climate Central’s Heidi Cullen agrees. She likes to say, there’s no lone gunman theory of climate change causing weather events. But the data can reveal warming’s extra push. That’s just what scientists were able to do in a study of the deadly heat wave that gripped Europe in 2003. Cullen says they ran two models, one with a steady, unchanging climate, another with a climate altered by greenhouse gas emissions.

CULLEN: In that world where we have had our fingerprint through fossil fuel burning and deforestation, that world produced a heat wave like the one we saw in Europe with a much greater frequency. So, global warming doubled or possibly quadrupled the chances of that event happening.

YOUNG: Cullen writes about that study in her book, “The Weather of the Future.” She explores what studies like that can tell us about the weather to come.

CULLEN: They showed that by 2040 the 2003 type summer we saw in Europe would likely be happening every other year. And by 2070 the European heat wave of 2003-- that would be a relatively cool summer. And so I think that when you do that thought exercise and fast forward through time, you begin to really see how big of a problem this becomes for society.

YOUNG: That 2003 heat wave, Cullen reminds us, killed more than 30 thousand people and cut crop harvests by nearly a third.

MASTERS: This year makes me nervous, it really does.

MASTERS: Two thousand ten could very well be the sign that the climate is beginning to grow unstable. That’s what we’re bequeathing to our kids. I have a 14 year old as well, that I think is going to be looking back fondly on years like 2010 saying, ‘Oh, it wasn’t so bad back then.’

YOUNG: You can hear more from these weather experts and see the weather and climate data and studies mentioned in this story at our website L-O-E dot org. For Living on Earth, I’m Jeff Young.


Extended interview with Jeff Masters on the wild weather of 2010, how melting Arctic ice affects US weather, and how climate change is “loading the dice” for the chances of extreme weather.

Comparison of record highs and lows in the US

Study of global warming’s contribution to the 2003 European heat wave.