The plan to pay developing nations to save their forests and the carbon in them is potentially worth billions of dollars under the UN scheme called REDD, Reducing Emissions from Deforestation and Degradation. Nearly $4 billion dollars is already on the table, and this cash has attracted both conservationists and criminals. Host Bruce Gellerman follows the money with Davyth Stewart, of the anti-corruption watchdog group, Global Witness.

CURWOOD: From the Cancun Climate Summit, this is Living on Earth. I’m Steve Curwood.

CURWOOD: Well, if Sutton was alive and thieving today you might find him in a forest - because that’s where trees store trillions of tons of carbon potentially worth billions of dollars. The UN mechanism known as REDD is designed to put a price on forest carbon so the owners have an incentive to keep trees standing instead of cutting them down.

Already there’s some four billion dollars for REDD projects on the table – and that could increase to 25 billion a year if climate negotiators can agree on how to implement and monitor REDD.

GELLERMAN: Davyth Stewart is a carbon crime buster - he investigates natural resources corruption with the London based watchdog group Global Witness, and is attending the UN climate summit. 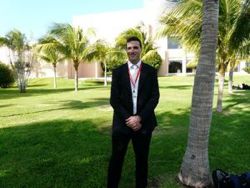 STEWART: It’s the kind of area you would think of investing in if you were an organized criminal. There’s certainly organized crime looking at REDD as a potential market to become engaged in. There’s going to be a lot of money coming in from the climate change process. And, a lot of the places in which the money is moving into countries with serious corruption risks, with poor countries with poor law enforcement, poor regulations. It’s easy to move in and move money around and manipulate the system to take advantage.

GELLERMAN: So, if you were a nefarious person, and wanted to take advantage of the proposed REDD scheme, the scheme to protect trees and keep their carbon stored and locked in there—how might you do that?

STEWART: I’d be particularly interested in countries that don’t have clear land tenure, where ownership of the land is unclear, in which it’s very easy to manipulate land ownership. And so it’s who owns the land is going to own the resource. And we now have carbon as a commodity, which people are looking at and is now far more valuable.

GELLERMAN: How much money are we talking about?

STEWART: We’re talking 15-20 billion dollars a year within the next five to ten years.

GELLERMAN: So, it’s really where the money is!

GELLERMAN: You know, there have already been cases where people have tried to corrupt the system, and they’ve succeeded in some cases.

STEWART: There’s reports of carbon cowboys moving into Papua New Guinea trying to manipulate the system to take ownership of land, or have local landowners sign over their carbon rights and in some cases through the threats of violence.

There are reports in Papua New Guinea of the Office of Climate Change issuing carbon credits, even though there was no legislation in place. There’s an investigation into some British-based companies that are looking at entering into agreements with governments over ownership of the carbon or the ability to trade the carbon on international markets. And, there are reports of bribes being paid—of not fair prices of carbon being paid, and people taking advantage of weak government systems.

GELLERMAN: So are there international laws against this? Do we have a system for monitoring it and for punishing people?

STEWART: At this stage we don’t. It’s mostly done on the voluntary carbon market, so all of this activity that’s going on now is people getting in early in preparation for the big money that’s coming.

So, there isn’t any mechanism that can monitor it, that can ensure that it’s being done according to any international standards, because there are no international standards at this point. And, it’s an issue that we in Global Witness are advocating further involvement of law enforcement agencies at the beginning in helping to design the system so that there aren’t loopholes, that the system is implemented in a way that it can be easily enforced, rather than trying to fix it up afterwards, too late.

GELLERMAN: So, is it possible that this conference will come up with a mechanism, a REDD mechanism to save the carbon in trees, but then when nefarious types, people with less than noble motives, move in, that nothing will happen. There will be no stored carbon and the money will just disappear?

STEWART: It’s quite possible. There’s a genuine push by many to get a good deal here at these climate change talks, in which there will be a strong regime to protect the forests. But, there are also many other vested interests involved in this process looking for a deal on forest protection that isn’t necessarily in the interest of the environment, but is in their own vested interests.

If there’s a lack of safeguard in the agreement that we come up with, it may well end up subsidizing palm oil plantations. And, particularly scary, is that it may provide incentive to actually chop down natural forests and replace it with palm oil plantations. It’s the lack of these sort of safeguards that undermine the environmental integrity of this sort of agreement.

GELLERMAN: So, how close are they to building in the safeguards that you’d like to see?

STEWART: We have some relatively strong language around the safeguards, but in terms of actually implementation there’s a lot of weak language. And that’s the really important issue that we have to get right at these climate change talks.

GELLERMAN: Well Davyth thank you very, very much, I really appreciate it.