The Legend of Pale Male

New York is known as a city of strangers. But that changed when a redtailed hawk made his home on the ledge of one of Fifth Avenue’s ritziest buildings. People from all walks of life flocked to a bench in Central Park to view the trials and tribulations of the bird named Pale Male, forging a bond and a new community. Frederic Lilien was one of Pale Male’s followers. He tells host Bruce Gellerman about the hawk, the city, and the love story which he documented in his feature-length film “The Legend of Pale Male.”

GELLERMAN: This is a tale of two immigrants: One, a young man from Belgium, who decides to move to New York City in the early 1990s, seeking not fame nor fortune, but his fate. The other is a bird of prey -- a Red-tailed Hawk the likes of which hadn’t been seen in the city for a hundred years.

LILIEN: He was a Red-tailed Hawk, completely wild…a stranger to the city like I was, but he was no lost soul. 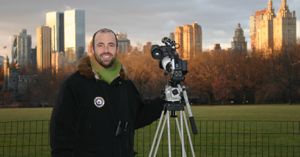 GELLERMAN: Man and hawk both had high expectations. The hawk soon took up residence on a 12th floor window ledge of a Fifth Avenue apartment. For the man, moving up in the world was a bit slower. When Frederic Lilien and the bird’s paths crossed, both lives took a dramatic turn. The story of the Red-tailed Hawk known as Pale Male is documented in Frederic Lilien’s new feature-length film “The Legend of Pale Male: a hawk, a city, a love story.” Frederic Lilien, welcome to Living on Earth.

LILIEN: Thank you. Thank you for having me.

GELLERMAN: Why did you decide to come to New York City in the first place?

LILIEN: Huh. I guess I was out of options. I was in Belgium and, you know, failing in my law studies and decided to leave. And, my God, there’s no better place to go than New York City. And, I wrote a letter to my father saying that I would go for a few months and see for myself, and I eventually stayed fifteen years.

GELLERMAN: So, you’re in Central Park and you stumble across this bird that’s soaring overhead and it changed your life.

LILIEN: It did. And, I must say at the time I was working as a floor manager of a hair salon on the Upper East Side, and, my God, it was hell on earth. I really hated that job. And, whenever I could escape I would go and eat my lunch in the park. And, one day, I just looked up and here he was eating his own lunch and I guess that day, I decided I would quit my job and buy a video camera and become a wildlife filmmaker.

GELLERMAN: You know, we should say that you might have been a better manager of a hair salon than you were a film maker.

LILIEN: Well, it took me quite a long time, but I guess sometimes in life you need those crazy moments to do something. It was probably a very old dream that was buried inside of me and being in New York helped.

GELLERMAN: Well, you know this city is a place of serendipity. You had a meeting with a guy named Charles Kennedy and he winds up changing your life.

LILIEN: Yes, absolutely. So, here I am with my little camera trying to run and find this hawk in this huge park, and I wasn’t very successful at it. And then one day I saw this guy with this huge camera, beautiful lens, 500mm lens, and of course my first reaction is “Oh my God, that guy, he’s stealing my idea!” And, he came to me with a big smile and it’s the kind of person that understood the whole picture here. And right away, he said, “What are you doing? Oh, well I have this lens if you want, you can borrow it.” And, oh my God, did I borrow it. I borrowed it for years and years and years. But most of all I should say we became very, very good friends.

GELLERMAN: I think we should say that he was watching this red-tailed hawk a lot longer than you.

LILIEN: Absolutely. I mean, he was sort of an expert. He spent all his days in the park learning about all of the birds, the butterflies and the moth, and of course, Pale Male was his favorite. Because, that bird had something very special.

MAN 1: This bird is a pioneer. And, he has to make a rather magical accommodation. He has to adjust to humankind. But, if he does that, his reward is immense. There are pigeons here, there are rats, songbirds and squirrels. It is an amazing choice, and very rich, and all he has to do is get along with us.

GELLERMAN: He can get along fine with the people, but Pale Male takes up residency in one of the ritziest locales in New York City- on Fifth Avenue- and the question is, can we get along with him?

LILIEN: Uh, yes. Absolutely. I mean, he’s the first of his kind to come into the big city and decide: ‘I’m going to make it here.’ I guess like any other bird or any other animal, it’s all about survival. But this one did it with panache and everything, everything about this bird is just special and different- and what a story! I mean, the best script-writer in Hollywood could not come up with a story like this.

GELLERMAN: But this is a story not only about you and a hawk, it’s a story about a city, a community. It’s interesting because the city that you portray is one that strangers come together in a way that they ordinarily don’t.

LILIEN: Yes, and it’s probably the magic of Pale Male is because of him that people would sit on a bench. And, I believe in a way that observing nature, or living in nature, with nature, will make you a better person.

WOMAN 1: I have a cockatiel that’s living in the window on the 9th floor between Madison and Park Avenue. And, all of a sudden, I hear my bird go crazy and I see this huge hawk on my windowsill. I took the bird on my fingers to calm it down and it didn’t die, but I think he might have had a shock!

WOMAN 2: It’s almost like seeing the Virgin Mary in a tree or something, you know. I mean, why do people go to see something that’s an image of…It’s almost religious in a way that I come and see him now.

Pale Male with a stick. (Credit: Courtesy of palemale.com)

MAN 3: To see a father hawk, or a mother hawk bring a rat to his baby- it’s wonderful- it’s biblical!

GELLERMAN: These are real New York characters, right out of central casting!

LILIEN: Oh, yes, New Yorkers are the best. (Laughs). They are amazing. I mean to me… and I guess I understood that after a few years of trying, what I was trying to do that the story wasn’t necessarily up there in the nest, but was right here on the bench. And, Pale Male had become this fantastic way to explore what nature could do to us, and how people perceive it.

Pale Male lands on his nest. (Credit: Courtesy of palemale.com)

GELLERMAN: Is Pale Male still sitting atop 927 on Fifth Avenue?

LILIEN: Absolutely. So, he’s not giving up. I mean, he’s had, you know, issues since the nest was removed in 2004, but they’re not giving up. Pale Male and his mate Lola are still around. If you come to New York City, go to Central Park and you’ll probably find him flying overhead or catching a pigeon right in front of you!

GELLERMAN: Well Frederic Lilien, thank you very much, I really appreciate it.

LILIEN: Sure, my pleasure.

GELLERMAN: Frederic Lilien’s feature film, “The Ledged of Pale Male” will open at the Angelica Theater in New York City at the end of this month, and then in selected theaters around the country beginning in December.


“The Legend of Pale Male”