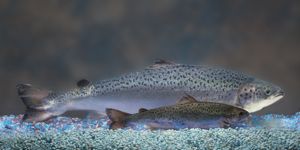 YOUNG: It’s Living on Earth. I’m Jeff Young. The Food and Drug Administration is considering approval of the first genetically modified animal for human consumption. It’s a fish— a farm raised Atlantic salmon carrying a gene and gene marker from two other fish species. The Massachusetts-based company Aquabounty says food from its fish is no different than food from other Atlantic salmon. The FDA’s initial findings seem to agree with the company, which calls the new fish the AquAdvantage Salmon.

Some environmental and fisheries groups have other names for it: They call it “Frankenfish” and “mutant” in a campaign to block FDA approval. These groups say the fish could have profound unintended effects on wild fish and could open the regulatory doors to approval for other genetically altered animals. Ron Stotish is Aquabounty’s president and CEO. He came by our studio to answer those criticisms and to tell us just what his company’s new fish is.

STOTISH: Well this is an Atlantic Salmon first and foremost and, what has been done is a single copy of the growth hormone gene from the Chinook salmon has been inserted into this Atlantic salmon genome. So, it has the normal resident Atlantic salmon growth hormone and it also has this extra copy. That extra copy basically confers the rapid growth phenotype, or the ability to grow more rapidly in that first year of life.

A drawing of an Atlantic Salmon in the wild. (Drawing: Timothy Knepp)

YOUNG: How much faster?

STOTISH: The most easily measured, or the most easily described endpoint is that it will reach market weight in about half the time.

YOUNG: And, it’s more tolerant to cold? Do I understand that correctly?

STOTISH: No, not really. The confusion on that was because the promoter, if you will, the on-off switch for the gene, is from a cold-water fish called the Ocean Pout. That is simply a regulatory element and simply allows the gene to be transcribed into the protein the growth hormone.

YOUNG: Now, why do we need a genetically altered salmon?

STOTISH: Well, the fish was originally developed as a faster growing production tool for the salmon industry. However, as we developed the technology we realized that this technology could be adapted to allow other production systems- it could be land based- that have the potential to reduce transportation costs, reduce the carbon footprint of transportation of large quantities of salmon. And, basically be a sustainable method of production of a safe and readily available seafood product.

YOUNG: Because this is land-based aquaculture that you want this to be applied to, what does that mean for our long-term view of how we’re going to produce our fish?

STOTISH: Well, if you consider the trout industry, for instance, trout are already produced in primarily land-based contained systems. The systems used for AquaAdvantage fish would not be remarkably different from those in principle, perhaps more sophisticated. So, what does it mean? It means if you were able to grow salmon economically in land-based systems, closer to population centers, you could probably create jobs in the Unites States, you could probably grow seafood closer to population centers.

And the net result would be a reduction of transportation costs, a reduction of the carbon footprint, and perhaps most importantly, a safe and sustainable high quality seafood product, closer to the population centers where consumption occurs.

YOUNG: That’s a good argument for land-based aquaculture, but why is that an argument for a genetically modified fish?

STOTISH: Because salmon, particularly in their first year of life, grow very slowly. The benefit of a more rapidly-growing fish which is slightly more efficient, reducing the cycle times, and reducing the time required to maturation, significantly alters those economics, making this a safe and sustainable alternative.

YOUNG: So, as a consumer, would I know if you get approval, that I’m buying a genetically modified animal?

STOTISH: Under the current US labeling policy and laws, the use of a label for a material that is not materially different, or not different in any significant aspect is not necessary. And, in fact, might be false and misleading. So…

YOUNG: How would it be false and misleading?

STOTISH: Well, you’re indicating perhaps a difference that isn’t there. If it is equivalent to the traditional food, there is no material difference. Then, there really isn’t any basis for a label. A label for instance, for mode of production. We don’t label other commodities for different modes of production.

YOUNG: Well, sure we do. We have farm-raised versus wild-caught, for example.

STOTISH: Well, you can, and that’s voluntary labeling, and voluntary labeling is still legal under the law. But, I think what you’re referring to is special labeling, required labeling, indicating that this is, for instance, produced using a transgenic technology. But, the difficulty in required labeling and segregation of the product, we think would probably be an adequate barrier that it would kill the product and never give it a chance to even be tested.

STOTISH: Many of the concerns that are being raised out there today ignore the information that’s already out there in the public domain in terms of the sterility of the fish, the mono-sex female nature of the fish, and the fact that there’s redundant biological, physical containment for these fish. So, any salmon producer who produces the egg, must have their facility inspected by the FDA, prior to being able to receive those eggs, and a part of that inspection will also include the preparation of an environmental assessment.

There are people who are opposed because they see this production paradigm as a possible commercial threat to their product. So, the opposition comes in many forms, much of it in misunderstanding, much of it, also, vehemently opposed to new technology, and particularly, technologies that may be based in genetic modifications.

YOUNG: Because this could be the first, does that put an extra burden on you or on this decision making process? Because, in all likelihood, there are other companies with other genetically modified animals that would likely follow in your footsteps, finsteps, whatever it might be here?

STOTISH: (Laughs.) Of course it does. There’s always a challenge with being a pioneer, there’s a significant burden that goes along with it. It would be stating the obvious that we’ve attracted the attention of everyone who is opposed to this technology for whatever reason, and have become sort of a lightning rod for the technology.

YOUNG: So, what’s your hunch? Is this going to be, pretty soon, a common product?

STOTISH: Well, if you read the reviews and the decisions from the review group, you would hope that this product will be approved and will be entered into commerce.

YOUNG: And, how is it? Have you tried it?

YOUNG: Ron Stotish with Aquabounty, thanks for coming by.

STOTISH: Thank you very much.

YOUNG: Aquabounty is also seeking approval to sell their genetically modified salmon in other countries. There’s a lot more on this at our website L-O-E dot ORG. and share your thoughts at our Facebook page; it’s PRI’s Living on Earth.