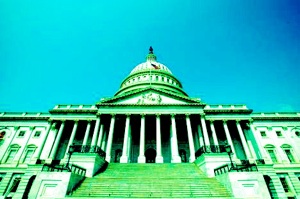 Primary upset victories have brought a wave of conservative candidates dismissive of climate change a step closer to Congress. Some are skeptical of climate change science while others attack the proposed policy solutions. Host Jeff Young talks with Washington correspondent Mitra Taj about what the changing political climate could mean for efforts to curb carbon pollution next legislative session.

YOUNG: Latest reports from Capitol Hill say Oklahoma Republican Senator Tom Coburn has blocked the food safety bill. That essentially kills its chances at least until Congress returns after Election Day. Well, the rocky economy and the rise of the Tea Party are driving mid-term election campaigns. The primaries brought some stunning upsets and a lot of candidates who oppose action on climate change. Living on Earth’s Washington correspondent Mitra Taj joins us to talk about what the elections might mean for federal action to cap greenhouse gases. Hello, Mitra…

YOUNG: So Mitra, what’s the takeaway from the primary season when it comes to climate change?

TAJ: Well, I think we saw candidates very critical of legislative action on climate change win their party’s nomination. We saw that when Republican primary voters in Nevada and Alaska chose Tea Party supported candidates who had expressed doubts about the threat of climate change. And we saw it recently in Delaware in the Republican race for Senate when Christine O’Donnell beat nine-term Congressman Mike Castle.

YOUNG: Mike Castle, among just eight Republicans in the House to vote for the cap and trade climate bill there…How did that play out in the campaign for Senate in Delaware?

TAJ: So O’Donnell really seized his ‘yes’ vote as an opportunity. She repeatedly attacked cap and trade and Castle’s support of it. And made very clear how she would have voted.

O’DONNELL: I believe cap and trade is one of the most destructive pieces of legislation in American history. That will push us much more toward socialism than ever before, if not, be the final nail in the coffin that makes America a socialist society.

TAJ: Now, the Democrat she faces in the general election, Chris Koons, says he’s in favor of a cap and trade solution to climate change. Which is interesting because, you know, cap and trade really emerged as a Republican policy tool under the first Bush administration-- a sort of market-based alternative to traditional environmental regulation. But if you look at the crop of Republicans running for office this year, it’s hard to find any who’ve expressed support for it.

YOUNG: Is it just cap and trade that they’re against?

TAJ: Actually several of these Republican candidates have gone a step further and are actually questioning the science of climate change, not just the policy proposals to solve it.

YOUNG: So, I noticed Christine O’Donnell and a lot of the Republican candidates have signed on to something that’s called the ‘no climate tax pledge.’ What’s that all about?

TAJ: That’s a pledge to taxpayers that says basically ‘I’ll oppose any climate change legislation that increases government revenues.’ And, so far, some six hundred politicians have signed onto the pledge. And the group behind it, Americans for Prosperity, is funded by David and Charles Koch, two brothers who run a big petrochemical conglomerate called Koch Industries. And, they’ve been very active in supporting the Tea Party movement and also in funding opposition to environmental regulations. The green group Greenpeace reports that Koch has spent fifty million dollars to help kill regulations on green house gasses. And, Koch industry’s response is that it’s just promoting economic and intellectual freedom and not opposing any particular piece of legislation.

YOUNG: So, what are we seeing happening on the Democrat’s side when it comes to climate change so far in the elections?

TAJ: Many Democrats who face serious challenges from Republicans are pretty cautious about voicing public support for climate action, especially those from states with strong ties to fossil fuels. Just recent a few showed up at a coal rally on Capitol Hill organized by a pro-industry group that flew in coal supporters from Appalachia.

[RALLY NOISES: Be proud to be a coal miner. Stand up for coal mining. Whose jobs? Our jobs! Whose coal? Our coal! Whose children…?]

TAJ: And at the rally a number of prominent lawmakers climbed on stage to profess their love for coal. Including West Virginia governor Joe Mansion, the Democrat running against John Lacey for the Senate seat left open when Robert Bird passed away. And, Masion’s trying really hard to out-coal his opponent, as you can hear here:

MANSION: President Obama is wrong on cap and trade. Lisa Jackson is wrong with the EPA attacking the energy that fuels America.

YOUNG: Well, it sounds like governor Mansion there is going after EPA for using their authority under the Clean Air Act to try to regulate greenhouse gasses.

TAJ: Ever since climate legislation got stuck in the Senate, the EPA’s authority to act has been the central climate change battle. Legislators from both sides of the isle have been trying to keep the agency from writing new rules that would curb emission from power plants and refineries. So, this could be really what’s at stake in the new Congress.

TAJ: It’s still really unclear. They’ve been really hard to pin down on a lot of issues, including the environment. I think we tend to think that they’re not too interested in environmental protection, but a poll from earlier this summer found that actually more Tea Party supporters favor comprehensive climate change legislation than oppose it. So they’re far from being a monolith ideologically.

YOUNG: And the big question, of course, what does this new political climate mean for action on climate change?

TAJ: Well, I guess we’ll have to see what happens in the general elections. A lot of analysts think that the really conservative candidates like Christine O’Donnell could end up delivering even more votes to Democrats, so that in turn, could mean more votes for addressing climate change. But, I think, given the kind of rhetoric that survived the primaries, it might be really hard for politicians, especially Republicans, to conclude that climate action is the popular thing to do right now.