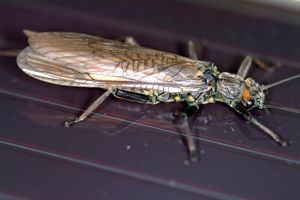 A stonefly rests on a solar panel, confusing it with it's usual resting spot- water. (Photo: Gyorgy Kriska)

Researchers have observed some aquatic insects laying their eggs on solar panels instead of in water. As Living on Earth’s Meghan Miner reports, this could lead to a decrease in insect populations where solar panels are prevalent.

YOUNG: It’s Living on Earth, I’m Jeff Young. Just ahead – enlisting a tiny insect to fight a wooly bully –but first - this note on emerging science from Meghan Miner.

MINER: Imagine stepping into a pristine swimming pool. But instead of the cool, refreshing dip you were expecting, your feet rest on a sheet of glass. Researchers have found that some aquatic insects are having a difficult time finding their swimming pools and are landing on solar panels instead!

Scientists at Michigan State University and in Hungary have discovered that mayflies, stoneflies and other aquatic insects become mesmerized by solar panels- buzzing around and even laying their eggs on them.

A mayfly rests on a solar panel. Increasingly, mayflies and other aquatic insects are attracted to shiny objects like solar panels because of how they polarize light. (Photo: Gyorgy Kriska)

The bugs use polarized light to find water- but there are some shiny objects that can actually polarize light better than water. Solar panels polarize 100% of the light that hits them, while water can only polarize 60% of light. Solar panels may be enough of a distraction to decrease insect populations in some areas. And, because water insects like mayflies, are part of the aquatic food chain, a reduction in their numbers could spell problems for entire ecosystems in the future.

A stonefly rests on a solar panel, confusing it with it's usual resting spot- water. (Photo: Gyorgy Kriska)

But the researchers have found a way to combat this bug bewilderment. They’ve added strips of white tape to break up the solar panel into small squares: the smaller areas look like tiny bodies of water, and become less appealing places for bugs to land and settle down. So, the next time you find yourself lounging by the pool, be thankful you didn’t have to use polarization to find it! That’s this week’s note on Emerging Science. I’m Meghan Miner.