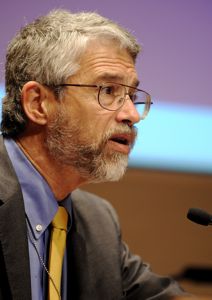 As the Director of the Office of Science and Technology Policy John Holdren is the scientist President Obama goes to when he needs answers and advice. Living on Earth’s Steve Curwood spoke with Dr. Holdren about the Gulf oil disaster and the effects in might have on U.S. climate policy.

YOUNG: LOE’s Mitra Taj reporting from Capitol Hill. Well, as we heard from Mitra the White House is the crucial player in energy policy. For the President’s Science Advisor, John Holdren, this is a moment to reaffirm the need to shift from polluting fossil fuels toward a new energy economy. Holdren is a former president of the American Association for the Advancement of Science and a longtime advocate of cutting greenhouse gases. Living on Earth’s Steve Curwood recently sat down with Holdren, who told him it’s time to heed the lesson from the Gulf disaster.

HOLDREN: It is a teachable moment, it’s always a shame when such moments have to be so painful and so damaging. The president himself has said that the oil spill in the Gulf has to be a wake-up call about the need to transition away from our current heavy dependence on oil to an array of cleaner energy sources, less dangerous energy sources, energy sources that are politically less problematic than oil is.

Where we get so much of our oil from parts of the world that are unstable, where some of the governments are not our friends, and we intend to make that transition in this administration. So this is a teachable moment, I just wish, and the president wishes, that it was not such a damaging one.

CURWOOD: You’ve often said that climate is the envelope for which so many environmental, economic, social, political things must fit for things to work. President Obama came into office saying that we would see comprehensive legislation on climate—hasn’t happened yet. What’s the agenda?

HOLDREN: Well the president made clear in his speech just the other day that he continues to place a high priority on getting legislation that addresses our energy challenges and our climate change challenges in an integrated way. He said again very plainly that any legislation that does not succeed in putting a price on emissions of greenhouse gasses is inadequate, that we absolutely have to get that done in order to have the incentives in place to stimulate American innovation, to develop the clean energy sources that we’re going to need both for our economy and for reducing the dangers from global climate change.

We don’t have that legislation yet for a number of reasons. I don’t think anybody expected that when this administration came into office that the economic crisis that we faced would be as deep or as long as it proved to be. People didn’t expect Haiti, with that devastating earthquake that took so much of our attention and effort to work with the people from Haiti to recover from that. We didn’t expect the oil leak in the Gulf. But we are getting to energy and climate legislation. And there is no lack of commitment on the part of the president and those who work with him to get that done. 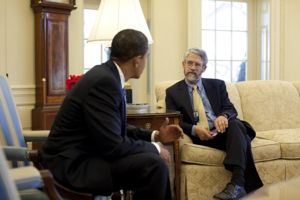 CURWOOD: You know, famously, people are saying the President doesn’t have 60 votes to get a climate bill through Congress this year. What does the President say?

HOLDREN: The President thinks its important and his advisers, including me, think it’s important first of all to keep energy and climate change together in the legislation, as it goes through Congress, not to say, “Well we’ll do energy first and we’ll do climate change later,” because these are intimately connected. And there are important trade-offs that the legislation needs to reflect. The President remains committed to keeping them together, and he remains committed to getting the votes we will need to get that legislation through the Congress in a form that will be worth the President’s signing. We think that enough members of Congress will recognize the need to do this that we’ll get the votes.

CURWOOD: Oil spill helping this venture, do you think?

HOLDREN: The oil spill makes it more difficult to gain votes from folks who would consider expanding off-shore drilling sort of a trade. They say, “Well if you let us expand off-shore drilling maybe we’ll vote for climate legislation.”

It’s obviously difficult at this point to pursue that line of argument. We’re going to have a commission that’s going to understand and communicate to the President and the public what went wrong in this particular case. On the basis of that, we’ll be in a position to decide whether we can guarantee that such a thing will not happen again, by changing the enforcement, by changing the regulations, by changing the technology, but that’s going to take some time.

And so it’s not clear that the sort of bargain of, yes, we need to expand the domestic oil supply, but we also need climate legislation. It’s not clear what the force of that bargain will be. On the other hand, as the President said just the other day, the oil spill is a wake-up call about the need to transform our energy system.

So we can do some things that are win-wins, that simultaneously help us with several dimensions of the energy challenges we face. And thinking about it in that particular way, it may be that the oil spill, disastrous as it has been and continues to be, will nonetheless not be an impediment to getting the comprehensive energy and climate legislation that we need.

CURWOOD: John Holdren is President Obama’s science advisor. Thank you so much.

HOLDREN: My pleasure. Thank you Steve.