Trawling for a Fishing Solution 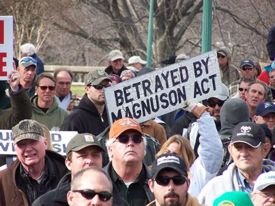 Fishermen object to the Maguson Act that limits catch to rebuild stocks. (Courtesy of United We Fish)

Thousands of fishermen rally at the nation’s capitol demanding changes in fishery law. They say tight catch limits could sink their businesses even as fish stocks are rebounding. But scientists warn against a return to policy that brought about the collapse of many fish populations. Host Jeff Young explores ways to chart the right course for our fragile fisheries.

YOUNG: From the Jennifer and Ted Stanley Studios in Somerville, Massachusetts - this is Living on Earth. I’m Jeff Young. Thousands of fishermen from the Atlantic and Gulf Coasts left their boats for a day Wednesday to travel to Washington. They’re hoping to catch a break from the law’s limits on over fishing. At a Capitol lawn rally called United We Fish, New York Democratic Senator Chuck Schumer said the law that’s helping to bring fish stocks back from collapse should change.

[CHEERS AND APPLAUSE FROM CROWD]

YOUNG: Schumer wants a change to the landmark Magnuson-Stevens Act, which uses science to set limits on what types and what numbers of fish can be caught. He thinks it should take economics into account and delay some deadlines for rebuilding fisheries. It’s the latest round in an increasingly bitter dispute over how to bring fisheries back.

YOUNG: Gloucester, Massachusetts, like many fishing communities, has weathered many changes in the industry. In the 70s giant foreign-owned vessels depleted fisheries from just beyond U.S. waters. Then, government loans encouraged a new wave of local boat owners in the 80s. That was followed by over fishing, collapse of many important stocks, and a painful contraction of the fleet. Key parts of the Magnuson Stevens Act aimed at ending over fishing kick in this year. Gloucester Mayor Carolyn Kirk worries that could mean tighter catch limits and even fewer boats in an already stormy economy.

KIRK: Gloucester is the oldest seaport in America we’ve been fishing for over 400 years and I think that the future of Gloucester as a seaport is very much in jeopardy. 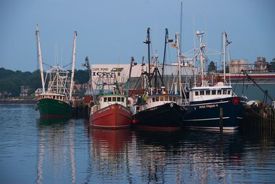 JACKSON: Fishermen have been told time and time again that they will be rewarded, they will be given days at sea, they will have more fish to fish on. We are supposed to be fishing on 170 thousand metric tons of fish along the East coast every year. Last year they gave us 43 thousand.

YOUNG: Atop Jackson’s list of complaints is the government’s shifting rulings on whether a fish stock has recovered or is still over fished. She says just as a fish stock appears to be recovered, the government’s numbers change. David Marciano agrees. He’s a 30-year Gloucester fisherman who worries he might not be in business much longer.

MARCIANO: We’ve been rebuilding stocks. We’re at the ten-yard line and they’re moving us to another stadium. Know what I mean? It’s completely arbitrary and unfair. Never mind moving the goalposts, they’re taking it right to another stadium and leaving us here.

YOUNG: But I guess if I were looking at this from the conservationist’s perspective, I might say we have to be vigilant, if we let up now we’re going to fall back into patterns that got us into trouble with declining stocks in the first place.

MARCIANO: We’re not saying we’re not about preserving stocks; I have a son who loves to come on the boat. I would love to see more fish in the ocean for him than there was for me. And I believe we’ve achieved that. That’s why I think it’s a shame to be forced out of business by agenda-driven politics.

YOUNG: Marciano says he knows some fish stocks are still struggling but others are more numerous than he’s ever seen. Why should one weak stock prevent his fishing the other? Steve Murawski has heard a lot of these complaints. He directs scientific programs for fisheries at NOAA the National Oceanic and Atmospheric Administration, which sets fishing regulations. Murawski’s sympathetic to the fishermen’s frustrations. But says those changes in targets for rebuilding fish stocks were necessary as science improved.

MURAWSKI: It’s a very dynamic thing because our knowledge of the oceans is dynamic. So what we have is an entire fishery in transition where the most productive ones, where we’ve been able to control over fishing, are responding well. But the law requires that we rebuild the complex. And that includes being sensitive to the stocks that grow slower and are perhaps even more vulnerable to over fishing.

YOUNG: That explains part of what fishermen like David Marciano see out on the water. This time of year Marciano’s fishing haddock and cod. Murawski says the fast growing haddock of George’s Bank are doing great – the highest numbers ever. But cod? Still not so good. And remember, Murawski says, the law calls for restoring all stocks, not just a few. 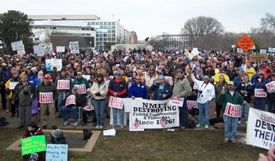 (Courtesy of United We Fish)

YOUNG: The rallying fishermen and politicians like Senator Schumer say the best fix for that is to change the law to add flexibility. But conservation groups say that’s a dangerous course. Pew Environment Group fishery policy director Lee Crockett says Schumer’s proposal would put economics ahead of conservation.

CROCKETT: And we feel that is a shortsighted strategy. It was the way we used to do things and we had stock collapses in New England and the Gulf of Mexico so we know what’s going to happen if we allow that and we just don’t want to go back to that failed model.

YOUNG: Crockett says a better way is to change fishing to be more fish specific. A NOAA program called cooperative research finds ways to do that – it might be different bait for hook lines, or better timing of fishing to target plentiful stocks and not the scarce ones. That program, however, could be gutted. The president’s budget would scale back its funding. There’s much more on fisheries at our website l-o-e dot org.


The United We Fish rally organizers