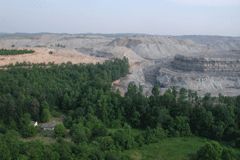 Mountain top removal mining strips all of the vegetation and topsoil off the top of a mountain in order to access the coal beneath it. (Photo: Vivian Stockman)

The Environmental Protection Agency recently issued a new permit for a mountaintop removal coal mine in West Virginia. The mine will strip all of the vegetation and top soil from the mountain and fill the valley below with rubble and unwanted debris. Just three days after the permit was issued, the journal Science published a paper calling for a moratorium on mountaintop removal mining. Host Jeff Young talks with Margaret Palmer, lead author of the Science article, about why she and a dozen other scientists are willing to step into a political minefield.

YOUNG: After putting dozens of mountaintop removal mining projects on hold, the U.S. Environmental Protection Agency recently approved a contentious permit for one of the mines. That means the Patriot Mining Company could soon begin to strip a mountain in Lincoln County, West Virginia, of its trees and soil. The seam of coal is then exposed with explosives.

[SOUND OF BLASTING AND FALLING DEBRIS]

YOUNG: The tons of rock and earth that once formed the top of the mountain will then be dumped into adjacent valleys. Patriot’s Hobet Mine – scaled back somewhat by EPA – could bury three miles of streams. Just days after EPA approved that mine, the journal Science published a paper on mountaintop removal that’s nothing short of a bombshell itself. University of Maryland biologist Margaret Palmer assembled a team of a dozen scientists with expertise in each area the mining harms – forests and flooding to water chemistry and public health. Dr. Palmer says impacts of the mining are pervasive and irreversible and attempts to regulate it are inadequate. 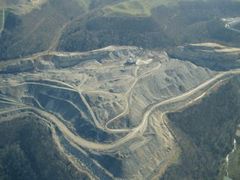 PALMER: A lot of streams are completely buried when they push the excess rock and material into adjacent valleys, are called “hollers” in that part of the country, and those streams are lost forever, they’re never uncovered and everything in them is killed. But in addition to that because the whole mountaintop has been flattened and all the trees removed you have dramatic changes in the hydrology – or the water flow – into the streams that remain below the mine sites.

You get a lot more flooding and the frequency and the magnitude of those floods go up. Then additionally because the rock material that’s exposed to air and also rain after it’s been brought to the surface to reach the coal seams, it tends to leach a lot of chemicals that are very dangerous at the levels that the can occur in sites below mines. So, for example, things like manganese, iron, sulfate, and of particular concern, selenium.

YOUNG: Let me ask you though, why is selenium of particular concern?

PALMER: Well, selenium is a trace element that in small quantities is not dangerous, but when its elevated it causes serious problems. For example, fish exposed to levels of selenium that have been found in some streams and rivers below mine sites have seriously deformed spines, they have – some of them have two eyes on one side of the head. In general, their reproduction is reduced.

And higher levels of selenium have been found in some drinking water wells that people use in the region. So this is a major concern, and particularly because what our study really clearly showed was that as the amount of mining goes up in a watershed these various chemicals also go up linearly. The more and more mining that goes on, the more serious the water quality problems become.

YOUNG: So, what was your conclusion after looking at all these different impacts, having an expert in each of those individual impacts weigh in? What was the conclusion?

PALMER: Well, it was very clear and it was unanimous among all the authors that the impacts are so significant and they’re irreversible. Once the mountain’s gone, you know, it’s forever before it will come back, and the soils themselves won’t be back to previous levels for probably ten thousand years. There are streams lost, water quality impacts – our conclusion was that there really needs to be a halt on permits for mountaintop mining and it needs to happen quickly.

YOUNG: This is scientists stepping somewhat beyond the realm of strictly science into policy, isn’t it?

PALMER: Well, that’s true, but in many ways this is very much akin to the relationship between smoking and cancer – it is so obvious and so clear just like the Surgeon General warns people about smoking, we’re basically saying, hey, this needs to stop.

PALMER: Oh no, they certainly do not and it is our hope that this synthesis we’ve put together – and much of the work was done by EPA’s very own scientists, some of the original work we brought in – we would hope that this would lead them to recognize that they need to quit giving out these permits and we were disheartened to hear about the Hobet permit.

Mountain top removal mining strips all of the vegetation and topsoil off the top of a mountain in order to access the coal beneath it. (Photo: Vivian Stockman)

YOUNG: If they continue to approve mountaintop-removal permits under the current system, however, what does that say about how well policy is matching science in this case?

PALMER: Well, if it continues the way it has been I would say that policy is not matching the science.

YOUNG: Dr. Margaret Palmer at the University of Maryland Center for Environmental Science, thanks for your time.

YOUNG: An EPA statement says the agency “look(s) forward to reviewing the details of this latest study and considering carefully its recommendations.” The EPA is still reviewing several mountaintop-removal permits, including one that would be the largest in West Virginia history. I spoke with the secretary of West Virginia’s Department of Environmental Protection, Randy Huffman.

HUFFMAN: Science is what it is. But the debate is going to take place over what is the acceptable amount of impact that society is willing to tolerate for the quality of life and standard of living. I don’t think that’s something that these other studies have taken into consideration. I don’t have the luxury of just looking at one side of it and drawing a line in the sand and saying I don’t have to consider those other things, because I do.

YOUNG: You can hear more of that interview and our extensive coverage of mountaintop removal at our website LOE dot org.

[MUSIC: Bill Frisell “Variation On A Theme (Tales from the Farside) from Ghost Town (Nonesuch Records 2000)]


Listen to a longer version of LOE's interview with Randy Huffman.

LOE Story: Living in the Shadow of Coal