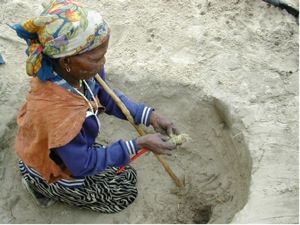 A woman at a sipwell. Sipwells are small bodies of water trapped underground. They’re difficult to detect, and knowledge of their secret locations is highly prized. (Photo: James Workman)

The government of Botswana has stopped all water deliveries to the Kalahari Desert in an effort to drive indigenous Bushmen off their land. In the book “Heart of Dryness,” author James Workman recounts how the Bushmen conserve, share and trade water to persevere against an arid landscape. As he tells host Steve Curwood, lessons from the Bushmen can help us survive future water shortages.

The Bushmen of the Kalahari in Africa have lived for tens of thousands of years – finding water, and scratching out an existence in the harsh desert landscape.

WORKMAN: It’s very drab, it’s very monotonous, it’s the closest I can imagine to a moonscape.

CURWOOD: That’s James Workman, an international water specialist from California who traveled in the Kalahari.

His new book is called “Heart of Dryness, How the last Bushmen can help us endure the coming age of permanent drought.” Mr. Workman says we should pay heed to the Bushmen because inevitable climate change will lead to growing global desertification, including dry areas like America’s southwest. 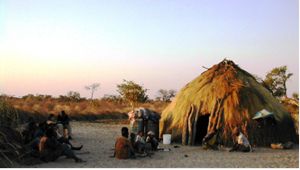 But James Workman says that the Bushmen nearly lost the skills they developed to survive in their hostile land when the Botswana Government implemented a series of forced resettlements.

WORKMAN: They moved them out to these reserves in Rakops and it wasn’t that there was less water, it was a monopoly of water. It was the government saying here’s a pipe and you get all the water you want. On the surface like ah, who can complain about that.

But it changed their life because there was nothing for them to organize their existence around. Before they’d been hunting and gathering and trading and exchanging and doing so on their own terms and time table. And then you hook ‘em up to a tap and that was it.

In some cases that water wasn’t as good a quality. When you concentrate people and animals around water you create all kinds of unintended negative effects of sewage in the water supply, of malaria because you’ve got standing water. 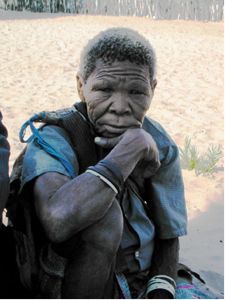 CURWOOD: And, of course, once you have people dependent on a pipe for water, things happen when you shut off that pipe and that’s indeed what the government did. What happened to the Bushmen who chose to stay despite the lack of water?

WORKMAN: They fell back on the old ways as they call them. So the elders became in many ways leaders of saying “okay. Here’s how we’re gonna cope. We know the secret places where water is hidden. We know when to capture it. We know how to use it.”

When I first approached them, I thought I was coming to rescue the Bushmen, and it turned out quite the opposite. Especially after my vehicle broke down in the middle of the Kalahari where I realized I have nothing to offer these guys. They’ve been here, they know what to do. On the other hand, if I can ever get out of here, which eventually I did with some help, I’m gonna see what they can do to help us.

CURWOOD: The Bushmen can survive in surprisingly arid conditions. What lifestyle choices make that possible and what might we learn from them as a society?

WORKMAN: You can’t increase supply. So what you have to do is somehow find ways to reduce demand. And they’re masters at that. They sequester water, they scoop it off. As soon as there’s a rainfall into a pan or into a tree and then they store it in a jug, a canister, an oil drum, ostrich shells, to prevent evaporation, whereas we do the exact opposite. 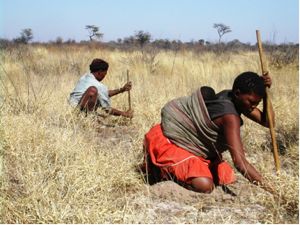 Digging for tubers and roots. The Bushmen can eat about 100 different plants from the Kalahari Desert. (Photo: James Workman)

You know we store these water in giant dams which evaporate rapidly. And they also drink and eat local. They don’t lose things through leaks and pollution and spilling over long distance whereas we ship water from the Colorado River or from two states away. And then they reuse water as often as possible. They saw me sort of as like going to throw out some dish water and they were like “what are you thinking?”

CURWOOD: In your view, what’s the craziest thing that people here in the affluent west do with water?

WORKMAN: We grow rice in the desert. We store water in these five foot deep reservoirs. And the hardest things for us on a personal level to recognize is the idiocy of flush toilets. That uses not just a lot of water that could otherwise be used and saved for the environment, it pollutes it, it spreads disease and it requires a huge amount of energy. Here in California a fifth of the energy in the state goes towards treating and lifting and moving and warming water.

CURWOOD: Now somebody listening to us would say “okay, fine. You want us to live like the Bushmen of the Kalahari.” How do you deal with this in a modern, urban society?

WORKMAN: Well what we can do is adopt their approach to water and give it the kind of value that they do. There are incentives and there’s technology already available. Germany and Norway it’s almost become a fad to have what they call Ecosan – these, you know, composting toilets, which then turn our human waste into and asset. There are ways to minimize the impact that we leave and that’s the lesson from the Bushmen.

CURWOOD: It would be helpful if you could describe the Bushmen’s practices of trading water and ownership.

WORKMAN: The main thing is there’s no monopoly on water. I sort of came there thinking “oh, the Bushmen are primitive Marxists” because that was sort of the romantic idea I had. And it’s quite the opposite. They recognize the strength of each other, or who can gather, who can hunt, who had rights to the sip well, to that pan, to this, you know, foraging ground. They know and keep track of mentally who owes whom what. And that matters in times of scarcity because it relieves the pressure of saying “okay, you’re not pulling your weight” or “you’re wasting something.” 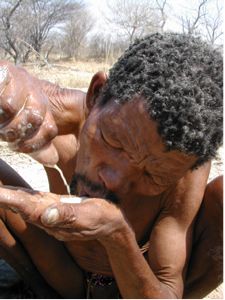 Squeezing water from a tuber. About 80% of the Bushmen's water comes from the food that they eat. (Photo: James Workman)

So it’s self regulating in a way that we couldn’t begin to recognize with no police force, no politicians saying “okay, you get this much water. I’m deciding where this water goes and so forth.” And so they own shares. And by doing so, they take good care of it. They make it last as long as possible.

CURWOOD: So, how feasible is it to apply the Bushmen’s survival skills to developed countries?

And that’s the kind of thing I think we can adopt and which I’m trying to pioneer where you and somebody across the city from you – you’re all in the same water supply – you use, you know, fifty gallons, he uses 500 gallons. And if everybody gets the same amount of water, you can sell what you don’t use or you can save it to that stranger. It’s like an Ebay for the environment.

CURWOOD: One aspect of the case of the Bushmen that came up was a question of whether water is a basic human right.

CURWOOD: Now, it seems to me that it’s impossible to live without water. So, what is the argument to say that water is not a human right?

WORKMAN: I’m siding with you exactly on that, but the counter point is like “wait – if water is a human right, then if some government fails to provide it through incompetence, do they get hauled up in front of the Hag? 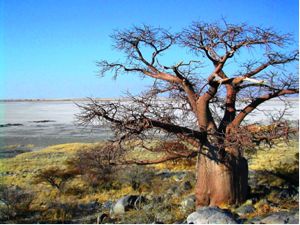 A baobab tree in the Kalahari Desert. (Photo: James Workman)

Are they human rights violators whether it’s intentional or unintentional? And if it’s a human right, does that mean I get unlimited water wherever I live, so I can move to the Mohave Desert and says “I’ve got a human right to water! You must bring that water to me.”

My answer is that it is a human right, but it need not be called that. You can quantify a certain amount for every single person, rich or poor, and if they use that amount, then it’s free. If they use less than that amount, which they own, then they can sell or save credits that they’ve earned. Water is an economic good and it’s a human right. And it’s both together and we can use it as such.

CURWOOD: James Workman’s new book is called “Heart of Dryness, How the last Bushmen can help us endure the coming age of permanent drought”. Thank you so much Jamie.

WORKMAN: Steve, thanks very much.

Learn more about Survival International, a group that helped fund the Bushmen's court case against the Botswana government.

Read a message from the First People of the Kalahari.

For another Living on Earth story on the Bushmen, click here.