The Environmental Protection Agency has been slow to begin screening chemicals that could disturb the body's hormonal system. Thirteen years have passed without the agency testing a single chemical for the mandated Endocrine Disruptor Screening Program, and some worry that common exposures to substances like bisphenol-A could be bad for public health. Former EPA scientist Tracey Woodruff talks with host Steve Curwood about what the EPA is and isn't doing to protect the public from harmful chemicals.

CURWOOD: By the way, another chemical that’s risky at low doses is the herbicide atrazine, now banned in the European Union, but widely used here in the US. The Natural Resources Defense Council recently found troubling amounts of atrazine in three quarters of the streams in farming regions. To date the EPA has failed to act on atrazine, as well as the low-dose screening program, and the agency declined to talk with us for this week's show. So we called Dr. Tracey Woodruff, who worked as an EPA scientist for 13 years.

She now directs the program on reproductive health and the environment at the University of California at San Francisco.

WOODRUFF: I think EPA needs to do more to look at the question of endocrine disrupting chemicals. Clearly the effort they’ve made to date on implementing endocrine disruptors screening program could move a little faster. There has not been a whole lot of visible movement in that program since it was passed in 1996. So that was during the Clinton administration. 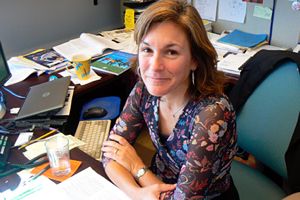 Tracey Woodruff (Courtesy of the University of California, San Francisco)

Now, there’s a couple things that go on with that program. One is they have to decide what chemicals to test. Then they have to development methods for testing those chemicals. But clearly that program has moved at a very slow pace particularly when we look at the amount of scientific information that is continuing to emerge about a lot of these endocrine disrupting chemicals and why we might be concerned about their low level exposures.

CURWOOD: Why do you think it’s been so slow to move?

WOODRUFF: Well I think – I think there’s many different things that come into play on why things can be slow particularly at a regulatory agency. One issue is gonna be the science and how do we vet through the science.

Certainly another important issue is who are the people who are concerned about this and what are the issues that they care about and how much influence to they have on the process moves. And clearly the testing of endocrine disrupting chemicals is a focal point for groups – both environmental groups, but also the regulated community who’s going to be concerned about how their chemicals are labeled.

CURWOOD: Some people remark that industry has really been trying to block or halt this process. How fair a criticism is that?

WOODRUFF: Industry clearly cares about what’s gonna happen with this program. Industry clearly has been talking to EPA about what they want to see. And EPA is more or less responsive to that depending on their own political considerations. So, one of the things that’s difficult about some of these programs that are set up something like this but don’t have enforceable deadlines is that things can drag out for a long time because EPA can spend a lot of time talking to lots of people and not necessarily moving forward. And if it’s not a high priority for the agency to move it forward, then it will get stuck.

CURWOOD: So, I know you’re in academia these days, but let’s say the phone rings and it’s President Obama. And he calls you up and he says “well how should the EPA now deal with endocrine disruptors?” What would you tell him?

WOODRUFF: [laughs] If President Obama called me on the phone that would be very exciting. My first priority would be to change the requirements so that we had to require information about chemicals that were gonna remain on the market so we knew whether they were gonna be a problem or not for public health.

CURWOOD: So test everything?

WOODRUFF: Well, I think everything should have some type of basic information set to know whether they’re a potential health problem.

CURWOOD: And how important would it be to move something like atrazine to the head of the queue?

WOODRUFF: Well I think atrazine actually has a lot of data looking at the exposures to atrazine and what the increased risks might be. So I’m not sure they need to put that through the endocrine disruptor screening program. I think EPA could take the data and science they have at hand and move right to the decision making process. 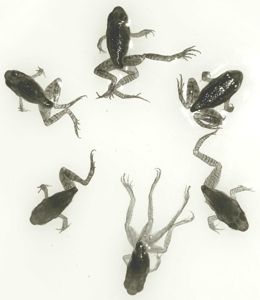 Scientists have found that levels of atrazine low enough to be considered safe for drinking by the EPA have caused deformities in frogs, including missing limbs, limb duplications, and sex changes. (Photo: Joseph Kiesecker, Penn State)

CURWOOD: Now, as I understand it, if one has a new chemical that’s gonna come on the market it goes through testing process at EPA. But if it’s been around the screening is not required at all. I mean you could put something in a cosmetic that – if it is an existing chemical – without testing to see what health effects it might have. Do I have that right? And if I do, do you think things should be changed?

WOODRUFF: Yes, you have that right. Chemicals that have been on the market since the passage of the Toxic Substance Control Act do not require any testing unless EPA provides as large amount of data to prove that we should test something, which, of course, is very difficult to do. New chemicals that come onto the market do have to have a little bit of testing, but its not the complete set of testing that we would want to know for every chemical. And this seems a little bit odd that we have chemicals that are on the market which we have no idea whether they – at the levels that people are exposed – are safe of not.

CURWOOD: What substances that we’re exposed to regularly in low levels are you most concerned about?

WOODRUFF: It’s a little bit difficult to sort through because as you probably know, if you think about high production chemicals alone which is produced or imported in more than a million pounds – there’s almost 3,000. Some of the chemicals I’m concerned about are things that I think we haven’t been paying very much attention to. I mean, a lot of people are familiar with the bisphenol A and phthalates. I’m also very concerned about ones that are what we would consider emerging or that we haven’t been looking at very much.

WOODRUFF: Triclosan, though to disrupt thyroid hormones, the cyclohexanes, which are a family of chemicals which are ubiquitous in consumer products and have been talked about in California as a substitute in dry cleaning for perchloroethylene. There’s some suspicion that it can disrupt uterine function. And then the nonylphenols, octylphenols which are found ubiquitously in the water supply and also thought to be an endocrine disrupting chemical.

CURWOOD: Well wait a second triclosan is in the deodorant soap that gets used in my household.

CURWOOD: Nonylphenols are in detergents. So I should quit washing I guess.

WOODRUFF: [laughs] No you should not quit washing. But you can use products to wash your hands and wash your clothes that do not have necessarily all these chemicals. It’s very interesting about the soap and the triclosan and it’s in all these sort of antibacterial soaps, but there’s not a lot of evidence that we need to have quite the focus on these antibacterial soaps that we’re led to believe. I think if you can just wash your hands with some very plain soap, that works just as well.

CURWOOD: Tracey Woodruff is a former EPA scientist and she’s an associate professor at the University of California at San Francisco. Thank you so much, Dr. Woodruff.


For more on Tracey Woodruff and her work, click here.