Cheyenne May Yield to Coal 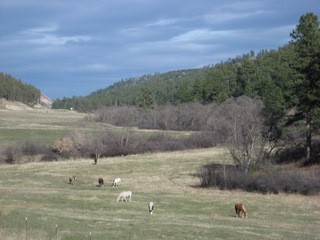 The Northern Cheyenne Indian Reservation in eastern Montana lies on a blanket of rich coal. But tribal members have never wanted to mine it, even as mining surrounded them. As Daniel Kraker of Arizona Public Radio reports, that may be changing.

In the southeast corner of Montana, on the isolated northern Cheyenne reservation, live some of the most determined and successful environmentalists you’ve never heard of.

Over the past four decades the Cheyenne fought powerful energy interests and the federal government to keep the tribe’s vast coal deposits from being mined. They’ve adopted some of the country’s strictest air and water quality standards. But they’ve had less success dealing with chronic unemployment and substance abuse.

Now a new tribal president is pushing coal as a way out of poverty, as Daniel Kraker reports. 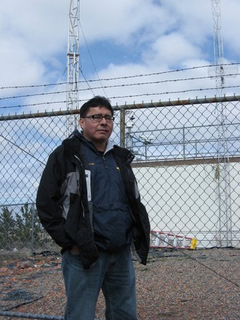 Jay Littlewolf on top of Badger Peak outside one of the tribe's air-quality monitoring stations. (Photo: Dan Kraker)

At the summit is one of the more visible signs of his people’s long fight to preserve their environment.

KRAKER: Littlewolf opens the door to one of the tribe’s three air quality monitoring stations.

LITTLEWOLF: Basically all three sites monitor for SO2, NOx, NO, NO2…

KRAKER: Inside the tiny trailer air analyzers hum as they measure tiny amounts of the pollutants.

KRAKER: Outside, Littlewolf points north, where 16 miles away four smokestacks puff wisps of smoke into the bright blue sky.

LITTLEWOLF: But with that plume from Colstrip, no matter what time of the year you can see it, usually in the morning you can see a brown haze in the sky there, and that’s nitrogen dioxide.

KRAKER: Colstrip is Montana’s largest coal plant. It cranks out over two thousand megawatts of electricity. When the plant’s owners wanted to expand in the 1970s, the Northern Cheyenne fought back. They became the first government to voluntarily adopt the strictest air quality standard—a class I airshed, the same as national parks.

The tribe used its new leverage to force the coal plant’s owners to install state-of-the-art pollution scrubbers, and to pay for the tribe’s air monitors.

KRAKER: Back inside Littlewolf turns on a computer to show me the data he’s collected.

LITTLEWOLF: We still get low numbers, but we measure and report in parts per billion. So we’re still being impacted because even class I has a very small increment. It doesn’t take much to impact us. 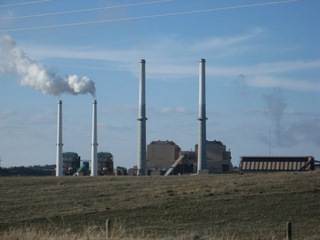 The power plant in Colstrip, just a dozen miles north of the reservation boundary. it's the largest coal-fired power plant in Montana. (Photo: Dan Kraker)

KRAKER: Over the years the tribe has used its stringent air quality standards to stop proposed mines and power plants, beyond the reservation too. But now this reservation is an island. Five major strip mines surround it. There’s a new power plant 60 miles west, hundreds of natural gas wells to the south, and two proposed plants to convert coal to diesel. Many people here say it’s time for the Northern Cheyenne to also join in the coal boom, before it’s too late.

SPANG: My name is Leroy Spang. I was recently elected president of the Northern Cheyenne tribe.

KRAKER: Spang worked for three decades as a miner in Colstrip before retiring three years ago. Coal is what he knows, and it’s what he campaigned on.

SPANG: My platform was more or less coal. I guess there was a lot of people backing me for that coal, that’s how I got in. 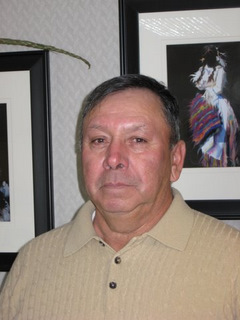 KRAKER: Two years ago, after decades of fierce opposition, tribal members finally said “yes” to developing their coal resources in a special referendum. There’s an amazing amount of coal here; billions of tons under practically every inch of the reservation, part of a rich belt that stretches into Wyoming. Eugene Limpy, a former tribal vice president and Spang supporter, says there’s enough to support generations of his people.

LIMPY: And the revenue that would come from that coal will address our needs for money for education, housing for all our people, and a retirement fund when people reach elderly age.

KRAKER: Limpy seems unconcerned that elsewhere in the country, some are turning away from coal because of its carbon emissions.

LIMPY: It might seem way out far but they’re going to find a technique to turn that coal into some kind of energy, maybe atomic fuel. Technology is always coming up with something to use the resources underneath.

KRAKER: And Limpy says those resources could provide jobs, on a reservation where the unemployment rate is about 70 percent, and the median income only half the national average. Limpy has a good job working for the tribal government, but he says the poverty affects everyone.

LIMPY: That includes me. I have 17 people living in my home. I keep seven of my grandchildren. There’s no housing. We can’t afford to buy a house. 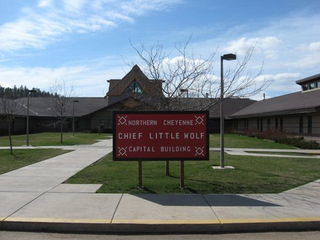 KRAKER: But both Limpy and Spang acknowledge the Cheyennes’ own environmental laws could be a roadblock.

LIMPY: It costs money for the companies to comply with the high standard of the clean air act that the tribe won at U.S. Supreme Court.

KRAKER: Would there be any consideration of lowering that air quality standard?

The question clearly makes Spang uncomfortable. He holds his hand up to signal he doesn’t want to answer.

WHITEMAN: We’re driving down Lame Deer, Montana, Cheyenne Avenue. We even have a four way stop downtown. What you see here is like third world conditions.

KRAKER: Philip Whiteman Junior cruises the tribal capitol’s main drag—not much more than a gas station, cafe and some boarded up storefronts. Whiteman is one of the most vocal opponents of coal development.

WHITEMAN: A lot of people think that industrial culture, gas, coal, all of that is going to bring in money, jobs, then plus they even promise Dollar Store.

KRAKER: He gestures out the window as we drive north out of Lame Deer, past horses grazing in rolling pastures.

WHITEMAN: Look at this beauty of this land. It’s priceless. Substitute that for a dollar store? That’s what our people are faced with today.

KRAKER: Whiteman’s taking me to one of his people’s most sacred sites, Medicine Deer Rock. It's where the famous Chief Sitting Bull led Cheyenne and Sioux warriors in a Sun Dance before the Battle of Little Big Horn, where General George Custer was killed. It was a defeat that shocked America. But the victory was short-lived for the Cheyenne—they surrendered less than a year later.

WHITEMAN: Bless myself with Mother Earth. Offer tobacco in the four sacred directions.

KRAKER: Whiteman finishes his prayer and leads me around the rock. It’s lined with huge pictograph panels, like a giant stone art gallery. One image depicts the vision Sitting Bull had before the battle, of Custer’s soldiers dying like insects.

WHITEMAN: Look at the soldiers. Falling into the camp like locusts. They’ve got grasshopper legs.

KRAKER: Around the rock people have tied bright prayer cloths to trees, others have left offerings of food. 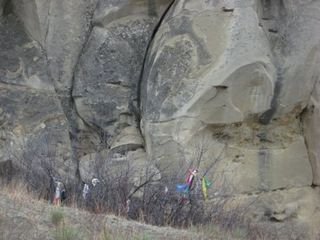 KRAKER: Whiteman believes the fight against coal is just the latest battle for his people, who still refer to themselves as “the Fighting Cheyenne.”

WHITEMAN: We believe that we’re still fighting in many ways, to preserve and protect our language, culture, identity, and submitting to the exploitation of our land, what little land that we have left, could be devastating to our future generations.

KRAKER: For those Northern Cheyenne who oppose coal mining, it invariably comes back to wanting to protect the land their ancestors fought so hard for. Shortly after the tribe, in defeat, was forcibly moved to a fort in Nebraska, they broke out; and in the dead of a frigid winter trekked hundreds of miles back here.

LONEBEAR: There are a lot of people who made a grave sacrifice.

KRAKER: Ben Lonebear, only 29 years old, is the tribe’s treasurer.

LONEBEAR: And I think the rationale behind not developing those resources is based on the respect for those things. And that tearing up our land that was fought for and died for really, really hits home for some people.

KRAKER: But Lonebear also knows the hardship of living in a place where there’s practically no economy.

LONEBEAR: From the treasurer’s standpoint, I believe that 85, maybe 90 percent of the money that comes into the tribe comes in the form of assistance from the federal government. 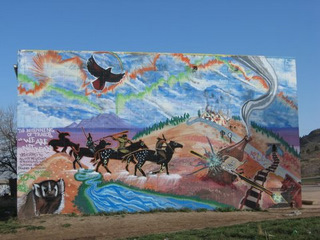 A mural painted on the side of an auto repair shop in downtown Lame Deer, encouraging young people to stay away from alcohol.(Photo: Dan Kraker)

KRAKER: To become more self-sufficient Lonebear doesn’t rule out coal. But he believes the tribe should explore renewables first. The Department of Energy says there is enormous wind potential on the reservation. And that’s the route local environmentalists, like Alexis Bonogofsky with the National Wildlife Federation, are urging the tribe to take.

BONOGOFSKY: It’s a false choice they’re being presented with, to be backed up against the wall, and say you have to develop your minerals or else you’re going to remain in poverty, it’s a horrible position to be in.

KRAKER: But there may be something even more fundamental at stake for many Northern Cheyenne, than whether they mine their coal or leave it in the ground, or even build wind turbines.

For people like Ben Lonebear, the key is cultural survival, not economic prosperity. If the tribe loses its language and ceremonies, he says with sadness, then they become just regular Americans, like everyone else.