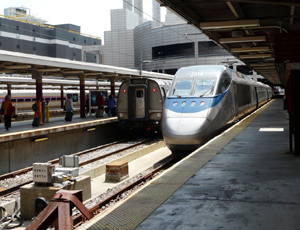 Trains have played a major role in America's history, and many say they'll be even more important in the future. Host Bruce Gellerman heads out to Boston's South Station to talk with Harvard professor John Stilgoe about the first annual National Train Day.

GELLERMAN: The golden era of trains, when streamlined Pioneer Zephyr and Pullman cars were just about the only way to get from city to city, is long gone. Yet the glamour and mystique of railroads past remains deeply rooted in the American psyche. But Harvard Professor John Stilgoe boldly predicts trains will soon play a fundamental part in the nation’s future.

GELLERMAN: In his new book, “Train Time: Railroads and the Imminent Reshaping of the United States Landscape,” Professor Stilgoe says trains will supplant highway and air travel in the next few decades. I met Stilgoe to talk trains at Boston’s historic railway station. 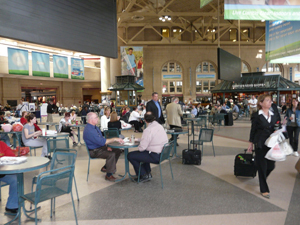 STILGOE: We’re sitting at a table in South Station, which opens on a newly reactivated railroad line to Greenbush in Scituate, Massachusetts. The railroad line was abandoned in the ’50’s, it was a nature trail for 50 years, and the train came back a year ago. From this concourse in about 57 minutes, you can arrive, even in rush hour, at a brand new railroad station that is a two minute walk from a world class marina surrounded by condos.

GELLERMAN: What indicators, if any, are there that more and more people are taking the train?

STILGOE: Well for one thing, the ridership statistics even on subway lines are up, especially in the last six months, because the price of gasoline has risen. For another thing, it is pretty clear that people are taking trains in places that didn’t have commuter rail service a little while ago, because the service has been installed in the last five years. And beyond that, it might be wishful thinking, but an awful lot of real estate investment is going into where the railroad used to run and where it’ll run again. 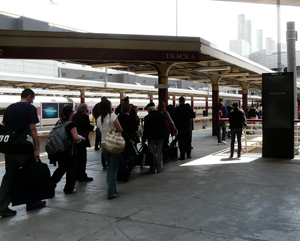 STILGOE: Big money. I think more Americans should understand how much money is being invested along railroads, even if the investment doesn’t take physical form right now. People have bought the land because the train is coming back.

STILGOE: It’s location, and I really, as far as I can learn, it is where the dot com boom money went.

[BOARDING CALL OVER THE LOUDSPEAKER AT SOUTH STATION]

You get people like Warren Buffet investing heavily in the Burlington Northern Santa Fe Railroad. Warren Buffet knows more about investing than I do, but I do know that in 2002, the share price of CSX was about 15 dollars, and today, we’re sitting here in South Station and it’s 65 dollars.

GELLERMAN: I’ve seen the ads on TV that say, you know, shipping stuff by rail is the cheapest way to go.

STILGOE: And it’s going to become much more efficient. You can’t use your cruise control on most highways now because there’s too much traffic. On a railroad locomotive, you can set the cruise control, and then the engineer has to merely monitor the system. It’s extremely efficient. But it’s nowhere near as efficient as the electric service that’s going to spread across the United States.

GELLERMAN: So you’re suggesting that it’s going to be not diesel trains but electric trains.

STILGOE: I’m totally convinced that the electrification of the nation’s freight railroads is in he immediate future. People are starting to talk about electrifying the commuter rail lines. The projection for the train service out of this station demonstrates that an electric commuter train would operate about 125 percent faster than a diesel-powered train.

I’m very serious about where this country is going. My book “Train Time” deals with the problems of trucks moving from Mexico to Canada, not stopping in the United States except to fuel, clogging up interstate highways in the Midwest and high plains that never used to see this traffic, and essentially making people wonder, ordinary tax payers wonder, why this cargo isn’t on the Kansas City Southern, when you can run a freight train at 90 miles an hour, as happens frequently west of the Mississippi, it feels kind of sad to be sitting in a vehicle on a publicly-built highway where the speed limit’s 65 or 70. And once people see freight trains moving at 70 or 75 miles an hour, they start wondering why there can’t be a passenger train. 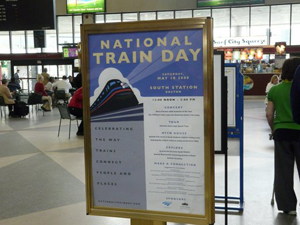 GELLERMAN: The name Amtrak has become synonymous with ‘no-go.’

STILGOE: Most of Amtrak trains share the tracks with freight trains, and it’s pretty tricky to keep the freight trains out of the way of the passenger trains. The suggestion I have for the American public is, double track the freight lines again the way they were into the 1950’s.

STILGOE: It means having two tracks, one track in each direction. West of St. Louis a lot of the nation’s freight railroads are now adding a third track, because there’s so many freight trains moving that they have to get the faster trains around the slower ones. Once we get the freight railroads back to the condition they were about 1950, I think Amtrak will have a golden opportunity to prove itself.

GELLERMAN: So in a sense we’ve come full circle. The technologies that got us here, that brought us here, are the stuff that’s gonna take us into the future centuries?

STILGOE: My students figured out there was overnight mail service, first class mail, between New York and Chicago, for the price of a first class stamp. Nowadays you’d have to pay a lot of money to get something overnighted. But the real key is that meant there was very frequent fast mail service between places like New York City and Harrisburg, Pittsburg, Cleveland. We’ve forgotten all of this.

GELLERMAN: Are you familiar with the British classic movie ‘Night Mail’?

STILGOE: I am familiar with it, and I think that there ought to be more mail trains. And I’ve run computer simulations of how things could move around this country if we had the 10,000 mail trains operating we had operating in 1929.

You could order a refrigerator, for example in the evening, and it would be delivered to your house at noontime the next day. You could do that in 1929. You can’t do it today.

GELLERMAN: So professor, how are you gonna celebrate or commemorate National Train Day?

STILGOE: I’m simply going to look out the window of my commuter train and wonder why more people don’t have a pleasure like this. National Train Day ought to be celebrated by all of us trying to use our common sense. The country can’t continue to do this. Anyone who drives across the George Washington Bridge in New York should know that the Regional Plan Authority estimates in three years, every vehicle crossing that bridge will be a truck. Well there’s no new bridge being built next to it. So the cargo has to move onto the tracks. It’s common sense, it’s coming, and people are investing in it.

GELLERMAN: So the answer is, get aboard the train.

STILGOE: The answer is, buy a house or a condo near a commuter train that will get you to work and give you some pleasure at the same time.