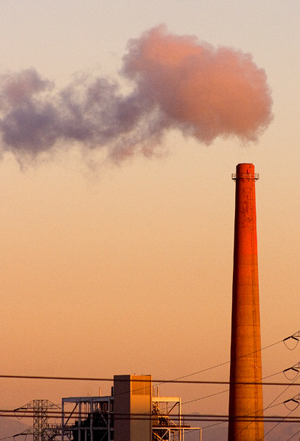 Power plants, like the Potrero Power Plant in the Dogpatch neighborhood of San Francisco, could pay 4.2 cents for every metric ton of CO2 released from their smoke stacks. (Photo: Pete Geniella/petegeniella.com)

San Francisco Bay air officials are about to assess 1.2 million dollars in fees on businesses for emitting greenhouse gases. It's one of the first instances of a carbon tax in the United States, and the real motive may be to keep the idea of a carbon tax in play.

GELLERMAN: Call it a tax or call it a fee, the idea of putting a price on producing carbon dioxide is political poison in the nation’s capital, but one city’s poison may be another’s solution.

The air pollution agency in the San Francisco Bay Area is considering a carbon tax on thousands of businesses, and the idea is likely to catch on elsewhere. Living on Earth’s Western bureau chief Ingrid Lobet spoke with experts for and against a CO2 tax.

LOBET: Jack Broadbent is CEO of the Bay Area Air Quality Management District and he joins us first. Hi Jack.

BROADBENT: Thanks for having me.

LOBET: And who would pay the highest emissions fee if the agency does go ahead with this?

LOBET: And what’s the total amount that would be collected?

BROADBENT: The total amount that we’re seeking to collect is about 1.1 million dollars.

LOBET: Now, California is actually doing what the United States hasn’t yet – it’s limiting the amount of climate changing gases allowed to be released in the state; they’re sorting all that out now as we speak. Why impose a separate local fee in just the Bay Area while officials are still working out the final shape of California’s statewide limits? 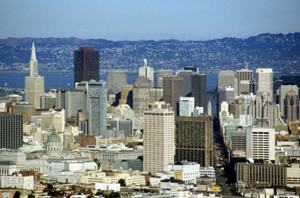 BROADBENT: We believe the climate change issue, first of all, has to be tackled on a federal, state, and local level. This fee that we’re developing and proposing is to be able to cover the cost of the program we’re implementing locally. We have a variety of climate protection activities here. They include an inventory of greenhouse gases; we of course engage with cities and counties in terms of their local land use decisions; we work with representatives of the refineries and the power plants to be able to identify and mitigate the greenhouse gases. So Ingrid, you can start to see that there is a great deal of work already underway that has been underway for many years here. It’s a natural linkage to have the local air pollution control agency develop programs that can complement both the state and the federal greenhouse gas reduction programs.

LOBET: Is this also a way of trying to perhaps nudge the California process more toward a carbon tax or carbon fee system rather than a cap and trade system, which Governor Arnold Schwarzenegger and many Republicans prefer?

BROADBENT: Here in the Bay Area, while we want to be able to work very closely with the state and the federal government, we just hope that they take this time and opportunity to be able to, of course, take and look at, what is the best approach. Now, will they do anything other than a cap-and-trade, I would tell you, probably not, but (laughs) there is a lot of tools and instruments out there that could and should be examined.

LOBET: Jack Broadbent is chief executive officer of the Bay Area Air Quality Management District in California. Thanks for being with us.

LOBET: And as he mentioned power plants and refineries where we turn crude oil into gasoline would pay some of the highest fees under this plan, Cathy Reheis-Boyd is with the Western States Petroleum Association, a petroleum industry trade group. And I take it that you’re not thrilled with the idea of a carbon fee imposed by a local authority.

REHEIS-BOYD: That’s correct. Any taxes or fees that impact refineries, or any other providers of energy, increases the cost of providing energy or transportation fuels to California consumers. And as you can imagine right now, those consumers are already understandably concerned about rising energy costs.

LOBET: But as the San Francisco Bay Area officials say, it’s costing them money to start counting all the emissions in the Bay Area, and counting those of the refineries is one of the biggest headaches. Why shouldn’t they charge your members for that trouble?

Power plants, like the Potrero Power Plant in the Dogpatch neighborhood of San Francisco, could pay 4.2 cents for every metric ton of CO2 released from their smoke stacks.

REHEIS-BOYD: We just spent the last year and a half providing all of that inventory information to the California Air Resources Board. It was a very deliberate, extensive process for anyone who has to comply with the Global Warming Solutions Act. And, so we have already prepared and are going to be submitting all of the detailed information to the state with regards to what we call, ‘who emits what where.’ And so I find it interesting that the local districts would feel that they need to duplicate what has already spent a year and a half of everybody’s time doing in a very detailed manner.

What I would like to see, in a perfect world, is that we all use our collective talents and wisdom to develop an overall state program, and how we are going to meet these very aggressive climate change goals from an overall state perspective, and then talk about how some of the implementation may naturally fall within the local districts’ purview. But to develop local programs and charge fees on local programs when we don’t have an entire state program adopted to me appears quite premature and duplicative.

LOBET: Cathy Reheis-Boyd is chief operating officer of the Western States Petroleum Association. She joined us from San Rafael, California. Thanks for being with us.

REHEIS-BOYD: Thank you very much.