Green Goes to the Boardroom 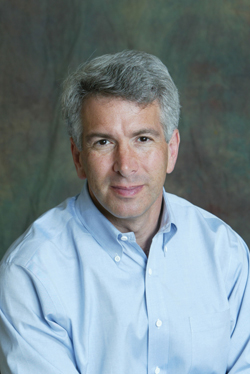 CURWOOD: From the Jennifer and Ted Stanley Studios in Somerville, Massachusetts – this is Living on Earth. I’m Steve Curwood.

This year, Earth Day is 38 years old, and we know what that means: it’s nearly middle aged, time to settle down. Gone are the bullhorns and barricades of Earth Day 1970, when millions paraded to protest the ecological destruction of our planet. Instead these days it seems the call for environmental action is being taken more to the boardrooms than to the streets.

Some see this shift as a softening in the resolve of one-time protesters who have since mellowed into parents and grandparents. But others see the trend as the maturation of a movement that must reconcile with the establishment to bring about meaningful change. We’ll hear from both perspectives today, and we start with Fred Krupp, longtime president of Environmental Defense Fund and co-author of the new book, Earth: The Sequel. Hello, Fred.

KRUPP: Hi Steve, how are you?

CURWOOD: I’m good. And, tell me – your book title scared me a bit. Earth: The Sequel. Does this mean we’re gonna need another planet?

KRUPP: No. It means that we all know the current story: melting glaciers, rising sea levels, strengthening hurricanes, dying coral reefs. It’s sort of like a slow motion, sci-fi horror movie unfolding before our eyes, and the stakes are very real and very grave. The sequel is all about how we get out of this fix. It’s a hopeful story about inventors and engineers figuring out what we need to do to generate clean energy and have a future thriving planet. 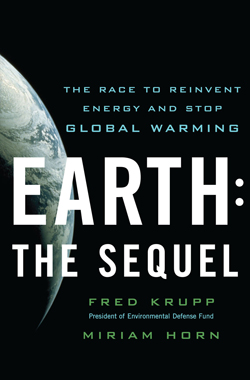 In “Earth: The Sequel,” Fred Krupp describes an historic transformation of the energy industry that will create a new wealth and slow the warming of the planet. (Photo: T. Charles Erickson)

CURWOOD: Now in your book, you describe this energy revolution that’ll solve global warming and go down as one of the greatest transformations in history. But these revolutionaries that you talk about – they aren’t environmentalists; they’re entrepreneurs, I would say.

KRUPP: They are indeed. You know, it’s an irony that the profit motive got us into this fix, because the market system does not account for the cost of global warming pollution that we throw into the air. Once we pick up that profit motive and turn it upside down and align it with what we need, we actually are able to harness entrepreneurial energy, thousands of inventors and businessmen, who suddenly are required to inculcate in every decision the cost of throwing global warming pollution into the air, and are rewarded only when they realize the benefit of taking global warming pollution out of the smokestacks, or even, if they can do it, right out of the air.

CURWOOD: Now – it’s true. Every week we seem to hear about some brilliant new technology that’s gonna help address the problem of global warming. But we’ve yet to see much change. Emissions keep rising. What’s it gonna take for all these great ideas to become reality?

KRUPP: Well the key thing, Steve, is, we’ve never solved an air pollution problem anywhere in he world without putting a legal limit or cap on the amount of pollutants that could go into the air. And so these technologies, whether they’re solar energy or wind power or wave power or geothermal – they are enormously cheaper for the atmosphere because they involve no pollution, but they now are being asked to compete while we give this huge subsidy to burning fossil fuels.

So what I consider really the starting gun to start this great and important race is government in the United States clamping down, putting a legal limit that declines over time on global warming pollution being dumped into the sky.

CURWOOD: So, in the meantime, we’re waiting on our government to do something here. Uh, what should we do while we wait for these changes to take place? I mean, the United States is good for, what, a quarter of the world’s carbon dioxide emissions? And we’re, what, five percent of the world population?

KRUPP: Yes, China and the United States unfortunately lead the world in pollution, with Brazil and Indonesia – through the burning of their rainforest – number three and four. First of all, we shouldn’t just wait. We need to participate as citizens. Once we come to understand that global warming is not all doom and gloom – that it is very solvable – I think that leads us to wake up and engage in the political process.

CURWOOD: You’re trained as an attorney. Environmental Defense Fund is an organization that is known as – hey, if you pollute, you know, we’re gonna put a lawsuit down the chute.

KRUPP: Absolutely. Our initial, if informal, motto was, ‘sue the bastards.’ But we have found that if we can get the business community to work for our goals, that’s even more effective.

CURWOOD: At the first Earth Day, corporations were really in the center of the target, seen really as engines of greed and of pollution. Obviously your take on how to solve environmental problems differs vastly from that approach. To what extent do you think those protests were a mistake?

KRUPP: I don’t look back with regret; I think it was important that we checked the worst abuses. It was important that we ban lead, it’s important that we get mercury out of the system – there are some abuses that just need to be banned and outlawed. But for some problems like global warming, where pollution is so widespread from so many activities, it’s really not the question of saying, ‘don’t do this, don’t do that’ – it’s the answer that has to be constructing the future. We have to get corporations, engineers, entrepreneurs, to be at the center of problem solving if we’re gonna get the innovation that we need.

CURWOOD: In your view, what can’t the market do for global warming?

KRUPP: The market can’t do what only we as citizens can do. And that is, say to our elected officials, ‘Enough. We need a legal limit or a cap that declines as fast as the scientists tell us it must decline. The market can’t and will never do that. That’s something only you and I as citizens can do. And it’s time to rise up and demand that every senator and every Congressman be for a strong climate change bill.

CURWOOD: Fred Krupp is president of the Environmental Defense Fund and recently wrote Earth: The Sequel together with Miriam Horn. Thank you so much, Fred.