Mid-America Wades in the Water 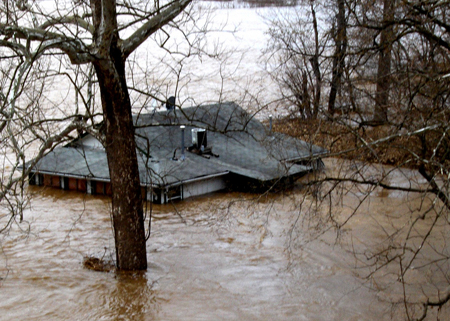 Torrential rains and overflowing rivers and levees have devastated many areas of the country, including Arkansas. Sandra Patterson of the Office of Emergency Management in Des Ark, Arkansas tells host Bruce Gellerman about the toll the floods are taking in her county. We then turn to Tim Kusky, professor of natural sciences at St. Louis University, who says that levees and climate change have made the 100 year flood a misnomer.

ANNOUNCER: Support for Living on Earth comes from the National Science Foundation and Stonyfield Farm.

GELLERMAN: From the Jennifer and Ted Stanley Studios in Somerville, Massachusetts – this is Living on Earth. I’m Bruce Gellerman, in for Steve Curwood.

Torrential thunderstorms have been soaking the middle of America. From Illinois to Mississippi, rivers have overflowed their banks and levees flooding hundreds of thousands of acres, devastating crops, filling homes and businesses with water, killing at least 17 people.

Arkansas has been particularly hard hit. When I spoke with Sandra Patterson, coordinator for the Office of Emergency Management for Prairie County, she was waiting to learn if her county would join 35 others in Arkansas that had already been declared federal disaster areas.

PATTERSON: It’s pretty bad. Probably 35 percent of our county is under water. The last time we had a flood this large was in 1973 and that was the biggest one since our ’49 flood, which was 37 feet.

GELLERMAN: But you knew this was going to happen, right?

PATTERSON: We didn’t know we were going to get this much water. It was predicted about three feet lower. And then, all of the sudden, the water just kept coming so fast and we had dams break north of us that put more water down on us. When it finally got here, it just backed up so fast you could almost see it moving. It kind of overwhelmed everybody. 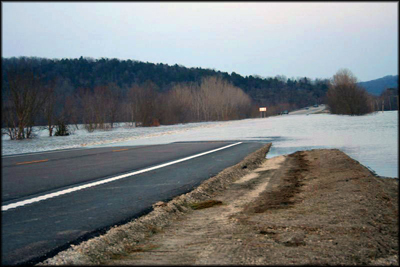 The Gasconade River pours over a highway near Mt. Sterling, Missouri.(Photo: Drew Backues)

GELLERMAN: Ms. Patterson, what do you do now? What do you tell the people of Des Ark, Arkansas?

PATTERSON: We’ve declared an emergency here in Prairie County. We’re waiting on FEMA maybe or the president to, hopefully, declare us a federal disaster so we maybe can get some assistance. We know we’ve got washed out culverts and we know we got washed out roads. You know, we don’t have the money to fund it and maybe not even the manpower to get this stuff fixed back.

GELLERMAN: Sandra Patterson is coordinator for the office of emergency management for Prairie County, Arkansas. Tim Kusky teaches natural science at St. Louis University and is the director of the Center for Environmental Sciences there. He says flooding along the Mississippi River is all too familiar.

KUSKY: That’s right, we’ve been getting more and more floods as time goes on along the Mississippi and Missouri River systems.

GELLERMAN: Well, they’re saying that this is one of those floods that occurs once in a hundred years.

KUSKY: Well, that’s becoming a bit of a misnomer because we’ve had around six or seven or even eight hundred year floods in the past 100 years.

GELLERMAN: Eight in one hundred years?

KUSKY: Well, they’re getting worse for any given amount of water. There’s a few different reasons for this. One of the reasons is that over the past 150 years or so we’ve built around 2,200 miles of levees and other constructions that serve to constrict and confine the river channel along the Mississippi and Missouri River systems. So, when we make the river narrower what happens is that we make the flood stages or the flood heights become higher. It makes it rise faster. It makes the water move faster downstream and increases its erosive power that can knock down levees and cause devastating floods. 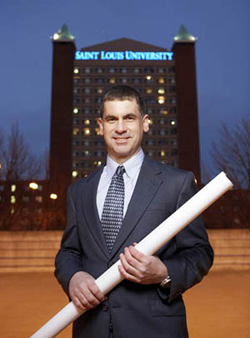 GELLERMAN: And then you have the problem of development along the flood plains.

KUSKY: Yeah, that’s another problem is that even if the water was to flow across the flood plain it can’t seep into the soils as much as before because we’ve developed the flood plains extensively. For instance, since the 1993 flood in the St. Louis area we’ve built around close to 30,000 new homes in areas that were under ten feet of water in ’93. So, those areas are now impervious to water and all that water has to go somewhere.

GELLERMAN: Don’t people realize this? I mean, you know, flood me once shame on you, flood me twice shame on me.

KUSKY: It should be that way but what happens is that people don’t really understand that the risk is increased the more and more we build levees.

GELLERMAN: I know that one of the largest, if not the largest, strip mall in the United States is just west of St. Louis and they built it with a levee that was supposed to be in a one in 500 years flood plain.

KUSKY: Yeah, that’s in the Chesterfield Valley. That area has seen more development since the ’93 flood than in the entire previous history of the region. And all of that area was under about 10 feet of water in ’93. And what people have done is made calculations of the risk of things they call the 100-year flood or the 500-year flood based on old data. So, those risks are actually higher than previously thought. And another factor that’s coming into play here is that climate models predict that within 30 years we’re going to be receiving around 20 percent more rainfall in this area which equates to about 50 percent more water flowing through the rivers at any given time throughout the year. 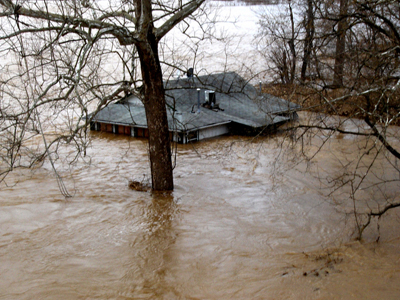 A house goes under in Jefferson County, Missouri.(Photo: Kristin Badolato)

GELLERMAN: What does that do to the 500-year levee?

KUSKY: Well, it means it’s not going to be a 500-year levee anymore. It means that places where these kinds of changes happened before, things like the 100-year flood suddenly become about the seven-year flood.

GELLERMAN: Why does it always surprise people along there? Why do we always see these floods happening and people in trees?

KUSKY: Well, the attraction to building a levee is that if you’re in a town that gets flooded every once in a while you would like to build a levee around your town to feel safer. And the politicians and the developers will tell you that once you build this levee you’re going to be safe. And that might be true. You might increase your safety by building a very strong powerful levee. But the more and more of them that we build, we’re displacing that water that could have flowed into those areas and we’re making the water rise higher somewhere else. So, you build a levee, then your neighbor builds a levee that’s higher then you have to build your levee higher. And it just gets worse and worse and worse.

KUSKY: Thank you and have a nice day.