The Future of Human Health 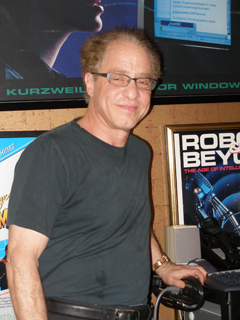 In the second of a two-part series, host Steve Curwood sits down with famed inventor and futurist Ray Kurzweil to discuss human health, and look into the future when humans will become enhanced by machines. Kurzweil says that nanobots will soon go inside our bodies to repair damaged areas and add years to our lives.

CURWOOD: A few weeks ago we featured music from the Kurzweil synthesizer... and a conversation with its creator- Ray Kurzweil. He's a renowned inventor – he’s created robots and reading machines for the blind as well as the synthesizer, and now he’s using his knowledge and skills to imagine the future. He explains them in his latest book, "The Singularity Is Near: When Humans Transcend Biology."

Part of that transcendence, he believes will be a dramatic improvement in human health. As he explained when we visited him in his Kurzweil Technologies office outside of Boston, Massachusetts that’s because he’s faced his own health problems... a personal battle with diabetes that set him thinking.

KURZWEIL: I do have an interest, an acute interest, in health. I developed type two diabetes about twenty years ago. Tried the conventional approach and actually made things worse. So I developed my own approach using nutritional supplements, and nutrition and lifestyle- overcame my diabetes. I’ve had no indication of diabetes for the last twenty years. But it did actually, more than just dealing with this one specific health challenge, gave me the idea that we can really overcome our health challenges with the right ideas. And it really put me on this path of really addressing health challenges. So, I encountered another health challenge, which was middle age...

CURWOOD: That’s a challenge familiar to many of us, but Ray Kurzweil thinks he's beaten it - with a regimen of dozens of vitamins and nutraceuticals. Now, he may look like he's in his late 50's, but he says according to blood tests and lab results his body acts like it’s 40. He's collaborated with physician Terry Grossman on a book to chart the way to extending healthy life. It’s called “Fantastic Voyage- Live long enough to Live Forever.” 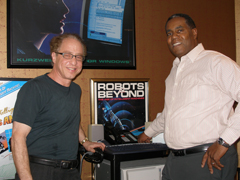 KURZWEIL: The basic thesis is that there are three bridges, to dramatically extending our life- to radical life extension. And what I’ve been talking about now is bridge one. Using today’s knowledge and our knowledge of ourselves to develop a personalized approach to addressing your own health challenges, whatever they may be, to bring us- particularly us baby-boomers, especially those in good shape, only 10-15 years from now where we’ll have bridge two which if the full-flowering of the biotechnology revolution where we’ll have the means of re-programming our own biology.

CURWOOD: You say this with great confidence - It’s not we’re likely to - you say this as if it’s done already.

KURZWEIL: Well, we actually have the means of re-programming the basic principles of our biology- we can turn genes off that’s a new thing. Now health and medicine is transforming from a pre-information era where we really didn’t have information models of how biology worked. It was really hit or miss- oh here’s something that lowers blood pressure, but we don’t know why it works and there was no theory of operation and invariably these drugs have side-effects. The new paradigm is a really understated disease process and aging process set of information processes and reprogram them... Not that each of these techniques is guaranteed to work but it’s a much more powerful methodology and the really important point - comes back to what I said earlier- that now that health and biology and medicine are becoming information technologies, they are subject to what I call the “Law of accelerating returns” which is this doubling of the power of these technologies every year. And you could see it in the genome project- the amount of genetic material we’ve sequenced has doubled every year. Very smoothly for the last 15 years. The price has come down by half every year. So, things that were not feasible before are becoming quite affordable. And 10-15 years from now it’s going to be a very different world in our ability to program these information processes…

CURWOOD: So, information and understanding about how the body functions, and the ability to manipulate those processes. Ray Kurzweil says that’s the second bridge - the key to better health in the medium term. Then comes bridge three.

KURZWEIL: Bridge Three is nanotechnology. The quintessential application, I used to say "killer app" but people didn’t like that in the context of health- is nanobots. Basically, blood-cell-sized devices, that can go inside the bloodstream and actually perform therapeutic functions inside. By the 2020’s this will be quite routine to send millions or billions of these nanobots, as they’re sometimes referred to- to keep us healthy from inside and also go inside our brain and expand our mental functioning.

CURWOOD: So what kind of lifespan do you expect when these kick online?

KURZWEIL: Ultimately, there’s really no reason why they can’t reverse any kind of damage that occurs. I mean how long does a house last? Well, it depends on whether or not you take care of the house. If you have a policy that you're aggressive- anything that goes wrong you immediately fix it, occasionally you upgrade systems like the HVAC, the house can go on indefinitely. In fact we do have structures that have lasted thousands of years. Now why doesn’t that apply to the house we live in: our bodies? Well, one difference is we understand how a house works. We know how to fix all the things that go wrong with a house, because we created houses so we understand their principles of operation. We don’t yet have all that knowledge about our bodies. We don’t have a full understanding of the biology, so we can’t fix everything that goes wrong, but that’s my thesis- that within about 20 years we will have fully reverse-engineered biology. We will have the means through biotechnolgy and nanotechnolgy to fix anything that goes wrong- ultimately at the cellular level- and at the molecular level- with nanobots going inside our body and fixing each cell as something goes wrong. And that would really enable us to live indefinitely,- it’s a little bit different than a guarantee, I mean you could end up in an explosion somewhere or something. But it will really extend our human longevity indefinitely. According to my models we will be adding more than a year, every year, to your remaining life expectancy in about 15 years. So as you go forward a year, your life expectancy will move away from you.

CURWOOD: And part of making life longer – just as you replace broken or worn out parts of a house - is replacing and upgrading biological components in our bodies that fail….

KURZWEIL: So we'll be replacing at different levels cells, tissues, even whole organs with machines that perform much better. Our thinking takes place in the intra-neural connections in our brains, which is very slow, they send signals using chemical signals which travel a few hundred feet per second. Electronics is a million times faster. So, ultimately we'll be able to re-engineer our bodies and brains to be much more capable.

CURWOOD: Upgrade huh? We're going to be upgrading ourselves?

CURWOOD: So at what point does the upgrade become, rather than us, a machine?

KURZWEIL: Well how-- you know we have this idea of a machine as something less than us, as kind of pejorative. But, that's because the machines we've met are much less than human beings. But that's what's going to change because of this exponential growth of the complexity of our technology. Our technology will be as complex and as subtle and as supple as our biological friends by the late 2020's, 2030's, and in fact be derived from human design and in fact humans are going to incorporate a lot of this technology for better health and better communication, and better intelligence and memory.

CURWOOD: That was the second of a two-part conversation we had with Ray Kurzweil – the man. Ray is an inventor and author of the book that explains his vision for the future: "The Singularity is Near: When Humans Transcend Biology."


Ray Kurzweil's vision for the future

Ray Kurzweil's latest book: "The Singularity Is Near: When Humans Transcend Biology"