Awanui Black is working on one of the first comprehensive dictionaries in the Maori language. (Photo: Durrell Dawson)

Over a relatively short time, understanding the Earth's climate history has become one of the most happening areas of scientific research. In New Zealand, climate researchers are trying to glean climate knowledge from the country's original inhabitants, the Maori. Durrell Dawson reports some of these researchers are Maori themselves, and that gives their work a certain poignance.

CURWOOD: For millennia indigenous peoples have relied on fishing for subsistence, building up a keen knowledge of how, when and where to catch fish. And this ancient knowledge is giving some modern scientists yet another way to measure the impact of global warming.

As part of our special series, “Early Signs: Reports from a Warming Planet,” we go to New Zealand where the Maori have been fishing for eels for more than a thousand years. Young Maori researchers are now hearing stories from their elders that suggest the traditional eel fishing seasons are changing.

Our series on climate change is a collaboration of the UC-Berkeley Graduate School of Journalism, Salon dot com, and Living on Earth. From New Zealand, Durrell Dawson has our report.

DAWSON: It’s January, the peak of summer in New Zealand, and a frisky white dog darts along a narrow dirt path stretching along the Waitohu Stream in the coastal town of Otaki.

DAWSON: A group of children are not far behind the dog, as they bound down the path they squeeze past environmental researcher Pataka Moore as he looks down on one of his fishing and eel catching spots.
MOORE: That’s one of our main ones here. Recently we um got about 60 or 70 about a month ago.

DAWSON: He comes here at night to catch the nocturnal long-fin eel, which can grow four feet long. The fish are a good source of protein, and in New Zealand’s indigenous Maori culture they are considered to be taonga – something treasured. Pataka prizes them as an indicator of how well the river is doing – the water’s oxygen level and temperature. He inspects the fish for fungal growth and disease.

MOORE: You can take those eels and look at them and assess them, and they give you a pretty good indication of what the health of the stream is like.

DAWSON: Pataka is also gauging how clean the stream is by interviewing Maori elders almost three times his age about the eel. It’s a hard job. A lot of knowledge has faded since British colonization, and many elders are wary of divulging what’s left. But for a younger generation of Maori, like Pataka, oral histories hold valuable information, like what time of year the eels leave New Zealand’s North Island, or Aotoroa, as Maori named it. Usually, the eel exodus from New Zealand to Tonga marks the end of summer. This year, some of the eel started early.

ROYAL: And it’s not normal. 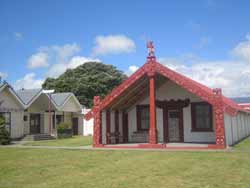 DAWSON: Caleb Royal works with Pataka in managing Otaki’s freshwater stream. He shields his eyes from the sun while sitting next to Pataka on the porch of their red Maori meeting house, called a “marae.” The plastic roof above their heads expands under the heat and creates a frenetic popping. Summer is only halfway over, but Caleb has noticed a confusion in the eels.

ROYAL: This year, I caught some eels before Christmas that looked like they were heading out to sea. That didn’t happen 30 years ago, 50 years ago, but it’s happening now. March, April is your typical time when your summer was finishing and you’re going into your autumn period, and it’s when you get the first of the autumn rains that the eels would en masse migrate, migrate down the rivers and out to sea. Now, due to our changing weather patterns, we’re getting all sorts of various migrations at all different times.

DAWSON: Images of eel have appeared on Maori artifacts and throughout oral histories. But Caleb and Pataka say, according to the oral histories, never has the eel migration been so erratic. Eel migrations correspond with changes in local water temperature and rainfall. But New Zealand’s weather has been increasingly volatile, throwing the eel off.

This past summer was one of the warmest and driest in the Otaki area. But the summer before that, there was a massive flood. New Zealanders are accustomed to extreme differences in a climate where you can get four seasons in a day. But some Maori are saying that lately the seasons are different.

MOORE: These days you just don’t know when a drought is going to come, and when a heavy cold – whether it’s going to be a cold winter or a warmer winter. I suppose it’s those patterns, I don’t know if they’re global or whether they’re just affecting us down here in the South Pacific. But they’re definitely having an effect on our resources and us.

DAWSON: It would be a mistake to think that many Maori still live close to the land. The majority of Maori live in cities far from their tribal areas. With the country’s highest unemployment, lowest numbers of college-graduates, and highest numbers of people with health problems, most Maori aren’t tracking the migration of the eel. But that doesn’t mean they have nothing to lose.

DAWSON: Awanui Black works at Otaki’s Maori university, Te Wananga-o-Raukawa. He specializes in Maori language and culture, and he’s working on one of the first Maori language dictionaries. The environment, he says, is the essence of Maori culture. And he’s concerned about the possible effects of climate change on a people who’ve already weathered colonization and Western influence.

Awanui Black is working on one of the first comprehensive dictionaries in the Maori language. (Photo: Durrell Dawson)

BLACK: As tribal groups we relate not only to this country, but we relate specifically to places in this country. Places that are sacred to us that have mana, that have maori, that have whe, that have ihe, that have tapu. If we’re to lose some of these key components of what makes us us, elements of our culture, I mean, once that’s lost, what do we become? I mean genetically we’re going to survive, once we lose those other aspects of our culture, our character, our personalities – once that’s gone, there isn’t anything necessarily left that makes us different from anyone else or anywhere else. 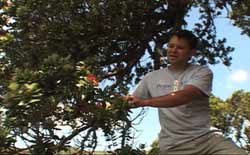 Darren King holds a pohutakawa blossom which is seen by some Maori tribes as an indicator of how long and dry the upcoming summer will be. (Photo: Durrell Dawson)

DAWSON: In Maori, Awanui says there are at least fourteen different words for rainbow. And often words take on dual meanings. Te areare o te ua means a certain direction of falling rain. Awanui crouches down to demonstrate its other meaning. Above his head he holds a long wooden paddle, the traditional Maori quarterstaff.

BLACK: When waiting in battle the weapon is held at this angle, and that’s the path of the rain you see—te areare o te ua. I’m just trying to convey the consistency within Maori culture how one thing relates to the other.

DAWSON: And it’s because of these connections that science has started to pay more attention.

[FEET CRUNCHING ALONG THE FOREST]

DAWSON: Darren King dodges tree branches as he hikes up a nature trail about an hour northwest of Auckland, New Zealand’s largest city. He once worked as a tour guide here. But now he’s a paleoclimatologist at New Zealand’s National Institute for Water and Atmospheric Research, which has a Maori research and development unit.

KING: For us, Maori environmental knowledge encompasses knowledge that was brought to Aotoroa by the earliest Polynesians, was developed through time over the generations of Maori in Aotoroa, and continued to develop with the arrival of Europeans right through until today.

DAWSON: Darren draws inspiration from his own Maori ancestry. He classifies this project as “for Maori” and “by Maori.”

KING: I get to keep one foot in a camp of paleoclimate, where I’m examining records of isotopes and examining time series of sometimes quite complicated data, and I get to balance that of course with rubbing shoulders with some incredibly generous and incredibly humble and incredibly knowledgeable people who I have links with myself. And that’s an incredibly satisfying thing to do, and I’m very lucky. 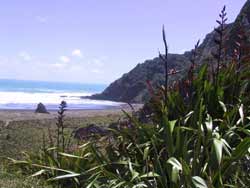 Piha Beach, north of Auckland, is one of many environmental references that permeate throughout Maori oral histories, language, and knowledge. (Photo: Alexandra Berzon)

DAWSON: Darren emphasizes that his work is a group effort. Like Caleb and Pataka, he has documented observations of a changing environment.

KING: In terms of some of the more recent observations, it seems that reduced frosts are a very common observation among most, if not all, of the elders that we interviewed. Increasing frequency of storms was another observation that was commonly described by many of the elders, as well as increasing unpredictability and unreliability of local weather.

DAWSON: It’s not clear what exactly is happening in New Zealand. Wind, rainfall, and temperature patterns are increasingly variable, which matches the changes predicted by global warming models. But many of these changes don’t have clear scientific explanations and nobody knows for sure if all this is all related to a warming planet. Many Maori aren’t even observing the changes. Some say economic concerns take precedence. But as environmental knowledge becomes more valuable, researchers hope to fill in New Zealand’s climate record with the knowledge of its original residents. For Living on Earth, this is Durrell Dawson.

CURWOOD: “Early Signs” is a collaboration of the UC-Berkeley Graduate School of Journalism, Salon dot com, and Living on Earth to document places around the world where concerns about climate change are already having an impact. To read a print version of the story about the Maori and see photos - visit our website Living on Earth dot org. That’s Living on Earth dot O-R-G.