We’ve all heard stories about little old ladies who keep dozens of animals in their homes. But few studies have been done on the syndrome of animal hoarding. Now, a consortium of human and animal researchers is trying to pinpoint the causes, and perhaps a cure, for the behavior. Margaret Combs reports from Boston.

CURWOOD: The people who keep large numbers of animals without providing them adequate care are known as animal hoarders. Some of the worst cases involve hundreds of animals. And by the time authorities discover the situation, many of the creatures are dead, or so ill they must be put down. Understanding the animal hoarding syndrome is not easy, but now animal and human health professionals are coming together to search for causes and a possible cure. Margaret Combs has our report.

DINNAGE: Hi honey, come on out.

COMBS: Veterinarian Julie Dinnage is in charge of animal protection medicine for the Massachusetts Society for the Prevention of Cruelty to Animals. At the moment, she is taking care of 11 extremely sick cats at Boston’s Angell Memorial Hospital, including Teddy, a middle-aged female with black and white long hair. Three weeks ago, they were all removed from the home of a 75-year-old woman where about 80 cats roamed throughout her house, defecating everywhere and trading diseases and parasites.

DINNAGE: This little girl, she is actually one of the older kitties from the home and on top of ringworm, she has very severe upper respiratory. She has chronic problems with diarrhea and, of course, a low body weight. We haven’t really been able to get a lot of weight on her.

COMBS: Teddy is a typical animal hoarding case, suffering from multiple problems. With intense care, she may survive. But another 60 percent of the cats in this house were found infected with contagious feline leukemia or a feline form of AIDS. Thirty of the cats were so sick they had to be euthanized. Many of the ones saved will be sick for life.

It’s easy to see why animal hoarders can be charged with animal cruelty. But Dinnage and her colleagues at the Massachusetts SPCA have known for some time that fines and prosecution do little to stop animal hoarders. Recidivism is nearly 100 percent. What’s more, there’s something confounding about animal hoarders that flies in the face of cruelty.

LUKE: Have we got someone who is malicious and evil here? Absolutely not. We’ve got someone who, if you were to interview them, the first statement out of their mouth would clearly be, “I love cats.”

COMBS: Carter Luke is the vice president of Animal Protection for the Massachusetts SPCA. He’s the man who goes to court, gets a warrant to enter a home, and seizes the animals. By the time he’s tipped off by someone by someone like a concerned neighbor or telephone repairman, most animals are already in crisis. He’s seen dead animals in cages or in freezers, some left so long they’ve mummified. And yet he believes that animal hoarders are painfully attached to their animals.

LUKE: They live for their animals. They may have disdained their work, their money, their house, their family, their children, all because their lives become absorbed in the treatment and care of these cats. So, it is not uncommon for us to be executing a search warrant and listening to the owner standing by screaming and crying. It is a brutal experience.

COMBS: Why would someone who loves animals let them suffer and die underfoot? Until recently, no one had a clue. Then five years ago, Luke and other healthcare professionals, both for animals and humans, formed the Hoarding of Animal Research Consortium, or HARC.

The group’s co-founder is veterinarian Gary Patronek from Tufts University School of Veterinary Medicine. He’s published the first statistics on animal hoarders. Drawing from case studies at ten agencies across the nation, Patronek found some evidence did support the stereotype of the little old cat lady down the street. Three-quarters of hoarders were female, nearly half were at least 60 years old and lived alone. However, Patronek says a significant number do not fit this profile.

PATRONEK: It crosses all demographic and socio-economic boundaries. We have seen this behavior in people who one might call socio-economically disadvantaged or marginalized. It’s also been seen in white-collar professionals who, essentially, are leading double lives. It’s been seen in people whose lives revolve around animal care, up to and including shelter workers and veterinarians.

COMBS: To dig deeper, HARC members have launched new studies on a number of fronts. Right now, they’re analyzing data from the first direct interviews with both animal hoarding caseworkers and hoarders themselves. Although it’s too early for definitive conclusions, animal hoarders do seem to have a number of psychological factors in common. Many tell of neglect or loss in their childhood. So hoarders seem to gain from animals what they have not been able to get from humans: reliable, consistent love. HARC member Michele Papazian is a clinical social worker at Children’s Hospital in Boston.

PAPAZIAN: One woman I talked to, she is living in a small trailer and has something like 78 cats. And she was saying, you know, when I come home after a hard day, I come in and I get enveloped, all of the cats come around me and they envelop me. And she said, it’s like a whirlpool for the soul. This is a person, like many of the people I spoke to, who can’t identify anybody that she is close with, that she can rely on.

COMBS: Like other members of HARC, Papazian suspects hoarding develops in stages. In stage one, things are under control and the person is often admired as an animal lover in the community. Then there’s stage two, when one too many stray cats have come through the door.

PAPAZIAN: Many people, I think, have a sense that they’re crossing the line, but there’s nobody else to take this pet and how can I turn—and it’s better than—some people said this: you know, it may not be ideal here because it’s overcrowded, but this cat, at least, is getting fed every day now and has a warm place to sleep and sleeps with the other cats and snuggles up. Yeah, maybe I do have 78 cats in a small trailer, but I know it’s still better for this animal here than out there. 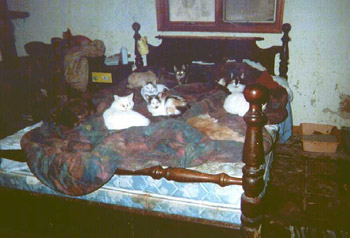 COMBS: This justification in phase two turns to denial in phase three, when animals begin to die. At that point, two different factors may be in play. One, most hoarders believe they’re on a mission to save animals. The rescue complex is so strong it may outweigh their judgment. A second factor is physical aging, and with it a decrease in awareness, perhaps some dementia. There’s even a theory that toxic levels of ammonia built up from cat urine could be contributing to befuddlement at this stage.

Altogether, stage three is marked by growing confusion, denial, and, most of all, fear of losing their animals. HARC member Jane Nathanson helps counsel and rehabilitate animal hoarders. She tells the story of a hoarder who received a letter from her town forbidding her to own any more animals.

NATHANSON: She was very disturbed by this. And I asked her, what troubles you more, the idea of not having or getting any more, or the prospect of having none, that they would through attrition die off and she’s not replenishing. And she said, having none. It really sent chills up my spine. It almost brought me to tears.

COMBS: By better understanding what drives people to hoard animals and getting them psychological counseling early on, HARC and its supporters, like veterinarian Julie Dinnage, hope to prevent the further suffering of animals, as well as the hoarders themselves.

DINNAGE: In a lot of instances we still work with these people and we will try to get a couple of animals back to them. Because I mean, the worst thing to do is deny them what they love, and that is the presence of animals.

DINNAGE (TO CAT): You’re purring now, but you still don’t want to come to the front.

COMBS: Back at the animal hospital, Teddy is up on her feet for the first time in days, rubbing against the bars of her cage. With a lot more care, Dinnage is hopeful Teddy and the other cats will eventually join 13 of their housemates who have already been put up for adoption or placed in permanent homes. For Living in Earth, I’m Margaret Combs in Boston.

CURWOOD: By the way, there’s a happy ending for Teddy the cat. We’re told she is doing well, has been adopted by a couple with two children and a dog on Martha’s Vineyard. We should all be so lucky.