John Ogonowski was the pilot of the first plane hit the World Trade Center one year ago. But Ogonowski’s life outside of aviation included his farm in Dracut, Massachusetts. Aside from his own business, he helped Cambodian refugees wishing to return to farming. As reporter Sean Cole reports, those involved in the mentoring program have done their best to continue it as a legacy to John Ogonowski.

TOOMEY: Last year we aired a story about a non-profit project that helps Southeast Asian refugees return to farming. One of the project’s mentor farmers was the owner of White Gate Farm in Dracut, Massachusetts. His name was John Ogonowski. But he also had another job. He was a pilot for American Airlines. And on September 11th it was his plane, Flight 11, that struck the North Tower of the World Trade Center. Since that day, those involved in the farmer program say the work has been harder without John Ogonowski. But as Sean Cole of member station WBUR reports, they’re determined to continue the project as a legacy to him.

COLE: John Ogonowski didn’t want to fly on September 11th. That was the day people were coming to tour the dozen acres of Asian crops flourishing amid the hay and pumpkins at White Gate Farm. Ogonowski and his wife, Peggy, had hosted such events before, and he told project director Hugh Joseph he would do his best to be around for this one.

JOSEPH: Finally, I got a call the night before from Peggy saying, ‘Listen, John’s not back yet, but he got the final word that he has to fly tomorrow. He can’t switch.’

COLE: Joseph never imagined that when he arrived at the farm the next morning, he’d be greeted with the news that Ogonowski was dead. Meantime, the Cambodian farmers were at their plots on the other end of the farm preparing a special lunch for their guests. Joseph broke the news to them through the project’s translator, Sophyroth Sun.

SUN: We all just broke into tears. All the growers cry like a baby, including myself and we closed the farm for the whole entire week. And I told the growers to go home -- take the food, and go home and share it with their friends and family.

COLE: Nearly a year later, a steady rain falls on the same lush rows of bok choy and pigweed, taro and Laotian mint where Sophyroth first learned of Ogonowski’s death. He says being here can still be painful for him. When the farm reopened and it was clear the Cambodians were welcome to continue growing their produce here and selling it at local markets for a small profit, Sophyroth didn’t think he had the heart to join them. 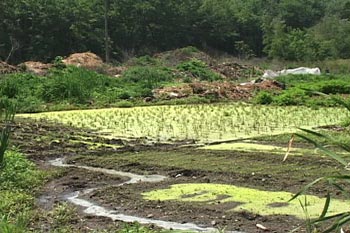 SUN: You know, I just didn’t want to work for this project any more. But after having a few conversations with Peggy, she keeps telling me, keep the project running to honor John. And I was just like, ‘Okay.’

P. OGONOWSKI: Having the Cambodian farmers here is a great source of comfort to me.

COLE: This is Peggy Ogonowski.

P. OGONOWSKI: It was a program that John very much enjoyed being a part of, and we’ve received a lot of help in keeping it ongoing. And I think that it will add to his legacy, that we keep the Cambodian farmers working here and that we’re helping attain more acreage for them, and that the program is growing.

COLE: In the months leading up to September 11, Ogonowski had been trying to preserve 33 acres of land near his farm for the Cambodian growers. Now Congress has appropriated money to make sure that wish is fulfilled. But while the growers will have more places to raise their crops, they won’t have Ogonowski’s expertise to help them do it. Jim Ogonowski, John’s brother, says it’s all he can do to keep the hay business in operation while maintaining his full-time job at the Air National Guard.

J. OGONOWSKI: Well, I’ve tilled the ground for them, I went out and purchased some of the fertilizers and the potting soils that they’d be using to get started. I went out and got that, arranged that to be here for them. But as far as sharing agricultural techniques and stuff like that, I haven’t had that time yet.

COLE: The project has hired a farm manager to give the growers some of the training and technical assistance Ogonowski used to provide. Still, project director Hugh Joseph says it’s not as easy to get things done as it used to be. He says all Ogonowski had been asked to do was to rent some of his land to the Cambodians. But he did so much more. 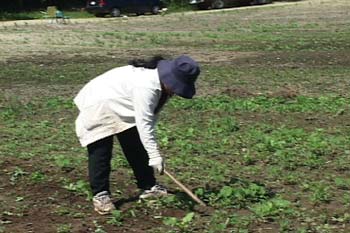 JOSEPH: Providing training and technical assistance to the farmers, or helping to get a shed put up, or putting up irrigation, or getting the greenhouse in order and telling them where to market, you know, all of these little bits of information. Now it’s staff that provides that because he’s not there.

COLE: More than anything else though, what the growers miss is John Ogonowski himself. He would sometimes come by their plots just to joke around, or to pick off the tip of a pea tendril and pop it in his mouth. One of the growers, Visoth Kim, says White Gate Farm can be an unsettling place without John around.

KIM: Every morning I come, ‘Hey, John, how are you?’ This is the good memory. I come I say, ‘Where John around?’ Then after he passed away, then I was just dreaming, just hear like sound or something, ‘Oh, John somewhere?’ He’s a kind guy. We needed him.

COLE: In a way, John Ogonowski’s death has had as much of an impact on the immigrant farming project as his life did. And as long as there are Cambodian growers tilling the soil of Dracut, Massachusetts, he will be remembered. For Living On Earth, I’m Sean Cole.

TOOMEY: To hear a tribute to John Ogonowski we aired shortly after September 11, and to link to all of Living On Earth’s 9/11 related coverage, go to our website, loe.org. Coming up, checking the vital signs of Kuwait’s environment more than a decade after the Gulf War. You’re listening to NPR’s Living On Earth.