A Sturgeon in Sheep's Clothing

It seems like a straightforward story: an environmental group sues the federal government over an endangered species in the Potomac River. But as Anna Solomon-Greenbaum reports, this lawsuit, and the reasons behind it, are more complex than they appear.

CURWOOD: The business of the District of Columbia is primarily concerned with national and international matters. So it can be difficult to find Washingtonians who have time to be occupied with a local environmental problem. There is an effort though to protect the habitat of an endangered fish that once thrived in the Potomac. But, as Living on Earth's Anna Solomon-Greenbaum found out, the story is not really as local as it seems.

LEISCH: This is where it all begins, is right here.

SOLOMON-GREENBAUM: Gordon Leisch stands on a concrete platform at the edge of the Potomac River, just a few miles from the White House. This is the place, he says, where migratory fish come to spawn. It used to be, anyway.

LEISCH: People used to be on these rocks here in the springtime, and the herring were so thick they used a cane pole-- chalk line cane pole with a hook. No bait. Just snagged them and put them in a bucket. 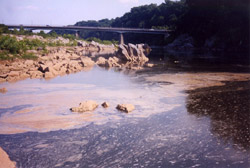 SOLOMON-GREENBAUM: Leisch has fished this river since he was a young boy. He's a former biologist with the Department of Interior and he comes to the river almost every day. He's kept a log that goes back to the 1950's.

SOLOMON-GREENBAUM: To explain the poor fish runs, Leisch points to the hill above us. That's where the District of Columbia's water treatment plant sits. Its run by the federal government's Army Corps of Engineers. The concrete platform we're standing on is one of several outfalls the Army Corps uses to discharge residue back into the river after the water treatment process. Leisch says the fish would come back if the Corps stops dumping the sediment. He's hoping that might happen and he's placing his hope in a lawsuit filed by the National Wilderness Institute.

GORDON: Here you can see some residue left over from a discharge.

SOLOMON-GREENBAUM: That's Rob Gordon, the founder and director of the National Wilderness Institute. He says the Corps dumps about 200,000 tons of solids here each year, and he claims that violates the Endangered Species Act by threatening the habitat of the short-nosed sturgeon. Along with the sludge, he says, come by-products of the water treatment process, like chloramine, an aluminum that can hurt fish and their eggs. Gordon says the government, itself, admits the discharges are a problem.

GORDON: When the permit originally that allows this discharge expired in '93, the EPA was proposing limits that would have required the Corps to construct a solids treatment facility, and then to truck it somewhere and put it in a landfill, just like every other facility does.

SOLOMON-GREENBAUM: But the new permit was never issued, and Gordon says the Army Corps is allowed to go on discharging its sediment because the EPA allows it.

JACOBUS: We're very, very proud to be operating the water plant. and taking care of the solids is just another thing to do.

SOLOMON-GREENBAUM: Tom Jacobus, the man in charge of the Army Corps' treatment facility, shows me where water from the Potomac rushes into the plant. Aluminum sulfate is added here. It acts like a magnet, dragging dirt and other solids to the bottom. The water ends up outside in four giant basins you could easily mistake for swimming pools. Below the surface, Jacobus says, there's 18 feet of sediment.

JACOBUS: Here we're looking at a basin which is ready to be discharged.

SOLOMON-GREENBAUM: When there's enough rain to make the river below run high and fast enough, Jacobus will give the order to open the basin, and the dirt and the aluminum sulfate will be flushed back into the river.

JACOBUS: That sediment has to go somewhere. It is absolutely essential that the sediment be removed from the water to make the drinking water, and there are really only two choices: put it back in the river or put it somewhere else.

SOLOMON-GREENBAUM: And somewhere else, says Jacobus, inevitably means some other environmental and social cost, whether it's building a new treatment facility or trucking the waste to a landfill. Jacobus admits the current operation isn't ideal, but he says a recent study commissioned by the Corps showed stopping the discharges entirely simply isn't necessary.

JACOBUS: That study demonstrated that the continued operation of discharge of the sediment to the river could be done-- there might be some ways to improve it, to do things to lower the concentration levels, to do it over a longer period of time, to look at the threshold limits. And we, as an organization, are open to all those ideas.

SOLOMON-GREENBAUM: The Washington, D.C. chapter of the Sierra Club is no fan of the Army Corps' operation. But spokesman Marchant Wentworth says at least the Corps is forthright about its position. That's not the case, he says, with Rob Gordon and the National Wilderness Institute.

WENTWORTH: We consider this, the Wilderness Institute, a sort of wolf in sheep's clothing kind of story.

SOLOMON-GREENBAUM: Wentworth agrees with Rob Gordon that the Corps should stop discharging solids into the river, but he says NWI's true goal is not to save the short-nosed sturgeon. Instead--

WENTWORTH: We believe that their true intent is to degrade and, actually, cripple the Endangered Species Act.

SOLOMON-GREENBAUM: Wentworth says the Wilderness Institute has used this tactic before. The idea is to point out flaws in the Endangered Species Act by making the government feel the burden of its own regulations. A visit to NWI's website shows most of its press releases criticize environmental regulations and the agencies that create them. The Endangered Species Act is the key target. Rob Gordon has testified before Congress in opposition to the ESA, and he spurred Congressman George Radanovich to hold a hearing on the Army Corps' Potomac operation.

RADANOVICH: I guess our philosophy is that if people in the urban parts of the country had to experience the Endangered Species Act the way people are in the rural part of the country that they would not tolerate that law.

SOLOMON-GREENBAUM: Radanovich, a Republican from California, is one of several Western lawmakers who attack the Endangered Species Act for being unfairly and unevenly applied throughout the country. In the East, they claim, it's rarely enforced. In the West it's over-used. Radanovich tells the story of a water agency in his district that had a levy in need of fixing.

RADANOVICH: But they had to wait six years to get a permit from the Department of Fish and Wildlife because it was the habitat of the elderberry bark beetle. And there was absolutely no proof that that beetle was there, but there were elderberry bushes in there, and they were not allowed to do it. So, finally, after six years they got a permit, but it was too late, because the floods hit a year later, and the levies broke, and three people lost their lives.

SOLOMON-GREENBAUM: Last year, Radanovich introduced a bill to reform the Endangered Species Act. He says he hopes the National Wilderness Institute's lawsuit will force the government to start rethinking how the Act is administered. And so, on the surface, what looks like a local effort to save an endangered fish is actually the centerpiece of a broader agenda.

RADANOVICH: We've been critics of the Act and we have been for the existence of the organization, and we've said there's a lot of serious problem with it that need to be fixed. And we don't shy away or back away from any of those claims.

SOLOMON-GREENBAUM: Rob Gordon of NWI says he talks with farmers and ranchers who say they're afraid to tell the federal government they have an endangered plant or animal on their land. He says the costs and restrictions that come with the Act end up undermining its conservation goals. But Gordon insists reforming the Act isn't his only purpose for filing the lawsuit. What the Army Corps is doing on the Potomac, he says, is just plain wrong.

GORDON: Even if it wasn't hypocritical, we'd still be doing it. If the Washington aqueduct were discharging in Des Moines or Texas or something like that, it would be something we still would oppose.

SOLOMON-GREENBAUM: The EPA expects to issue a new permit for the Army Corps' water treatment plant in February. Agency officials expect they will allow the current discharges to continue with some adjustments. But they warn new regulations to protect the Chesapeake Bay will ultimately mean the Corps will have to stop their discharges and move to an alternate system. In any case, the battle over how the nation's capital treats its drinking water is likely to become part of the national debate over the Endangered Species Act. In this town, nothing's ever truly local. For Living on Earth, I'm Anna Solomon-Greenbaum in Washington.