Very few boy scouts achieve the Eagle Badge honor. We’ll hear how ex-scout Bill Vaughn did it more than three decades after he should have.

CURWOOD: Eagle Scout. It's the highest rank for a Boy Scout, and less than five percent of all Scouts ever achieve it. So imagine how difficult it might be for a 53-year-old man to complete the challenging feats necessary to earn the Eagle badge. Just ask writer Bill Vaughn. He knows.

VAUGHN: This is the way we die. Middle aged man loping around some steamy track trying to prove something. As I lurched into the final lap it felt like some thug was thumping my solar plexus. "You got a problem, Peter Pan? You want to cha-cha?" But this trash talk wasn't coming from some unknown bully. It was coming from the bully I married. "Run faster," Kitty yelled as she ran behind me, checking her stopwatch. It was July Fourth, the final day I'd allowed myself to attempt a seven minute mile and reached out, at last, to grab my dream: the Eagle badge, the highest rank a Boy Scout can earn. 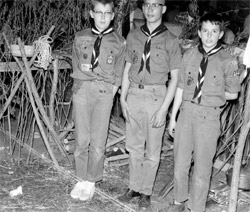 A year earlier, when I came across the most influential book of my childhood, the 1959 Boy Scout Handbook, I got the sort of spiritual jolt Christians get when they see the Shroud of Turin. Ah, there he was on the cover, that red-haired, freckle-faced geek in gators and a full field uniform, striding across a piney ridge, one hand raised in good cheer, the other clutching the Handbook.

By the end of my Scouting days, at age 13, I'd only earned five merit badges, 16 short required for Eagles. Now, as I stared at Doody again, there lifted from my spirit a great rancid aura of regret. I knew what I wanted. I wanted to be an Eagle. The response from Boy Scout Headquarters in Irving, Texas was "No. If you don't get your Eagle by your 18th birthday," officials said, "you can't ever get it." I decided to forge ahead anyway as a virtual Scout. I decided on a one-year deadline. I enlisted virtual counselors to sign my merit badge paperwork and I convinced Kitty to be my virtual Scoutmaster.

I wasn't worried. After all, these tests were designed to challenge an adolescent. Hey, how hard could they be? In a clearing on our Montana ranchette, I piled brush around the bowed trunk of a fallen cottonwood and built a nest inside from leaves. This would be my headquarters for my campaign to show Kitty I deserved the camping and cooking merit badges. I'd eat trout from our river and morel mushrooms from our swamps, washed down with tea brewed from chamomile I picked myself.

I intended to overachieve on these badges because my struggles with Scouting in the past 11 months had humbled me. Dog care, for example: Radish ran off, after I urged him to stay, and peed on our vet's truck when I told him to sit. "I'll pass you," the vet said, "but you ought to consider obedience school."

Kitty signed off on my Camping badge but it was crucial now that I caught a fish. So I waded into our river and cast forth a line. My test for cooking was scheduled for dinner and I had nothing to cook except a few mushrooms and a handful of rice, and the fish weren't biting. Hours later at dinner, I poured Kitty another beer. "How's your trout?" I asked. "What fly did you catch him on?" "A Jackson," I mumbled, "and a Hamilton." She put down her fork. "You bought these fish?" "Hey, the requirements say to cook food. It doesn't say how to get it."

Months later the woods glowed with Yuletide cheer as we gathered around the family's Christmas bonfire for singing and speeches. I was glowing, as well, and not just because of that industrial strength martini at dinner. Yes, I'd earned my 16 badges, including Lifesaving and Nature, and, just in the nick of time, Personal Fitness. In the circle stood several virtual counselors, and they were glowing, too. Kitty lauded my true grit and welcomed a new Eagle into the world. Then she pinned a gold Eagle earring to my crisp new Boy Scout khaki.

"Instead of carols," I suggested, "how about a few camp songs instead?" First, I led a lackluster rendition of "Home On the Range." Halfway through "Waltzing Matilda," slackers drifted away. Finally, alone at last, I sang the "Scout Vespers:"

"Softly falls the light of day
While our campfire fades away,
Have I done and I have I dared
Everything to be prepared?"

CURWOOD: Virtual Eagle Scout Bill Vaughn is a contributing editor to Outside Magazine. That's where his Eagle Scout essay first appeared, and you can read it on our website at www.loe.org.