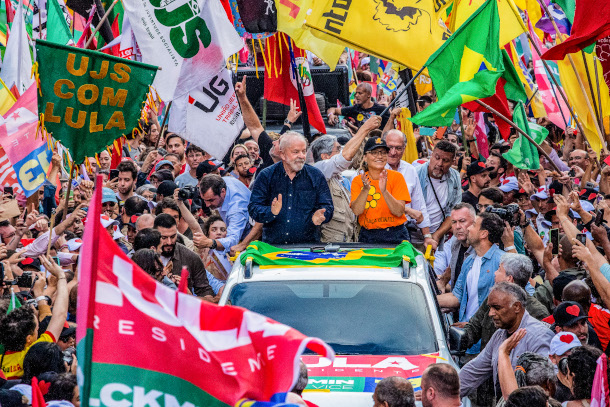 Luiz Inácio Lula da Silva, known as Lula, is headed back to another term in the Brazilian Presidency. In sharp contrast to defeated incumbent Jair Bolsonaro, Lula has pledged to protect the Brazilian Amazon and indigenous communities from illegal mining, agriculture and land grabbing. Karla Mendes, and contributing editor to Mongabay joined Host Bobby Bascomb to discuss.

Brazil has elected a new president. Luiz Inacio Lula da Silva, commonly known as Lula, won a tight run-off election against right wing incumbent Jair Bolsonaro. Lula’s new government is expected to have a profoundly different approach towards indigenous rights and protecting the Brazilian Amazon. This is Lula’s third term as president, he served from 2003 to 2010 and in that time enacted policies that resulted in an 80 percent drop in deforestation rates in the Amazon. In his acceptance speech Lula says he is once again going to prove that it’s possible to generate wealth without destroying the environment.

BASCOMB: Jair Bolsonaro, in contrast, slashed budgets for environmental agencies and encouraged miners and agriculturalists to illegally push into the Amazon, which led to a roughly 70 percent increase in deforestation over his four years in office. And Mr. Bolsonaro gutted FUNAI, that’s the government agency that oversees Indigenous affairs. It helps tribal peoples protect their land from invaders and officially recognize, or demarcate, indigenous territory. For more I’m joined now by Karla Mendes, an environmental journalist and contributing editor to Mongabay. Karla, welcome back to Living on Earth!

MENDES: Hey Bobby, thank you so much for the opportunity to be here again.

BASCOMB: So Karla, what changes are you expecting with the new president?

MENDES: Now, as Lula won the election, we are hopeful that all this will be reversed. Because FUNAI, for example, this change was through a decree. So Lula has the power to revoke it. So it can be an immediate change. At the same time, Lula promised to give FUNAI to be led by an indigenous person, which is really important because the actual head of FUNAI is aligned with Bolsonaro's anti-indigenous measures. So and at the same time, Lula also promised to create a ministry of Indigenous, an Indigenous Ministry. So this will also be key to try to reverse all the losses of rights and threats and violence that they've been suffering due to all this economic interest that have been authorized by the president over their lands. 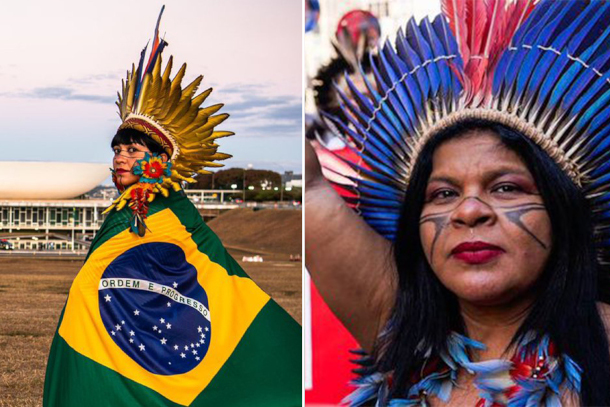 Indigenous activists Célia Xakriabá (left) and Sônia Guajajara (right) were elected as federal deputies. They are part of the Bancada do Cocar (Feathered Headdress Caucus) that aims to halt the escalating anti-Indigenous and anti-environmental agenda in legislative power since President Jair Bolsonaro took office in January 2019. (Photo: Courtesy of Célia Xakriabá and Sônia Guajajara.)

BASCOMB: Now understand that five indigenous candidates were elected to Brazil's national congress. That's the highest number in the country's history. But the Congress is still solidly conservative and aligned with President Bolsonaro's policies. What does this mean for Brazilian politics going forward?

MENDES: Yeah, thanks for the question, that's an interesting point for us to explore. Because the National Congress may be the toughest battle. We saw in this election, Bolsonaro's allies being reelected, like almost 60% of them reelected. Right wing candidates control more than a third of the lower house of the Congress. And in the Senate, the situation is even worse, because the Senate so far was where they blocked the worst attacks against the environment. And now Bolsonaro's supporters control like half of the Senate. But at the same time, we had this historical election of Indigenous people and beyond the Indigenous people, there are the left wing linkage to the Quilombola movement which are the descendants of Afro Brazilian slaves, runaway slaves, LGBT. So all of them, this alliance between them, it's really important. So having all this people and women, so great to see women, more women in the Congress, I think we can be positive. 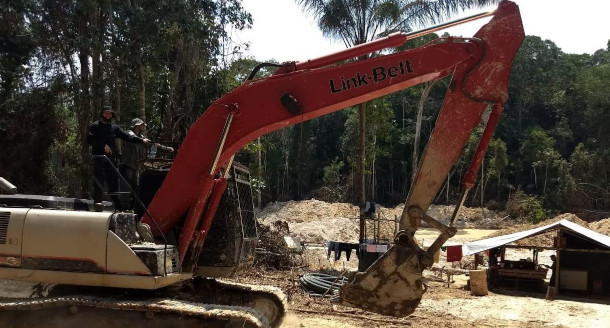 Heavy equipment found at an illegal mining site in the Amazon during Operation Green Brazil, a 2019 government-led initiative to combat fires and environmental crimes. Environmental and Indigenous organizations fear illegal mining will increase if a slate of proposed bills is passed. (Photo: Courtesy of Agência Brasil)

MENDES: Yeah, now that's true. That's true. There are several scientific studies proven this. And I can tell from my experience going on the ground, we can see how the area preserved and the temperature is different with the trees and all that around. The vast majority of the indigenous people, they really fight for the environment, they fight for the world, for the planet. And they need to be there. They just, they think about not just about them, they're thinking about the planet and the world because the Amazon is here in Brazil and in other countries, but it has an effect in the entire world. So that's why it's so important to demarcate the land.

BASCOMB: Another threat in the Amazon is some of the chemicals that can be used in agriculture there. You've written about an agrochemical bill that's been dubbed the agenda of death, that would allow agricultural chemicals in the Amazon that had previously been illegal. Now, that's still working through Congress, as I understand it, but it has quite a lot of support there. Can you tell us more about those chemicals in question and what's likely to happen with this change of government?

Deforestation in Brazil's Amazon rainforest hit a 15-year high in 2021 as Bolsonaro's administration continued to weaken government bodies responsible for monitoring the environment and enforcing laws to protect the forest. https://t.co/QfoUeYm0Qs

MENDES: Yeah, agrochemicals and pesticides are also a really huge problem for the Amazon and for the Brazilian biomes. And we had this, we call this death package that includes a bill that losing regulation for the use of agrochemicals for agriculture. Because now they have to be approved under the Ministry of Agriculture and also through the Ministry of Health. And what they want is to remove the Ministry of Health and just give all the power to the Ministry of Agriculture, so it's not good at all. During Bolsonaro government, we saw a huge increase of pesticides to be authorized to be used in agriculture. And the pesticides, the effect of the pesticides on the traditional community for people who live in the areas where it's being produced, the effects are really, really terrible. Last year, I published a story about the water contamination by pesticides using palm oil crops, and we saw studies showing that the rivers inside Indigenous territories and also the even the water wells they were using, had traces of pesticides.

BASCOMB: So if this death agenda, as it's been called, does pass through Congress. Does the President have the right to veto it as we do here in the United States?

MENDES: Yes. There’s alternative and to be vetoed by the President. And there is also the option of challenging that law before courts.

BASCOMB: Well, there's also talk of reinstating the Amazon Fund. Now that's a pot of money donated mostly by Norway and Germany to protect the Amazon. The fund was halted under Mr. Bolsonaro as deforestation increased, but now the Lula administration has the opportunity to revive the fund. Where does he stand on that?

Indigenous leaders Agnaldo Franciso, left, of the Pataxó Hãhãhãe people, and Cleonice Pankararu, right, of the Pankararu/Pataxó. They told reporters about the persecution they faced under the Bolsonaro administration and how they will continue to fight against proposed legislation that threatens their lands and communities. (Photo: Courtesy of the Indigenist Missionary Council (CIMI))

MENDES: This is really, really great news. And I think that's the first real impact of Lula's election, because there was a lot of discussions, a lot of promise, but what can really be made. And here was an example that because it happened during the first years of Bolsonaro government, there were fires, and he denying the data and deforestation and all this so what other countries that help and send money to Brazil to help protect in the Amazon what they did, they blocked the money. And as soon as Lula was elected, there was his announcement. And it's really timely because one of the key issues that we've been facing during these years are budget cuts to environmental agents and also lack of funding to bolster projects for communities in the Amazon, because of course this community live there, they need to survive. But there are several ways to co-live with the forest and I've visited several projects where I see that. They help protect the harvest on the forest, but they protect the forest itself and also against invaders. So having this money back to this fund is really, really great news.

BASCOMB: Karla Mendes is an environmental journalist and contributing editor to Mongabay. Karla, thanks so much for your time again today.

MENDES: Thank you so much for the opportunity to be here again.


The Washington Post | “Lula Vowed to Safeguard the Amazon. After Bolsonaro, It Won’t Be Easy”