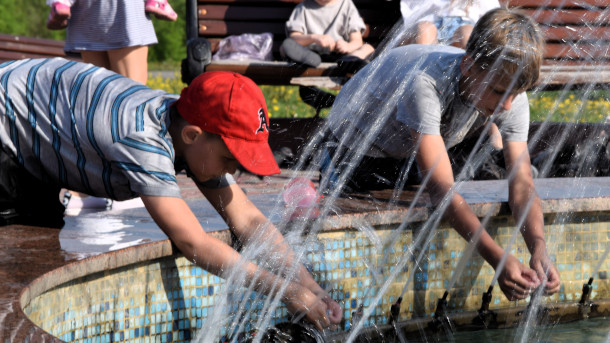 Children and adolescents are facing increasing health risks from extreme heat, and a new study looked at heat and pediatric emergency department visits and found that black and brown children are especially impacted. Pediatrician Aaron Bernstein, who is the interim director of the Center for Climate, Health and the Global Environment at Harvard and lead author in this study, joins Host Steve Curwood to discuss the implications of the research.

Over the past three decades excessive heat has been the number one weather killer in the US. And in Europe some 35,000 people died during a blistering heatwave in 2003, mostly the elderly. And as the climate warms, infants, children and adolescents are also facing increasing health risks, according to new research. Fortunately, children rarely die during heat waves, but scientists found emergency department visits for children at 47 US hospitals went up almost 12 percent during the warmest months of the years studied. The research was published in the journal Environmental Health Perspectives, and its lead author is Pediatrician Aaron Bernstein. Dr. Bernstein is the interim director of the Center for Climate, Health and the Global Environment at Harvard, and he joins us now. Welcome back to Living on Earth!

BERNSTEIN: Great to be with you again, Steve.

CURWOOD: So what sorts of health issues were observed in your study? In other words, what's the primary reason for the emergency department visits?

BERNSTEIN: Some of the things we saw were entirely unsurprising. Heat-related illnesses, what we call heat exhaustion, heatstroke, go up with heat. And the hotter it gets, the more likely those visits are. But a lot of the other things might not be immediately obvious. And one good example of that are certain kinds of bacterial infections. So we saw greater visits for bacterial intestinal infections.

BERNSTEIN: Yeah, so these are bacteria that often are on food, spoiled food, that cause diarrhea and vomiting. And you can imagine that in warmer months, people are more likely to have a picnic, let food spoil, you know, you don't fully cook the hamburger on the grill. And we also know that warmer temperatures promote bacterial growth. Now, one of the things that is important to note here is that we see stark differences in rates of visits based upon whether a child had private insurance or public insurance and whether they were a white child or a racial or ethnic minority child. And those differences reflect what we know, which is that many children who are either on public insurance or of a minority status are more likely to use an emergency department in general, because they lack access to the primary care offices and other resources that might prevent them from being seen. So we saw that with the bacterial intestinal infections, we saw it, in fact, in many other of the conditions that we saw increased rates for including things like, you know, ear infections and skin infections. Interestingly, we also find that, you know, injuries and poisonings are more likely with higher temperatures as well. So we find a suite of effects. And often we see greater rates of visits for minority children.

CURWOOD: Which illnesses were you most surprised to see show up in your study of the heat effects on children?

I spoke to @WinstonC_S @nytimes about the potential lifelong impacts climate change can have on our kids' health: https://t.co/Nca4TquIJW

BERNSTEIN: The one that surprised me the most was that we saw increased rates of visits for blood and immune system disorders. That's a pretty broad group of conditions you some of them are things like anemia, so not having enough red blood cells. That includes things like immunodeficiencies. Heat isn't causing immunodeficiencies. But children with immunodeficiencies are probably more at risk for those same infections we were talking about before. But this is a finding that I think really warrants some further investigation, because I have a pretty good mind as to how we would see more ear infections or more bacterial intestine infections, more skin infections, more accidents, you know, greater visits for children with diabetes, but I'm not sure I really understand this piece. And if it turns out that there is some way in which heat is affecting risk for those children, that would be something that I think is potentially new and concerning. So I think that was perhaps among the more surprising findings for me.

CURWOOD: Now what about mental and behavioral health?

BERNSTEIN: So if you look at the whole population of children in our study, we didn't see a significant effect of heat on those conditions, although it's very close. But when we divided the group of kids into white children and children of minority status, there is an effect and a substantial one. And the children who are you know, Latino, Black American, Asian American, etc, are much more likely to show up in emergency departments for those problems. Do I think that's because white children aren't getting those effects from the heat? No, I think it's because white children have better access to care. And this is what I mean when I talk about the effects of heat amplifying the inequities we see.

CURWOOD: So Ari, What should parents and other caretakers of young people think about when it comes to heat? BERNSTEIN: Well, I think the first is, is that when it gets warm outside, you should definitely, if you can, have your child playing outside. This is not a study to say, let's be worried about the heat generically. This is a study that tells us that, you know, heat does matter to children, it especially matters to children with certain chronic medical problems. And that, you know, with that knowledge, we can do stuff to make sure that our children can play outside when it's hot out, safely. And a good question of a parent is, well, what is too hot? And the answer is, well, it depends on where you live, because 80 degrees in Boston is not 80 degrees in San Antonio. What really matters is the percentile of temperature. How hot is today as compared to the usual? And fortunately there are more resources that are coming online to give parents and providers that information. We're starting to see heat forecasts that tell you, you know, this day is going to be in the 85th percentile of temperature, which is a signal to those people who are at risk, you should be mindful of those heat concerns, maybe offset your activities, maybe make sure you're well hydrated, or whatever the reasonable action is.

CURWOOD: So what can your study teach us about ways to provide better health care access to children and teens?

BERNSTEIN: Yeah, well, the first thing is it underscores a whole body of work that says we absolutely need to provide better health care to the least fortunate children in our country. I mean, children on public insurance uniformly have higher rates of ED visitation, that reflects the broader trend that those children do not have access to primary care. The reasons they often do not are because of insurance. And that in many places, many providers do not take public insurance and/or that those children are maybe more likely to move and move from one place to another and having established primary care is harder. But you know, if we had access to health care for any child, the barriers to access are much less and that makes it so that whatever conditions the child may have, that may put them at risk for heat-related illness are addressed. It means that if a parent is concerned, they can call that office, get some guidance before the kid lands up in an emergency department. And I think that's one of the key messages that we see in this study about what it means more broadly for the health care system.

CURWOOD: Aaron Bernstein's a pediatrician and Interim Chair of the Center for Climate Health and the Global Environment at the Harvard T.H. Chan School of Public Health. Dr. Bernstein, thanks so much for taking the time with us today.

BERNSTEIN: Nice to be with you as always, Steve.