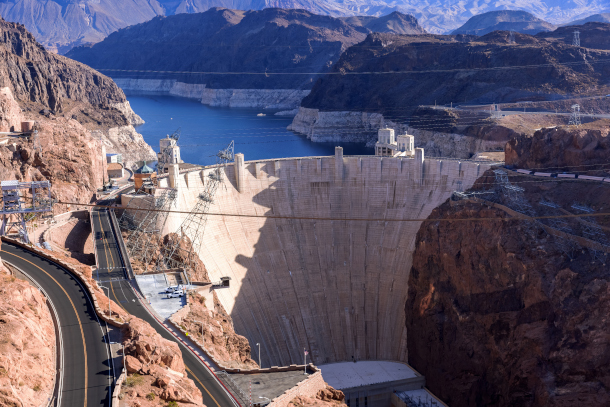 This week, Environmental Health News Editor Peter Dykstra and Host Bobby Bascomb dive into how the global supply chain disruptions could create herbicide shortages in 2022 and discuss the benefits of growing crops under solar panels. And from the history books, they look back to 1936 when the first electric turbines at the Hoover Dam went into service.

And it's time for a trip now Beyond the Headlines with Peter Dykstra. Peter's an editor with Environmental Health News. That's ehn.org and dailyclimate.org. Hey there, Peter, what do you have for us today?

DYKSTRA: Well, hi Bobby, if you're a farmer, or if you're in the big ag sector, you're already thinking about the 2022 growing season. And there's growing concern that an herbicide shortage for 2022, according to researchers from Purdue University. Glyphosate is a part of the subject. There's a big glyphosate production plant in Louisiana that was damaged by Hurricane Ida. There are shortages in workers on the docks and truckers throughout the country that affect the supply chain. The same supply chain issues, we hear about just about everything, are going to affect herbicides, and therefore affect what's available to eat next year.

BASCOMB: Yeah, the supply chain problem it really hits so many different facets of our economy and lives. From what I've read too a lot of the glyphosate, these herbicides are manufactured in China, which is a real bottleneck for manufacturing and getting things out to the world.

DYKSTRA: Right. The key components are manufactured elsewhere, including China, that's a part of that big global supply chain that's about to turn around and bite us in a big way. If it's not already. We hear a lot of talk on the news about Christmas season and Christmas gifts being affected. After that comes the farming and food season throughout the country, and the way farming is set up these days, there's so much reliance on herbicides like glyphosate. Many people know it as Roundup. That's also under a lot of pressure right now from lawsuits, primarily, from farm workers and others who think that they've been damaged by exposure to glyphosate.

BASCOMB: Alright, well, what else do you have for us this week, Peter?

DYKSTRA: Here's a good idea. There are some if's attached to it, and we'll get into the if's. But how about growing some crops under solar panels. In Colorado, Wired Magazine, visited a small farm, 24 acres, they grow things like beets, and tomatoes, and they grow them on four of those acres under solar panels. So not only are you providing food, but you're generating a source of sellable electricity, and the two actually can work pretty well in tandem. 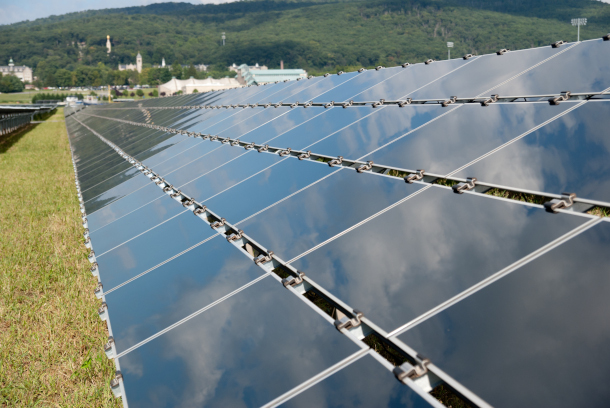 One farm in Colorado is growing plants under solar panels. (Photo: Maryland GovPics, Flickr, CC BY 2.0)

BASCOMB: Well, that sounds like a great idea. But don't those plants need a lot of sun to grow well?

DYKSTRA: Many plants can grow well with the sun that comes through the solar panels. Not only that, but a lot of plants need sun, but they also, in most cases, need some shade. So, the solar panels can protect that, and when those plants are shadier and cooler, they, in some cases, need a lot less water to thrive and the solar panels, providing shade can help with that as well.

BASCOMB: Well, it sounds like a win-win. I mean, you have healthier plants, save water, generate income for the farmers, who you know, maybe selling electricity or at least saving on their own electricity bill and generating renewable energy. It sounds like a great idea.

DYKSTRA: It's a win-win, if there's enough money for farmers to make that heavy front ends investment in the solar panels.

BASCOMB: Well, that's certainly true. And what do you have for us from the history books this week.

DYKSTRA: October 26, 1936, the first electric turbines at the Hoover Dam and the Colorado River goes into service. That massive dam, not far from Las Vegas, provides not only water for drinking, water for crops, but hydro power in much of the southwestern US. And of course, California and Arizona are the sources of many of the crops grown and consumed in the US.

BASCOMB: Well, hydropower, though it has its limitations. I mean, it does wreak havoc on the rivers upstream. And of course, now you know, the Lake Mead behind the Hoover Dam is at its lowest level since the dam was created. That can't be very good for generating hydroelectric power.

DYKSTRA: Yeah, it's also a problem at the Glen Canyon Dam upstream in the Colorado on near Lake Powell, another big artificial lake. But think back to 1936. No one could have imagined that there'd be upwards of 40 million people in Southern California, Arizona, Southern Nevada. And one of my favorite markers for this, 1936, there were six National Hockey League teams in North America. Now there are four in the desert, in Phoenix and Las Vegas. Who to think in 1936 that was completely out of our minds. As is the huge population growth that not only has happened but is projected to continue even though the region is running out of water.

BASCOMB: Yeah, I'm sure the engineers who developed the Hoover Dam never could have imagined, you know, millions of people living in the desert and of course, climate change, which is making the you know, making the hydrology a lot more challenging.

DYKSTRA: Right, and living in the desert also means you've become reliant on electricity, which for all intents and purposes also didn't exist in 1936, in the form of air conditioning.

BASCOMB: All right, well thanks, Peter. Peter Dykstra is an editor with Environmental Health News. That's ehn.org and dailyclimate.org. We'll talk to you again real soon.

BASCOMB: And there's more on these stories on the Living on Earth website. That's loe.org.


Learn more about the herbicide shortage

Learn more about the Hoover Dam