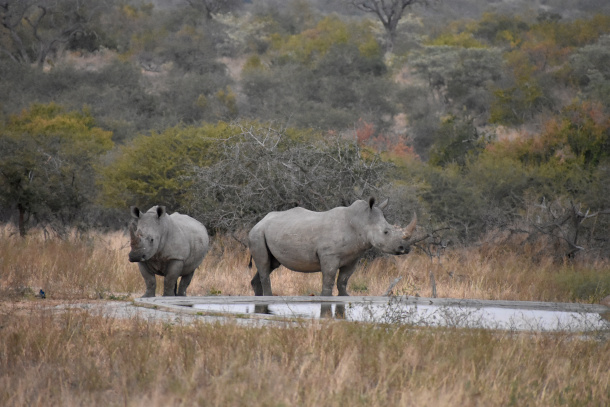 More than 80 percent of the world's African rhino population lives in South Africa, making the country the epicenter of the rhino poaching world. Though the number of rhinos killed has steadily decreased since 2014, the coronavirus pandemic has brought a major drop in poaching. Jo Shaw, Senior Manager and African Rhino Lead for the World Wildlife Fund, talks rhino poaching during the lockdown with Living on Earth's Bobby Bascomb.

CURWOOD: More than 80 percent of the African rhinos remaining in the world are in South Africa, making it the hotspot for rhino poaching. The numbers of rhinos killed for their horns has been slowly declining over recent years but the COVID-19 pandemic, and a strict lockdown by the South African government, has quelled rhino poaching even more. Jo Shaw, Senior Manager and African Rhino Lead for the World Wildlife Fund spoke with Living on Earth’s Bobby Bascomb.

BASCOMB: Jo, what were the statistics and the numbers of rhinos poached in South Africa before and after the Coronavirus began?

SHAW: So, Bobby, as you know, rhino poaching has been a major problem in South Africa for the last decade, probably peaking around 2014 when we were losing around three rhinos a day. There has been quite a gradual decline since then, to a total of 594 animals killed in 2019. But since the COVID pandemic and the major lockdown that's been put in place in South Africa, we've seen a dramatic decline in the rates of Rhino poaching since lockdown commenced. The Minister of the Environment, Forestry and Fisheries stated that April 2020, in Kruger National Park, which is home to the majority of rhinos in South Africa, only five rhinos were poached during April 2020 compared to 46, a year previously in April 2019.

BASCOMB: And why do you think that is?

SHAW: It's something we're digging into to try and understand better. I mean, I think there are probably, as always, with this complex problem, a number of different explanations at different layers. So, all of the parks have been closed. Gates are shut, lodges are shut. There's nobody coming into the parks, but the rangers themselves are essential services, so they're able to continue to do their jobs. And South Africa itself has had a very restrictive lockdown process. So, people have been confined to their homes, only more recently able to get out once a day to exercise. On top of that movement between provinces has been restricted, and even international flights have been closed. So there's very little opportunity for people or rhino horn products to be trafficked. 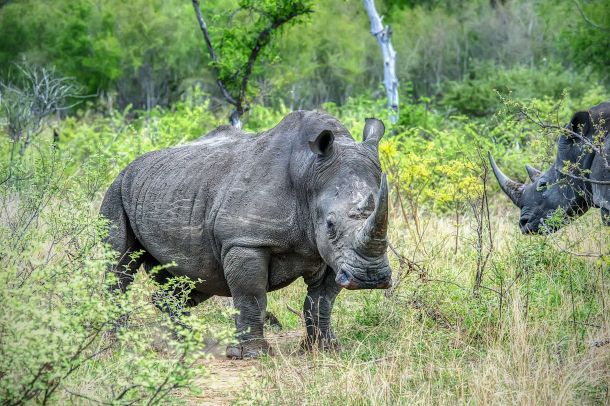 It’s speculated that the decline in rhino poaching numbers are impacted by the shutdown of international travel, making it harder to traffic the rhino horn to buyers. (Photo: Brook Ward, Flickr, CC BY-NC 2.0)

BASCOMB: So do you attribute then a lot of the drop in rhino poaching to a lack of demand? I mean, if they can't get the product out of the country to markets in Asia, I mean, what point is there? Is that sort of what you're thinking?

SHAW: Yes, it does seem as though there's been some breakage in the chain at some point. The Minister of the Environment released a statement in which she announced this very dramatic decline, and even suggested that perhaps the fact that in some of the larger parks like Kruger National Park, people had been using tourist entry gates to access the parks and to be able to go in and drop poachers off to kill rhinos. And perhaps the closure of these gates and the dramatic decrease in access into the parks had also just prevented people from being able to get into the park to poach rhinos.

BASCOMB: But of course poachers, by definition are already breaking the law. So I would think, you know, that they wouldn't worry so much about breaking the lockdown laws to continue the slaughter.

SHAW: Yes, there does seem to be this logistical blockage that somewhere down the line has made the system much harder to operate. The challenge now is to try and understand what is that weak link in the chain that's made such a big difference? And is there a way we can come up with to try and keep these numbers so low, even as lockdown restrictions are lifted. I think it's worth flagging that there is, of course a negative aspects to this closure of Parks and Tourism activities. In South Africa, tourism revenue is responsible for most of the operating budget of our parks in terms of protection, animal monitoring, animal management. And so without the income coming from tourists paying gate fees or paying for accommodation or game drives, our parks are seeing a really major decline, a huge loss of revenue that would normally be used to pay for the operating costs going forward. So I think this is something to be very concerned about in parallel.

BASCOMB: So, the trick then is to find a way to balance that. I mean, it's great for the poaching numbers. But obviously you need the revenue still, to keep the parks open in the future. 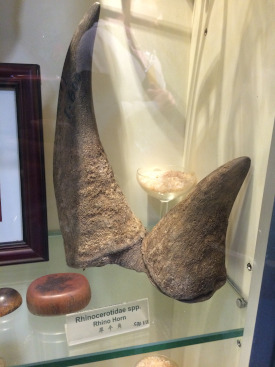 SHAW: Yes, absolutely. Obviously, it's not the right solution for anybody for lots of reasons to maintain this very restrictive lockdown for a long period. I think what's going to be the challenge for all of us is to try and identify what are these narrow links in the chain where we've been able to stop the movement of rhino horn, and see if there's a way that we can replicate that without continuing to enforce a major lockdown.

BASCOMB: You know, it's easy to imagine the relationship between the pandemic and poaching going a totally different direction, you know, with no tourists around to deter the poachers. They could become more emboldened. And, of course, people can get really desperate when they suddenly can't go to work and support their families. How surprised were you, if at all, by the way this turned out?

SHAW: Yeah, I mean, this is definitely an unintended consequence of lockdown, obviously that we're, we're grateful for and as I say, trying to work on ways to continue post-lockdown. I think one of the other interesting pieces of information in the minister's recent release is the fact that bushmeat poaching, so snaring for meat within the parks also hasn't increased in the way that one might expect as people's livelihoods become less secure and jobs are lost. And in parallel with this challenge I've described going forward about the loss of operating budgets for parks. We need to be thinking about the people who live around them and the possible impacts of the loss of jobs due to the closure of nature based tourism businesses, and try and look for ways not just to diversify funding sources and funding income for parks, but diversify opportunities and make sure food security plans are in place for people who live in these areas? 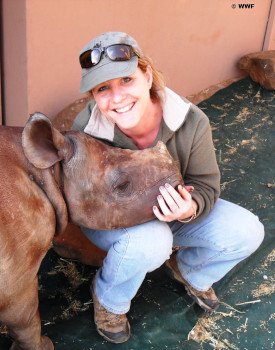 BASCOMB: Well, that's the thing. It's not like, you know, the pandemic, let's say it's over tomorrow and things go back to normal immediately the next day. I mean, this is going to persist for a long, long time, the knockoff effects, the economic effects of the pandemic.

SHAW: Yes, I think the broader economic effects will be challenging for rhinos, and for conservation more broadly, for really quite a long time to come. It could take months, if not years for tourism to reach the levels that it was operating at previously. And without that money, we need to find other ways to fund our protected areas in Africa, but, but also in Asia, in the States, around the world. I think it's a big challenge for everybody to be considering.

A statement from South Africa’s Department of Environment, Forestry, and Fisheries on the decline of rhino poaching in 2019