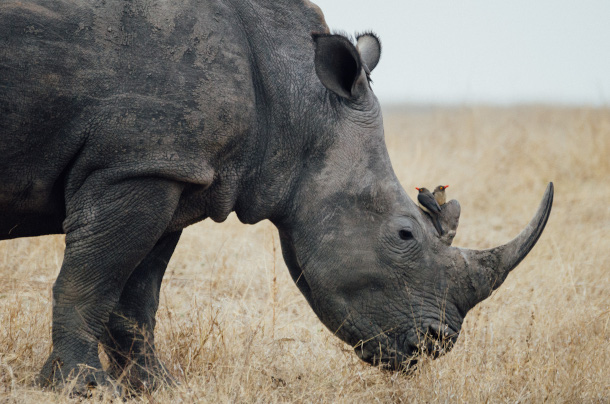 Oxpecker birds are known for riding on the backs of large mammals, feeding on the ticks and parasites that would otherwise plague their hoofed companions. Now, research indicates that oxpeckers may also help rhinos by acting as an early-warning system when they sense danger. Living on Earth's Don Lyman has the story.

LYMAN: Red-billed oxpeckers are a species of bird that lives in the African bush. These eight-inch-long brown birds with distinctive red bills and yellow-ringed red eyes can often be seen riding on the backs of large mammals, including giraffes, Cape buffalo, and endangered rhinos, where they feed on ticks and other parasites on the animals’ hides.

But new research reveals that the oxpeckers’ symbiotic services extend beyond parasite removal. Rhinos have very poor vision but oxpeckers can see exceptionally well and issue a shrill alarm call which can warn the rhinos of potential danger.
Researchers in the study approached 11 black rhinos by foot on the open plain on 86 occasions. They found that rhinos with a red-billed oxpecker on their backs were much better at detecting the researchers’ presence than those without an oxpecker. 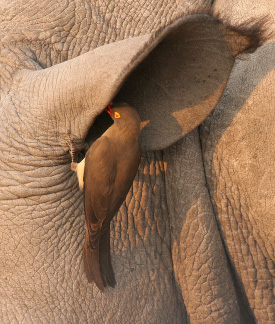 All the rhinos they observed responded to the oxpeckers’ alarm calls by becoming more vigilant — they stood up if they had been resting — and turned to face downwind. Then the rhinos either ran away or walked downwind to investigate the potential danger.
Black rhinos where at one time the most numerous species of rhino in the world, but poaching for traditional Chinese medicine has resulted in black rhinos becoming critically endangered. Only an estimated 5,500 black rhinos remain in the wild.

Red-billed oxpeckers numbers have declined as well because of pesticides used to kill parasites on domestic cattle, which the oxpeckers also feed off of.

The researchers said that oxpeckers may help rhinos evade poachers, but one wildlife biologist cautioned that a lot of poaching takes place at night when the oxpeckers would be sleeping and not able to alert the rhinos to approaching danger.