Climate and the 2019 Lexicon 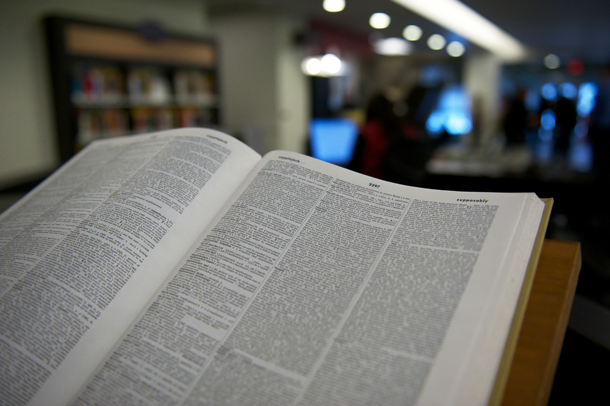 Every year, dictionary publishers select a word or phrase that they call their “word of the year”. They determine this by finding a term that was commonly searched on their websites and speaks to a larger societal theme of that year. (Photo: University of Waterloo Library, Flickr, CC BY-NC 2.0)

As a new year begins some dictionary publishers select a word or phrase that represents the passing year above all others, their 'Word of the Year'. Three prominent dictionaries have selected words of the year for 2019 relating to climate and the environment. Living on Earth's Aynsley O'Neill has more on these words and what they say about these times.

CURWOOD: Well, we are on our way in a new year and a new decade. But Living on Earth’s Aynsley O’Neill takes a look back at the words that defined 2019.

O’NEILL: At the end of the every year dictionary publishers around the world comb through data and statistics to determine a word or phrase that they believe represents that year above all others – their “word” of the year.

They use algorithms to calculate how often people look up a given word on their websites, and then consider whether that word speaks to a broader theme in society.

And for 2019, many of the world’s most prominent dictionaries chose terms relating to climate change.

The Oxford Dictionary declared “climate emergency” as their word of the year.

WOMAN 1: We want governments around the world to declare a climate emergency.

MAN 1: I believe that we have a climate emergency…

MAN 2: To declare an environment and climate emergency…

MAN 3: To declare that we are currently in a climate emergency.

WOMAN 2: The European Parliament has voted to declare a climate emergency…

O’NEILL: Oxford says the term represents a growing public awareness of what the UN Secretary-General has called ‘the defining issue of our time’.

The dictionary’s analysis showed that by September of 2019, the term was more than 100 times as common as it had been the previous year.

And the adjective “climate” placed before the word “emergency” is a relatively new, but steadily growing, trend.

In 2018, according to the Oxford Dictionary, the most commonly searched phrase with the word emergency was health emergency.

But one year later, “climate emergency” was searched for three times as often.

The Oxford dictionary also released a short-list of runner-up words. On it: climate action, climate crisis, and climate denial.

And the Oxford Dictionary isn’t alone.

The term was arguably popularized by Swedish activist Greta Thunberg and her Fridays for the Future movement.

She inspired millions of climate strikers around the world to take time off from school or work and hit the streets to demand action on the climate crisis. 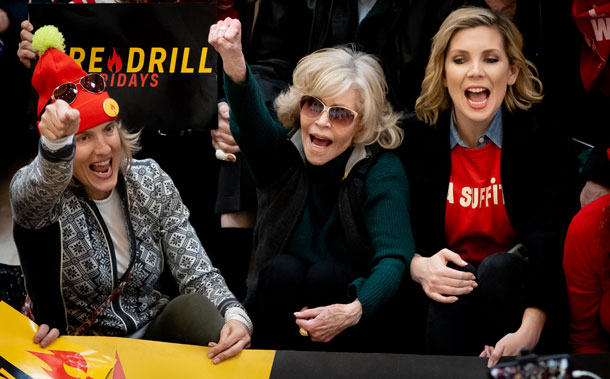 One such climate striker is Hollywood icon and activist, Jane Fonda, she spoke with Living on Earth about how Greta inspired her participation in climate civil disobedience.

FONDA: We decided to have an action every Friday, because that's when Greta Thunberg and the student climate strikers are having it. We've claimed Friday and they have, I asked their permission first, and they welcomed me to their Friday protests.

Its word of the year was “existential”, meaning “of or relating to existence”.

They say that searches for that word jumped 179% following a town hall meeting when Democratic presidential candidate Bernie Sanders used the term in reference to climate change.

SANDERS: This, to me, is an existential crisis that impacts not just you and me and our generation but our kids and our grandchildren, and we must accept the moral responsibility of leaving these kids, future generations, a planet that is healthy and habitable.

O’NEILL: Dictionary dot com said the term “existential” was chosen because it communicated a sense of humanity grappling with its survival.

The word speaks to fear about the climate, yes, but also fear about political instability and threats to our ways of life.

Past words of the year have also touched on environmental themes. As far back as 2007, Oxford Dictionary selected “carbon footprint”, and in 2018, the Collins English Dictionary chose “single-use” to capture the discussion surrounding plastics and pollution.

But now, the decision of three prominent dictionaries to choose environmentally conscious words for 2019 shows a trend of the world paying more attention to the climate crisis.

The Living on Earth crew gave some thought to a word of the year of our own. Among our most-used phrases was the term “climate action”, used dozens of times on our show throughout 2019.

Climate action refers to the steps we must take to avert climate catastrophe.

Together, these words of the year tell us of a growing awareness of our shared vulnerability. In a sentence:

When confronted with the existential threat of the climate emergency, the ever-growing climate strikes show that the world is calling for climate action.