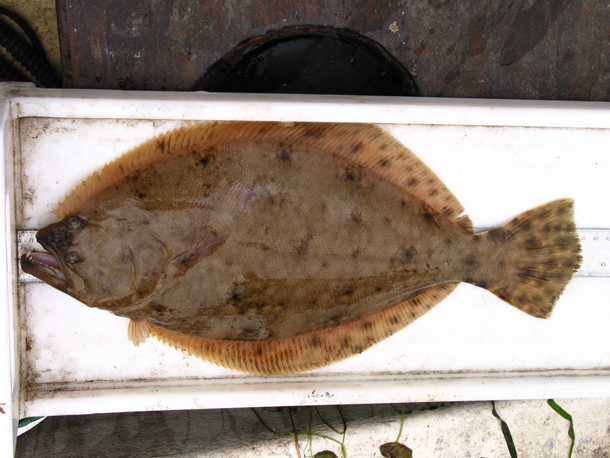 Summer Flounder, one of the species that’s moving north because of warming ocean waters due to climate change. (Photo: FWC Fish and Wildlife Research, Flickr CC BY 2.0)

This week’s trip with Peter Dykstra beyond the headlines leads to the coast of New Jersey where North Carolina fishermen seem to be moving with their catch as fish species head for cooler waters. Then, Peter tells host Steve Curwood about a stalled solar farm in Kentucky and the coal operation linked to the delay. Finally, the pair note the arrival of invasive zebra mussels in the Great Lakes and the retirement of an environmental news legend.

CURWOOD: It’s Living on Earth, I’m Steve Curwood. Let’s check in with Peter Dykstra now – Peter’s an editor with Environmental Health News, that’s EHN.org and DailyClimate.org down there in Atlanta, Georgia. Tell us, what’s going on beyond the headlines?

DYKSTRA: Hi Steve. Greetings from the South where the news is that seafood is moving north, at least in this hemisphere, as a result of warming waters. We’ve heard that lobsters are beginning to vacate Long Island Sound and the shores of Southern New England – it’s having an impact on the industry there. Similar news from Alaska where salmon are not being found in some of the places where they’re traditionally fished.

But here’s one from the East Coast that could result in some serious conflict: there are fish pursued by both commercial and sport fisherman like black sea bass and summer flounder (also known as fluke) that are beginning to vanish and move North from places like North Carolina. North Carolina fisherman, in turn, are showing up off New Jersey where they’re still plentiful (there’s potential for conflict with Jersey fisherman) and those North Carolina fisherman are burning more fuel just to get to their catch.

CURWOOD: Yeah, you know, I don’t think I’d want to mess with a New Jersey fisherman trying to muscle in on his or her territory. Hey, what else do you have for us? 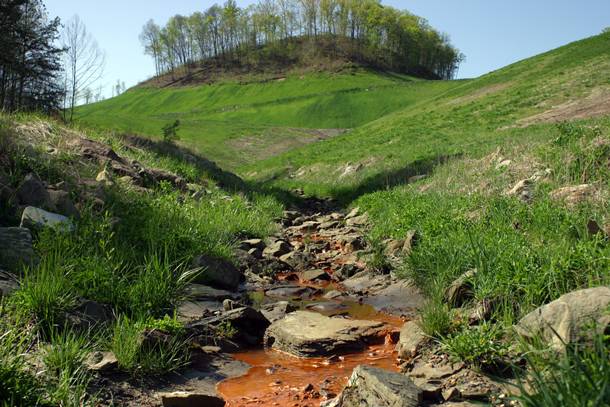 The bright red tint to this runoff from a mountaintop removal reclamation site in Magoffin County, Kentucky indicates the presence of iron and other minerals. (Photo: ilovemountans.org, Flickr CC BY 2.0)

DYKSTRA: Well here’s one that’s a little complicated. The largest solar farm in the state of Kentucky’s history is being stalled by a cleanup, that’s also stalled, of a Mountaintop removal site in Appalachia.

CURWOOD: I can understand that – mountaintop removal is like strip-mining on steroids. They just come in and blow everything up, it makes a heck of a mess. It could take years to clean that up.

DYKSTRA: And when it’s cleaned up it’s not necessary clean and it’s nothing like the previous mountain ecosystem that was there. The site is owned by Kentucky fuel – that’s run by the family of Jim Justice, the governor of the neighboring state of West Virginia. They’ve taken the state of Kentucky to court over the cleanup, saying in order to clean up this site and enable a solar farm to be built next to it, they will have to go dig more coal to make more money to do the cleanup.

CURWOOD: Kentucky fuel … I thought it was Kentucky fried chicken! 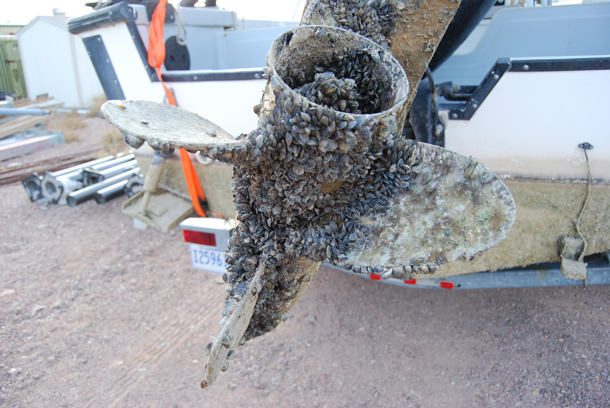 CURWOOD: Oh yeah I guess maybe that’s what’s happening. Alright let’s look in the history vaults now what do you have for us today?

DYKSTRA: Let’s go back to June first, 1988 – also exactly 30 years ago. Zebra mussels were found for the first time in the Great Lakes system. Specifically in Lake St. Claire –that’s the smaller lake between Lake Huron and Lake Erie near the cities of Detroit Michigan, and Windsor, Ontario.

CURWOOD: And Zebra mussels, I mean, they may be tiny but they’re a big problem if like you have a water supply for a city or you have a factory or a power plant. They clog up the intake pipes of those things and they go everywhere.

DYKSTRA: Right, Zebra mussels are native to the Caspian Sea. They of course hitched a ride over here on the hulls of freighters and other ships. They’re a major nuisance species and potentially could affect other areas – not just the great lakes.

CURWOOD: Yeah, they don’t have a natural predator in the Great Lakes.

Hey Peter, before you go, you’ve heard the news about our friend Rocky Barker … he’s retiring!

DYKSTRA: He’s retiring! Rocky is almost a legend among environmental reporters. He’s based in Boise, writes for the Idaho Statesmen. He’s been doing this for a quarter century, been writing in general for longer than that and he leaves behind a huge legacy of reporting on the environment.

CURWOOD: He certainly will be missed but you know, he’s so funny I think we’re still going to be hearing from him.

DYKSTRA: Right, well one of his biggest contributions was to follow up on the recovery of Yellowstone National Park after their catastrophic fire that was also 30 years ago. He wrote a book about the recovery and he had a slide show that he toured around with which he of course called, “the Rocky Barker Picture Show.”

DYKSTRA: Okay Steve thanks a lot, talk to you soon.

CURWOOD: And there’s more on these stories at our website, Loe.org.

Idaho Statesman: “Rocky Barker prepares to retire with an emotional walk through his past, future”