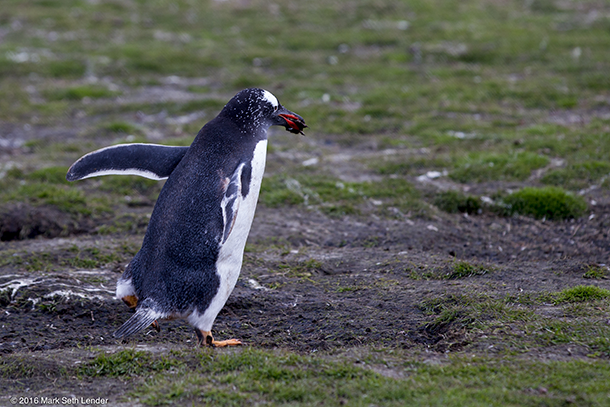 Visiting the Falkland Islands, writer Mark Seth Lender watched Gentoo penguins building nests from mud, the only material available. But one male wanted stickier dirt from a neighboring colony whose members objected. Still, his mate appreciated the mud and him.

CURWOOD: We head north of Antarctica now, for a different penguin in a different land. Gentoo penguins can be found in the Falkland Islands, but it’s a comparatively sparse population, especially early in the breeding season. At a colony on Carcass Island, writer Mark Seth Lender discovered that a penguin’s sense of how much space is enough – and how close is too close – can be unpredictable, even to other penguins.

LENDER: Gentoo Penguin is building his nest from the only thing at hand: Dirt. In chunks. By the beakful. Brown clingy stuff that plasters neatly to the purpose he has in mind. He bends to pick, then carry, then drop at Her penguin feet. And She accepts every small measure. Like a treasure. With bright orange bill she then mills and turns the shape that rises like a hand-built pot. Round and round. Well-contrived. Perfect for their well-laid plans, the seat, the center of things that are to come. 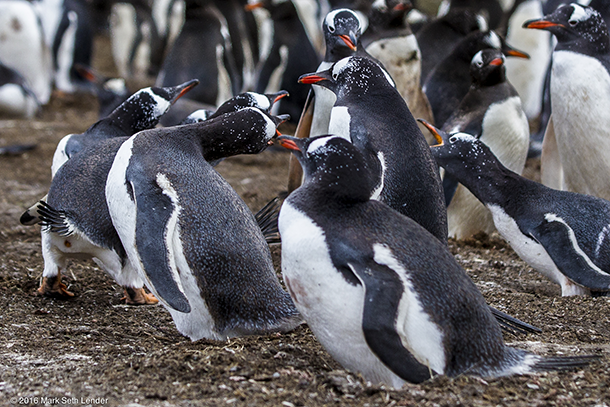 He’s getting away with it. No one tries to stop him. In the Southern Hemisphere it is early days of spring. The clans that make this colony are thin, and widely spaced and at the place he’s stealing from, no one’s home. And Gentoo’s left alone.

Crossing from where the mud is always muddier to his own turf (where there is no turf but only mud), Gentoo makes a wrong turn And every penguin in his very-own penguin’hood tells him, “Penguin, get gone!”

He jumps, from one, to collide, with another. They howl they peck they bat him with the flat of their muscular arms that once were wings. He leaps, he spins! And every penguin person wants a piece of him. 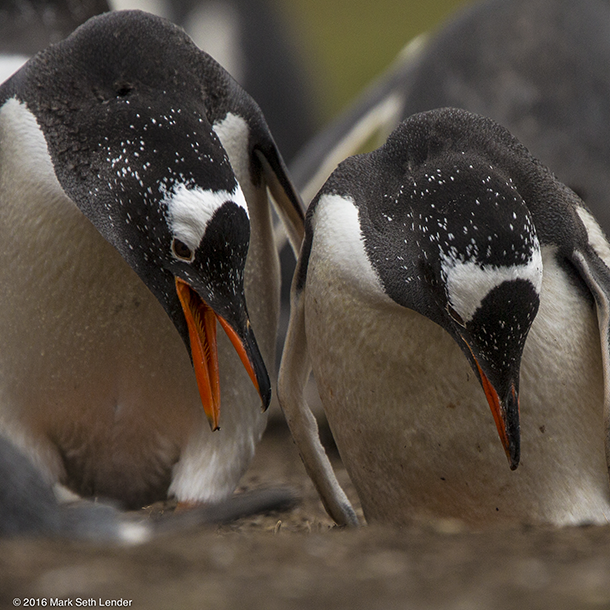 Safe, at last, his reward for all the dirty work he’s done is love. Paired in perfect synchrony, two Gentoo penguins rise and pointing toward the sky they sing.

Bending low they bow, then high, then side to side. And like the mariner he is, (most of his life spent at sea) he plies her broad ship’s keel of a back. She cranes her neck, they clasp, then grasp each other beak-to-beak. And in this ancient perfect circle of a pose they hold. And hold. And hold.

CURWOOD: That’s writer Mark Seth Lender – to check out his photographs of Gentoo penguins in love and war, waddle over to loe dot org.