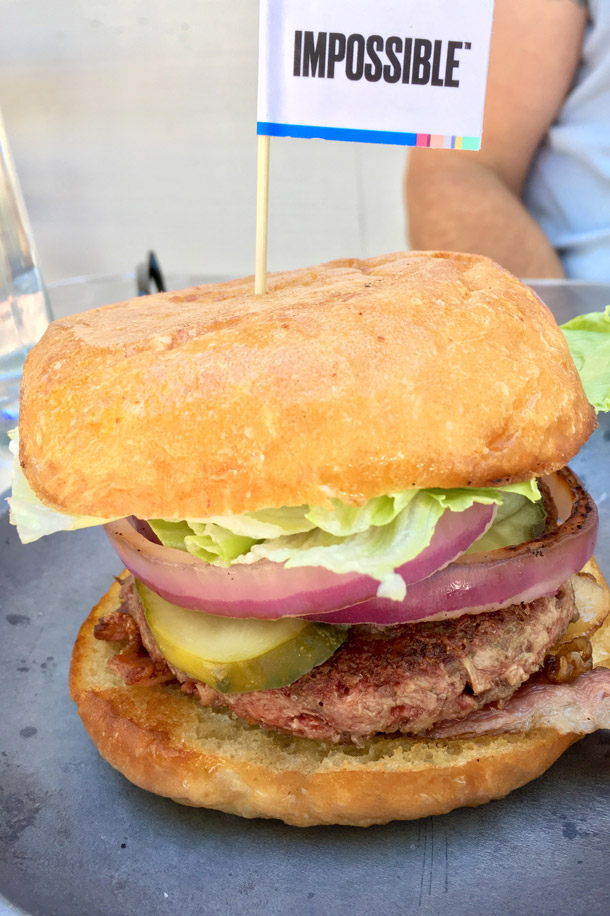 The Impossible Burger is currently available at a few select restaurants around the country. According to Broad, the company is working on a retail plan. (Photo: SharonaGott, Flickr CC BY 2.0)

CURWOOD: The Impossible Burger is just one of many engineered meat alternatives that are becoming increasingly familiar, and a tide of new biotech companies sees new opportunities in the food industry. But despite support from investors like Bill Gates, they have a long way to go before they’re a staple of every kitchen. The key to mainstream success, says food activist and Fordham University Communications professor, Garrett Broad, will be transparency about the ingredients.

BROAD: Thanks so much for having me. Glad to be here.

CURWOOD: So, you can tell me, Garrett. Have you tried the Impossible Burger, and if you did what did you think?

BROAD: I have tried the Impossible Burger. I had it here in New York City at one of the Bare burger franchises, and you know as someone who hasn't eaten meat for about a decade or more, it was an interesting experience for me. I enjoyed it definitely, but I don't think I'm the ideal person to tell you whether it tasted like meat or not ‘cause t's been a long time for me.

CURWOOD: I kind of get the impression that this burger is maybe more for people who are making the transition from eating meat to a more vegetable-based diet, and it gives a chance to have the flavor. What's your thought?

BROAD: Yeah, that really is key to the strategy of companies like Impossible Foods as well as others in this sector. Vegetarians are not their primary market. In fact, in a lot of ways they don't want their products to be associated with vegetarians at all. They're really aiming for those meat reducers. They're aiming for those folks who are maybe looking to switch out a meat option once, twice, three times a week. They want this to be a product that is meat. It's just meat from plants.

CURWOOD: So, Garrett, right now the Impossible Burger couldn't be sold in certain European countries because it contains genetically modified ingredients. Just what is the genetic modification involved in the Impossible Food burger? 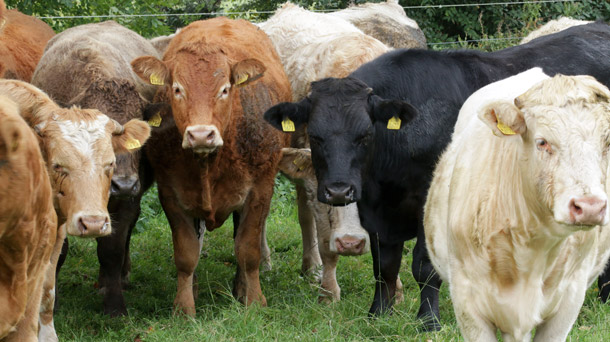 CURWOOD: Now, the Food and Drug Administration, the FDA, has opted not to certify the key plant protein in the Impossible Burger as GRAS, as Generally Recognized As Safe. Tell me, what does that mean and how important is that distinction, do you think?

BROAD: So, the FDA situation with impossible Foods is a little complicated. They haven't said that the hemoglobin ingredient is not safe, but what they have said is that it has not passed their Generally Recognized As Safe requirement as yet. They're looking for more testing from the manufacturer, from Impossible Foods, to meet this, what's called GRAS, requirement. So, when people often hear, “Oh, FDA says this is not Generally Recognized As Safe,” they’re a lot of times thinking, “Oh this must mean they're saying it's unsafe”.

That's not what the FDA is saying. What the FDA is saying is, “We need more testing here to give it this designation”, but I think the history of the FDA and the history of food science and technology suggests we're likely to see these ingredients getting Generally Recognized As Safe designation and even without all these formal designations, being consumed by the public as we consume lots of things that are in these sort of gray areas from the FDA perspective.

CURWOOD: So, how much dough is invested in Impossible Foods and the other meat alternatives generally do you think?

BROAD: Well, "do you think" is the big important part of that question because a lot of the stuff this things that we don't know. Right? These are private companies that keep information about funding pretty tight to the vest. We do know that Impossible Foods had a recent funding round that was in the $75 million dollar range, so they've had a couple hundred million dollars put into them at this point. Other companies in this space like Beyond Meat have gotten, you know, several tens and hundreds of million dollars investment from a variety of venture capitalists, but a lot of the entrepreneurs won't tell us exactly what they're working with.

CURWOOD: So, what are environmental groups and food activists saying about Impossible Foods and the Beyond burger and so forth?

BROAD: I don't think that environmental groups and food activists speak with a unified voice on this topic. There are some who are generally supportive of this development in large part because they recognize the environmental harms that are caused by contemporary animal food production; however, there are certainly some other groups that have raised concerns.

Friends of the Earth is one of the more vocal in this arena, and they are concerned as much about process as they are about product. They have concerns about sort of who is making decisions about what we're going to eat and the transparency in the regulatory process. And, you know, some of these groups have just general skepticism and concern about genetic modification specifically, which they see as potentially environmentally harmful, potentially harmful to human health, but also a lot of their critique is about sort of who controls food, who’s the driving force of our food system. 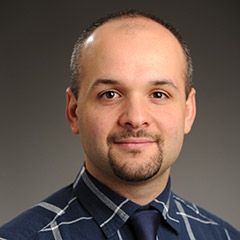 CURWOOD: So, Garrett, my crew was lucky that they got to have an Impossible Burger. I've yet to have one. I did get to try a Beyond burger, and what I want to ask is, how long is it going to take for these plant-based burgers from a biotech company like Impossible Foods to make it beyond the specialty restaurant, beyond the specialty food aisle of, of, right now, I mean, you can get these in upscale grocery stores but not at usually the neighborhood ones.

BROAD: So, we've seen a lot of growth in just a few years. I mean, plant based replacements, remember, have been around a long time, right? We've had veggie burgers, we've had tofu and tempeh, but we've seen those have had a very limited market share right? And so these folks who are doing these plant-based burgers are seeing significant growth over just the last few years, but as you say much of that has been at, you know, upper-end grocery stores or at upper-end restaurants.

Some of that's changing, so Beyond Meat which you've mentioned has a deal with Safeway, and so there are now at some major mass market grocery stores up and down California primarily. You know, you've also seen folks like Richard Branson who's invested some money into kind of the future of food space in general, say things like, you know, in 30 years he doesn't think will be eating “real” quote unquote “real” animal protein at all. I think that's probably an overstatement, but I do think that it's important to remember the way that our conventional meat is in many ways subsidized to keep the cost low. Right?

And so if we paid the full cost of a beef hamburger, taking into consideration all of the costs to environment, to, potentially, health, you know, that couple-dollar burger from McDonald's really costs more. And so that's an argument that these folks make too. If we were able to have a level playing field here, these prices could get to parity even quicker. But there is still a way to go, and I think that's something that, with scale and with time, I think, yeah, something like a quarter of the market in the next 20, 30 years that would be huge going from this very niche space that we're in now.

CURWOOD: Garrett Broad is a Professor of Communications and Media Studies at Fordham University, when he's not cooking various meat alternatives. Thanks so much for taking the time with us today.

BROAD: My pleasure. Thank you.