Standing With the Standing Rock Sioux

A rally led on horseback by the Standing Rock Sioux Nation and their allies. (Photo: Robert Wilson)

A rash of arrests at the Standing Rock demonstrations points to rising tensions between North Dakota state officials and the thousands that have allied themselves with the Standing Rock Sioux Nation to protest the construction of the Dakota Access Pipeline through ancestral lands and sources of water. Reporter Sandy Tolan visited the encampment that serves as a home base for the protestors, and explains to Living on Earth Host Steve Curwood that claims of protester “riots” are unfounded, based on what he observed.

CURWOOD: It’s Living on Earth. I’m Steve Curwood. The latest flashpoint in the age-old disputes between the US federal government and Native American nations recently ignited over the Dakota Access Pipeline. It would link North Dakota’s Bakken Shale Fields with Illinois refineries and carry a half a million barrels of oil a day. But the project skirts the reservation of the Standing Rock Sioux Nation, and the Sioux claim construction has already destroyed sacred sites on public land and threatens to pollute water. The Sioux also say the Army Corps of Engineers’ decision to move the pipeline from its original path near the water supply of predominantly white areas to cross traditional Native sacred lands instead violates treaty rights and amounts to environmental racism.

When the courts rejected a Native suit to block construction, the Obama Administration stepped in and suspended work near a river, but much of the building continues. Meanwhile, Lakota and Sioux elders and activists have set up camp and are protesting the pipeline with drumming and chants and prayers.

Reporter Sandy Tolan took his recording gear to the camp by the Cannon Ball River and joins us. Welcome to Living on Earth, Sandy.

TOLAN: Good to be here, Steve.

CURWOOD: So, you recorded these protests. What did they feel like?

TOLAN: Well picture a line of cars, almost 60, 70 cars long, all protesters moving slowly up a hillside toward where the path of the pipeline is, and then eventually coming up upon several dozen police vehicles, including a paddy wagon, an armored personnel carrier. The protestors, mostly Native American but also many supporters, they began praying and singing songs and dancing.

[SOUNDS OF DRUMS AND CHANTS]

There were a couple of dance groups and then the police moved in. You had almost 85 or more - perhaps more - police coming in. They basically said, “If you don’t move right now you’re on private land, you’ll be arrested.” Most of the protestors and the few journalists that were there, including me started moving out. I nearly got arrested. They said if I didn’t move within two seconds they would arrest me. Twenty-seven people were arrested that day, those who did not move and stayed around the teepee area. And strikingly, local prosecutors are bringing rioting charges against the demonstrators.

All the demonstrations I’ve seen are peaceful, and they all seem to be peaceful but the state seems to be ratcheting up the tension by bringing these rioting charges against peaceful protestors. They’re raucous, they're shouting, but they're peaceful. Meantime, here’s local sheriff Paul Laney.

CURWOOD: Sandy, is there anything to his claims?

TOLAN: Well I think what this really shows, Steve, is how much animosity there is from state officials at the protestors. The reservation has really been militarized. National guardsmen check vehicles at a highway checkpoint. The main protest camp is regularly surveilled by a light plane that circles overhead. There’s a helicopter that buzzes protestors regularly. There were multiple reports from encampment residents that I interviewed of surveillance drones and so-called “stingray” devices that vacuum personal data from cell phones. You know, at times I felt I was back reporting in the West Bank, and not in the Northern Plains, and Standing Rock Tribal Chairman David Archambault says, it’s not because of protesters that tensions have ratcheted up. 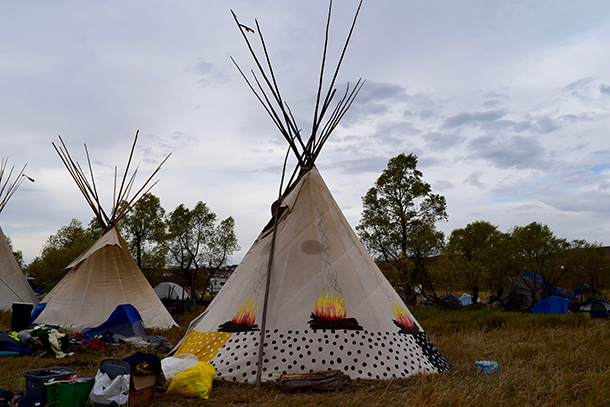 Tipis dot the landscape of the campsite. (Photo: Jacqueline Keeler)

TOLAN: It should be noted too that Archambault himself was arrested at a recent protest – and strip-searched. The chairman of the Standing Rock Sioux tribe was strip-searched. He stood naked as an officer checked his braid for weapons. One woman told Amy Goodman that she was strip-searched and forced to “squat and cough.” Add to these, the inflammatory rhetoric of local radio hosts. When I was there I repeatedly heard them call anti-pipeline protestors “terrorists”, and it’s clear to me anyway that the state has adopted a kind of scorched-earth policy against the anti-pipeline forces and just about any media at all sympathetic to them.

CURWOOD: Why is the state of North Dakota pressing so hard for this pipeline?

TOLAN: Well, you know, North Dakota, is almost like energy is a religion there, coal and oil in particular. North Dakota went all in on fracking about 10 years ago, roughnecks flooded to the Bakken oil formation in the northwestern corner of the state. Thousands of wells were drilled for fracking. It was a real gold rush. Oil production increased tenfold in a decade, and so did social ills: housing crunch, homelessness, man camps springing up in the oil patch, petty crime, rape and other violent crime. But, also so much money. But fracking, as you know, is not economically feasible at the current barrel price of about $50, and so state revenues fueled by this boom in North Dakota have dropped by more than half. And so did the number of operating drilling rigs, and now the state is hurting. This is the context for this pipeline. State officials are determined that this Dakota Access pipeline, which they argue they need and is still economically feasible, will go through. 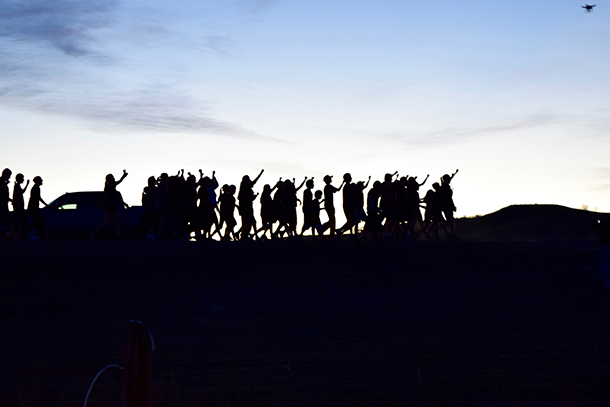 CURWOOD: So the state is determined, and on the other hand, seems that the Standing Rock Nation seems to have garnered support from all over the world. How correct is that? Where are they coming from and why?

TOLAN: Well it’s true. People have come from all over the world, certainly from all over the US. One of the most striking things I’ve seen in a long time, Steve, is walking down the main so-called road of the largest encampment. That main road is called Crazy Horse Avenue. And you look on either side, and there are tents for food donations, there's a mess hall, there’s food storage area, clothing donation area. There's an elementary school.

Most striking is the 300 tribal flags that line Crazy Horse Avenue. People have come as far as away as Central America even, Native people of Norway have come, and from all over the US. And I spoke with another Native American journalist, who grew up in North Carolina identifying more with the African American side than the Seminole side of the past. But when she heard about what was happening at Standing Rock, she felt compelled to go there. This is Rose Davis.

DAVIS: I just felt that the ancestors were, you know, drawing me here. I feel comfortable here. And it's one of the most refreshing healthy atmospheres that I’ve breathed in some time. There's a lack of corporate feeling here. There's nothing for sale, you know. There's a kindness, gentleness, and gentle embrace of what I consider to be the spiritual aspect of being a human being.

TOLAN: I spoke to a couple of very thoughtful people from the Indigenous Environmental Network, Tom Goldtooth and Kandi Mossett. They’re a big part of the so-called “keep it in the ground” movement, which has spearheaded a lot of the climate-change opposition to both the Keystone XL and Dakota Access pipelines. Mossett told me, first of all, that the Dakota pipeline “would increase emissions by the equivalent of 29.5 new coal fired power plants per year, or the equivalent of 21.4 million more vehicles on the road per year”. 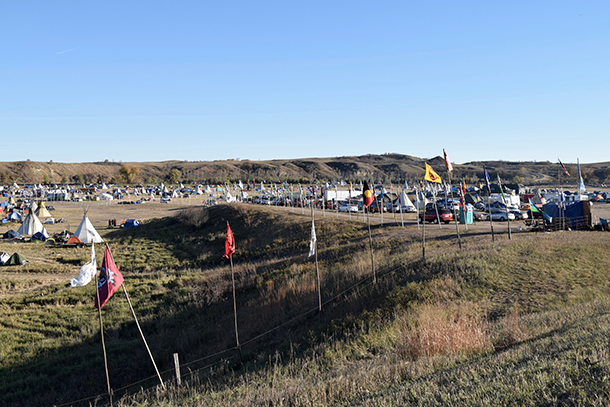 But she also described a vision for alternatives to massive pipeline projects, to transition from a fossil fuel economy into more of a renewable economy. And she said examples could start right there, this winter at the camp near Standing Rock, with people donating solar power and wind power and earth lodge building and long house building and wigwam building materials, and even tiny houses.

Tom Goldtooth shared more of a global, spiritual vision with me. He said that what's happening now at Standing Rock has been long prophesied by the elders.

GOLDTOOTH: We've been told that this is going to happen. That it’s part of indigenous rising. The prophecies say that our people are going to come back around to revitalizing our language and living those original instructions that were given to us. It's not just the Native people, 5,000 people came here just a couple of weekends ago. And, you know, some of them were non-native people. We're getting support from all over the world. And they're saying, seeing something here that gives them inspiration to also re-evaluate their own relationship to their community, their relationship to their families, and really question this power construction called capitalism right now, you know.

CURWOOD: So winter is coming on and it gets cold in the Dakotas, as I understand. What happens next?

TOLAN: It sure does get cold. In the encampment which has reached a population of 5,000 during the summer there's a hard core group of about 320 who say they are planning to stay on the land throughout the winter. Now, as many people told me, it gets to 30 below, not including the wind chill in the northern plains. Of course people of the Great Sioux Nation and Lakota and Dakota people have lived in this environment for thousands of years, although not for at least the last century. So, there's a lot of concern on the part of the local community on the part in nearby Cannonball. In the camp, in the largest camp, there's plans to sort of huddle in to bring everyone closer together, to get warmer materials. 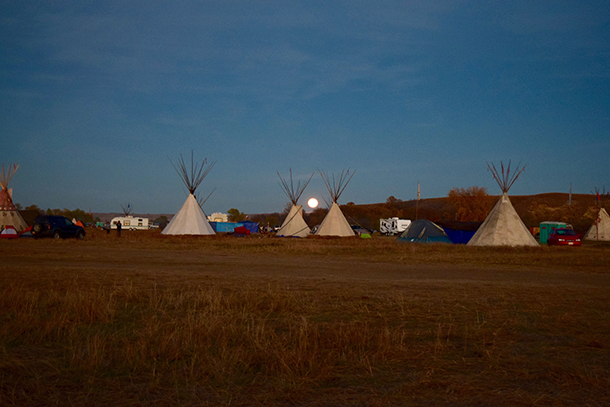 A core group of protestors has vowed to demonstrate as long as it takes to terminate the pipeline project, even if that means camping out through the harsh North Dakota winter. (Photo: Jacqueline Keeler)

There's some Inuit people in Canada who are actually shipping down teepee materials made of warm animal skins. An Oregon tribe is doing much the same. And there's an overall feeling that, one way or another, a core of resisters, of opponents to the pipeline project are going to dig in and oppose that pipeline through the winter.

CURWOOD: Reporter Sandy Tolan. Thanks so much for taking the time with us, Sandy.

TOLAN: Good to talk with you again, Steve.