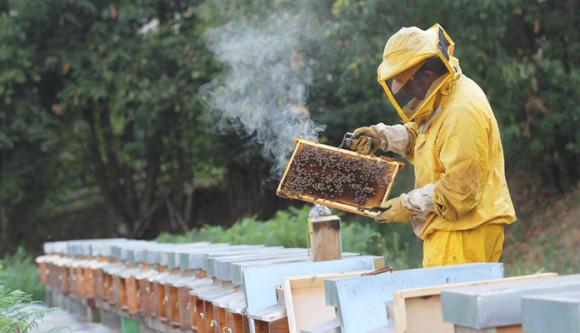 Pollinators like bees are crucial to a secure food supply. (Laura Turner Seydel)

Eco-activist Laura Turner Seydel tells host Steve Curwood that she did everything she could to make her yard a haven for her beehive but she couldn’t protect the bees from the deadly chemicals her neighbors used on their lawns.

CURWOOD: It's Living on Earth, I'm Steve Curwood. Eco-activist Laura Turner Seydel is passionate about living an environmentally conscious life. That includes urban homesteading - growing a garden, keeping chickens and bees. But earlier this year she had a setback in her beekeeping at her Atlanta home, as I learned during a tour of her carefully planned and designed garden.

SEYDEL: Well, it was a process getting there, first of all, we did a locally planted indigenous grouping of native plants that are drought resistant and healthy. We got rid of all of the chemicals - it’s 100 percent organic. We fertilize with our compost and worm poop so we don’t have to use many chemicals to grow our vegetables and fruits and all our beautiful flowers. And then I decided we were going to plant clover for our pollinators, and I tried to do everything in my power, here, that would really be pollinator friendly.

CURWOOD: So you brought in some bees.

SEYDELL: Well, we did. I had a local beekeeper bring a hive, and she established a colony, and we had them for about a year-and-a-half, and one day I went out there to see how they were doing, and I noticed there wasn’t any activity. 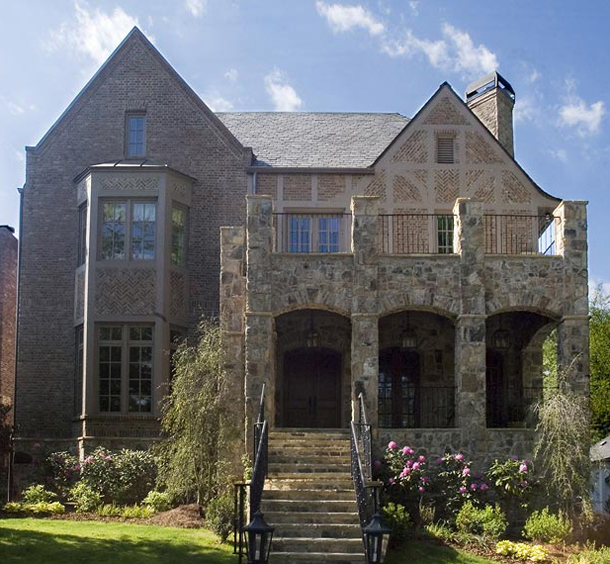 SEYDELL: It was not a good sign. And Cassandra Lawson, who is an urban beekeeper, and who keeps about 20 hives around the city said, “Laura, you really have a significant problem. Your bees are dead and gone.” And I said, “Well, what happened?” And she said, “Well, I’ve never seen anything like this before.” And she said, “The bees actually encapsulated the pollen within the hive,” which tells us the pollen was so toxic, and they couldn’t get it out of the hives, so they just tried to encapsulate it.

CURWOOD: Now, bees sometimes die because they sometimes run out of food over the winter. It’s very cold, but it wasn’t too cold, they hadn’t run out of honey.

SEYDELL: That was not it at all. It was actually because I live in an affluent neighborhood, and there’s a tremendous amount of chemicals that are used to keep a yard looking perfect, and lot of the home products, the home garden products, are filled with pesticides that are very harmful to all insects, including our pollinators, and now, even in the big box stores there was a study done recently, a case study, and it was reported by Friends of the Earth a couple of weeks ago, that 50 percent of the plants being sold there, flowering plants, have this certain class of chemicals in them called neonicotinoids, which have been attributed or linked to massive bee die-offs in this country and Canada and around the world and actually the EU banned it, its use temporarily I think a two-year ban until they could prove that it was safe for pollinators.

CURWOOD: Well, I want to see what you’ve done with your yard to help pollinators.

SEYDELL: In the springtime, we have two different kinds of clover, we have the White clover and we have the Red clover. It’s not blooming now, but in the spring it’s a sea of white, and I can see my neighbors, and I’ve had a comment or two, it’s like, don’t let that disease come over here.

SEYDELL: But it gives me an opportunity to really inform and educate, which is what I love to do.

CURWOOD: Are we going to have any luck here and find a four-leaf clover?

SEYDELL: I’m really good at finding four-leaf clovers, but I haven’t had much time to look recently. But we might get to see some in the back. So I’ll show you my raised beds. Come on. And I’ll even show you my chickens.

CURWOOD: Chickens here in the city?

CURWOOD: Is that legal in downtown Atlanta?

SEYDELL: Oh, yes, chickens are quite legal, as well as bees.

SEYDELL: See, there they are right there. The chickens.

CURWOOD: Oh yeah. Look at that.

SEYDELL: You see? So they’re free-ranging chickens, and then they have their little coop. And there are more raised beds and a patch of strawberries.

CURWOOD: So the bees were right back here, huh?

SEYDELL: Yes, they were. And my beekeeper, she had never seen anything like what happened with my beehive before, you know, how the bees encapsulated the toxic pollen, and she manages bees all over the city of Atlanta, and she says her most productive hives have always been in communities of low-income because they don’t have the discretionary income to buy all the chemicals. I think that there’s a lot to be said for that. We need to be more like that, organic and chemical free, so that the pollinators can do what God made them to do.

CURWOOD: Laura Turner Seydel is an eco-activist in Atlanta, Georgia. Thanks so much, Laura.

SEYDELL: Thank you, Steve. We'll have to have you back more often. This was a real treat.