A coalition of 300 environmental groups recently named the Allegheny National Forest in northwestern Pennsylvania the most endangered national forest in the United States. The site is home to the country’s highest percentage of forest land open to commercial oil and gas drilling. But while the government owns more than 510,000 acres of the forest, the mineral rights to the land are private. As Ann Murray reports, this makes for a complex debate about oil and gas management in the Allegheny.

[SOUND OF DRILLING INTO ROCK]

MURRAY: A few miles from the Allegheny National Forest's southern edge, a 60 foot drilling rig dwarfs the young trees that surround it. At its base, a mud-soaked crew feeds pipe down a hole that they've bored deep into the earth.

HITCHCOCK: They've drilled a good hole out to size and everything properly. And they've worked with us...our schedule and stuff, and it’s worked real well."

MURRAY: Dick Hitchcock is on site this morning to check the crew's progress. He's with Pennsylvania General Energy, one of about 100 companies that operates in the forest. Although Hitchcock says it doesn't take much time to sink a well....

HITCHCOCK: They're in here three days and they're gone.

MURRAY: ….wells operate for 25 or 30 years. This one will join 6,000 active wells that are scattered across the forest floor. Buried 1800 feet below the surface, extraction of gas and oil from this rock formation is costly. PGE spends about 100 thousand dollars to drill and operate each well. 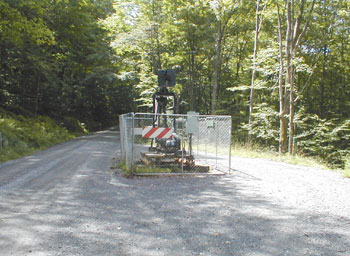 Kevin Elliott is the Allegheny's Forest Service supervisor. He says oil and gas extraction has a long history in northwestern Pennsylvania.

ELLIOTT: About the same time period that the gold rush was drawing folks to California, the first oil well in the country was developed just outside the Allegheny National Forest.

MURRAY: That well was sunk in 1859 and the area exploded with oil exploration and logging. The Allegheny's half million acres were purchased in the 1920s, 30s and 40s by the Forest Service. But the valuable oil and gas rights weren't for sale. The mineral rights under 94 percent of the forest remain in private hands and subject to state law. Kevin Elliott.

MURRAY: Jim Kleissler directs the Allegheny Defense Project, a local environmental group. ADP believes drilling damages the forest's water and habitat. Kleissler says at least 4,000 acres of the national forest are taken up by existing wells. And scores of additional sites are under development.

KLEISSLER: It looks like there's construction up here. I brought these maps.

MURRAY: Kleissler walks through the Salmon Creek valley-an area he calls "one of the last best places" in the Allegheny. Stands of second-growth birch, black cherry and striped maple cover the hills and plateau in this 35,000-acre watershed. Before development started here in 1999, this part of the valley hadn't seen oil and gas drilling for decades.

KLEISSLER: It was just recreationalists that would come down here a few years ago and now it's just oil and gas trucks all of the time.

MURRAY: This afternoon, burly trucks rumble by on Forest Road 145 - a gravel road that parallels the path of the stream. As Kleissler follows the trucks up a private access road, he explains that ADP sued the oil and gas developer and the state for failing to protect Salmon Creek and it's tributaries from sediment, an organic pollutant. The parties recently reached a settlement. Development of the 50 sites contested in the suit will proceed. But the state and oil and gas company will fund a stream study to identify dragonfly and damsel fly species - bellwethers of stream health.

[SOUND OF FOOTSTEPS IN MUD]

KLEISSLER: Wow! Look at this.

MURRAY: Kleissler stops to look at a mud-clogged drainage pipe along the access road. He says the Allegheny Plateau's topography and weather make erosion even worse in these development sites.

KLEISSLER: It's dry today but it's been raining for the last few weeks pretty regularly, it’s supposed to rain over the next week fairly regularly. And they've actively constructing a road up here on top of the hill and this is probably the worst time for doing that. You're inevitably going to leave a fairly recently turned over soil exposed when it rains. And that means runoff. And that runoff means more damage to the creek. 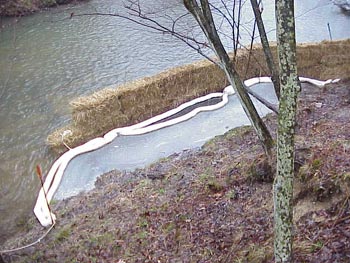 MURRAY: When sediment collects in stream bottoms only animals and plants that can tolerate a change in their habitat thrive. Since Pennsylvania waterways are owned by the state, state agencies regulate streams in the national forest. Biologist John Arway of the Pennsylvania Fish and Boat Commission says the state is seeing more cases of erosion and sedimentation tied to the construction and use of well sites and roads. It can take years for changes in fish or invertebrate populations to show up. He says the state monitors the forest's larger waterways for long-term changes but not many of its smaller streams.

ARWAY: Right now, we're more reactive than proactive with that. We don't plan a lot but whenever we exceed the threshold then we react through the loss that we have which is not the best thing for the stream.

MURRAY: Spills and leaks also pose a problem to water and safety. About 20 years ago, the U.S. Environmental Protection Agency spent millions to clean up spills in and around the forest. The massive effort coincided with the passage of the Oil and Gas Act. This state law made it illegal to discharge fluids such as brine or oil residues into unlined pits or streams.

The state is spending millions of dollars to locate and plug old wells that predate the law. No one knows how many of the tens of thousands of inactive wells still leak oil or gas. But John Arway says, over the years, companies have changed their practices.

ARWAY: Probably the big difference is oil and gas companies are handling their produced fluids a lot better than they had been. We're not seeing as many incidents that we have to respond to.

MURRAY: Industry officials say that the Allegheny's streams are getting good marks from regulatory agencies. Geologist Doug Kuntz is a vice president of Pennsylvania General Energy.

KUNTZ: When you look at this beautiful, pristine forest that we have out there, it has grown up around an active oil and gas industry. So the procedures that are in place with the Forest Service and the oil and gas operators work.

MURRAY: Kuntz says like most of the operators in the Allegheny, PGE carefully lays out its oil and gas fields.

KUNTZ: We'll drill a row of wells. Evaluate them and then step out another row of wells and drill those wells. So very deliberately we're feeling our way to see where the formation goes.

MURRAY: On a site visit, Kuntz points out that once fields have been established, company roads and well pads are built and managed by the book.

KUNTZ: We want as small a footprint as possible. Not only for environmental reasons but for the cost. And utilizing a well site and road intersection for the same purposes, it solves us from having to build a large pad.

[SOUND OF AIRPLANCE AND RADIO CRACKLES]:

WILLIAMS: Very extensive clearing, as you can see. A lot of canopy opening around this development here. And the beginning of fragmenting the forest into smaller and smaller patches in this area.

MURRAY: Several hundred feet above the Salmon Creek Valley, Professor Chuck Williams gazes at the terrain. Williams is a forest ecologist with Clarion University. He says the Allegheny is not only one of the most eroded eastern national forests, it's one of the most fragmented. Unlike steeper, less accessible land in the southern Appalachians, the topography of the Allegheny Plateau makes it relatively easy to build roads.

PILOT: There's a road off your wing tip.

WILLIAMS: Oh, yeah. This network of roads and openings will basically start to open up the forest and change the micro-climate to some extent and the composition of the forest. 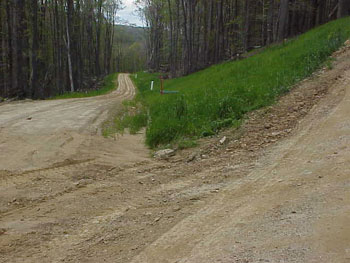 Roads are built so trucks can travel to oil wells and other roads.
(Photo: Allegheny Defense Project)

MURRAY: As more light reaches the forest floor, temperatures go up. As a result, plant and animal populations can change over time. Williams worries about the effects of fragmentation on species such as warblers and the federally endangered Indiana bat. These animals need unbroken blocks of forest to nest and forage. Roads can also act as corridors into the forest for invasive plants. One of the only ways to manage habitat in areas of the Allegheny, says Williams, is to buy the mineral rights. In 1999, the US Fish and Wildlife Service issued the same recommendation. Not so easily done, says the Forest Service's Kevin Elliott.

ELLIOTT: Number one, you have to have a willing seller and you have to have a checkbook big enough to buy those rights. That's not been the policy of the Forest Service, not just on the Allegheny, to solicit from Congress those kinds of funds.

MURRAY: The Forest Service did purchase the oil and gas rights under 35,000 acres of the Allegheny in the 1980s and left more than one-half of that land open to drilling. Restricted areas include land that Congress has designated as "wilderness.." This refers to land has little evidence of human development. The Allegheny has one of the lowest percentages of wilderness of all the national forests.

Although the Forest Service voices concern about restricting an energy-hungry public from access to reserves, less than one percent of U.S. oil and gas supplies comes from ALL national lands. Area oil and gas developers say they fill a niche market for lubricating oil and supply natural gas to several northeastern cities.

HITCHCOCK: My grandfather worked for Forest Oil and Quakerstate for 42 years and my mother is retired but still a part-time worker at Forest Oil and my dad has worked in the oil business all his life for Quakerstate.

MURRAY: What kinds of other jobs are available?

HITCHCOCK: Well (laughs) that is a good question. I just know mentally, I just think of this industry.

MURRAY: The Forest Service plans to open up a discussion about the industry and oil and gas extraction later this year. They will review the forest plan and provide a blue print for land management in the national forest for the next 10 to 15 years. The industry will make a case for the status quo. But the Allegheny Defense Project will lobby for a moratorium on new drilling and phasing out old development across the forest. Other groups will ask for more wilderness designations. The Forest Service predicts a long, passionate debate. For Living on Earth, I'm Ann Murray in Forest County, Pennsylvania.

CURWOOD: Coming up, we begin a year-long audio journey along the Lewis and Clark Trail. Stay tuned to Living on Earth.


Living on Earth wants to hear from you!