John Ryan sent us a reporter's notebook entry after watching coral have sex in the reefs off the coast of Indonesia.

CURWOOD: John Ryan is a journalist who travels the world looking for a good story and a good time. Recently, he found both on a small island just off the coast of Indonesia.

RYAN: I admit it, I went to Gililawa Lawt Island for the sex, but I promise, I only wanted to watch. Let me explain. Gililawa Laut is a harsh and uninhabited speck of land in Indonesia’s Komodo National Park. But just beyond its blistering shores are some of the world’s richest coral reefs, home to some of the most spectacular and bizarre sexual events in nature. The sex lives of corals were largely a mystery until a moonlit night in 1981 when scientists first observed a mass spawning of corals on Australia’s Great Barrier Reef. Corals are usually about as animated as rocks, but on that night they were spewing millions of eggs and sperm into the sea, turning the crystal clear waters into a sort of multi-color underwater snow storm. Australian scientists now know that on a few special nights a year, up to 40 coral species, most of them hermaphrodites, simultaneously blast pink, purple and green packets of spawn, in living blizzards of reproduction. The spawn form slicks on the surface so big and bright they’re visible from outer space. To see corals spawning, you have to be brave enough to swim in the ocean at night, and exceedingly lucky. 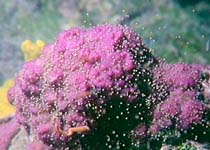 Away from the Great Barrier Reef, scientists still know very little about the timing of coral spawning. But I dove above the reefs of Gililawa Lout to see another kind of sex spectacle. These reefs are known to scientists and fishermen as a spawning aggregation site: a place where fish gather to spawn in massive numbers, when the moon and tides are right. Above the colorful but motionless corals were dozens of groupers, some with neon blue polka-dots, others honeycombed with perfect hexagons from head to tail, shimmying alongside each other, fighting, and making sudden, mad dashes toward the surface to spawn. At one point, I wasn’t sure what I was seeing. Up ahead, a small group of very large parrot fish, as big as me, hovering like blimps, occasionally lurching forward to take large, noisy bites out of the reef. Behind them, I noticed a cloud in the water that didn’t look like the usual parrot fish poop, of freshly ground coral sand. Had the clumsy looking reef giants just spawned? I swam forward to find out. If I’m not mistaken, it was my first, and I hope last, time swimming through a cloud of sperm.

Most reef fish not only practice group sex, they actually change their gender. Groupers, wrasses and parrot fish all start out as females and a lucky, or unlucky few, depending on your point of view, become males. When a dominant male wrasse dies, the ranking female from his harem soon takes his place. During her metamorphosis her appearance can change so much that you’d have no reason to think he’s the same species, let alone the same individual, as she was before. I can’t even begin to fathom what human societies might be like if, say, we all changed our sex and skin color when we turned thirty.

Here in Komodo National Park, as in most of Southeast Asia, grouper spawning sites have been hammered by the trade in live fish for seafood restaurants in Hong Kong and for aquariums in the west. The usual technique for catching reef fish alive is for divers to stun them with squirts of cyanide, then crack the reefs apart with crowbars to extract the fish from their hiding places. There’s big money in this dirty work. A single 90 pound Napoleon wrasse can sell for more than $5,000 in Hong Kong.

Indonesia has banned cyanide fishing and the export of endangered species, but the cash strapped and often corrupt authorities rarely enforce the law. In Komodo, the Nature Conservancy is funding park patrols against destructive fishing. But given the outrageous prices that live fish fetch in Hong Kong, it’s an uphill battle. In the end, the surest way to allow Indonesian fish to keep satisfying their unusual desires may be to get the gourmet consumers of Hong Kong to curb theirs.

CURWOOD: John Ryan is a Seattle-based journalist and author of Seven Wonders: Everyday Things for a Healthier Planet.