The Season for Sunchokes 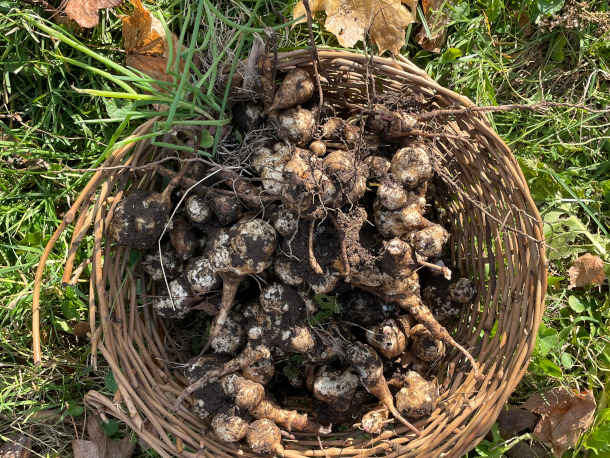 Hosts Steve Curwood and Bobby Bascomb meet up in Bobby’s garden to harvest sunchokes, one of the foods that make up the "Seven Sisters" of Abenaki traditional agriculture. Then, the two discuss some recipes that use the tasty tubers, and roast a few to make some sunchoke chips.

BASCOMB: So It’s a beautiful fall day today here in NH, and I’m waiting for Steve to arrive any minute now to help me dig up some sunchokes.

BASCOMB: Oh my gosh, we really lucked out with this weather, it’s so beautiful today.

CURWOOD: So here we are in the harvest season. In your garden, Bobby.

BASCOMB: Yes, yeah, you know me you know I'm a pretty big gardener and we just heard this story from Amyrose Foll about the seven sisters and I have to say I never knew there were seven sisters I grow the three sisters corn, beans and squash but then I read this article she wrote and I realized I actually grow six out of the seven. I don't grow tobacco, it never occurred to me to do so. But this is actually right now the season to dig up sunchokes everything else My garden is dead or dying looking pretty sad. But right now is the season for sunchokes.

CURWOOD: Alright, well I’ll grab one of these shovels.

BASCOMB: So it's just right here in front of us. And you would probably have no idea that there's food growing in this patch of dead looking dried up weeds but…

CURWOOD: Yeah. As a matter of fact, it don't look like much of nothing going on here.

BASCOMB: It doesn't. But had you been here like end of September beginning of October. That's when sunchokes are blooming. And it's great because it's just when all of the other blooming flowers are done, that sunchokes come out. And they're this beautiful yellow flower and they're in the sunflower family. And they're a wonderful late season food for pollinators. You know, I've seen them covered in bees and even some straggling butterflies that are still hanging around. Love the sunchokes.

BASCOMB: Yeah, they must be what, eight feet tall or so.

CURWOOD: Yeah, those are big. And there's Oh, I see the remnant of the flower on the top there. Yeah, it's all kind of dark and shriveled. And the leaves are shriveled.

BASCOMB: Yeah, they don't look like much right now. But this is actually the time to harvest them. I was thinking maybe we could start along the edges. Because the other thing about sunchokes is that they just spread and they'll take over this whole little field Here I have some horseradish growing. So I’d sort of like to, you know, maybe get on that side of it.

CURWOOD: Alright, so we'll come on the other side of the horseradish. Okay.

CURWOOD: oh, your soil is so dark and rich Bobby.

CURWOOD: Wow look at these Bobby you grew some big ones. Hmm.

BASCOMB: Steve, I did so little to grow these but yeah, they do look good. They're white sort of like a potato but with all these little funky knobs all over them.

CURWOOD: So what do they want? Where do they need to be in the bright sun? 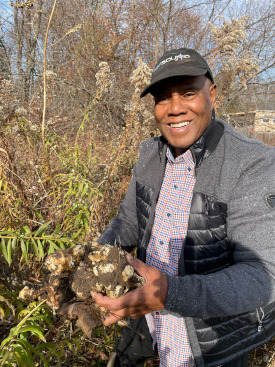 BASCOMB: Yeah, they like sun not too wet. And honestly, if you leave any one or two behind, they'll just take off the next year. So growing sunchokes is sort of a commitment. You're almost never really going to be rid of them. Which is okay, I like them.

CURWOOD: And this comes from the Native American tradition, people grew this in North America long before people came from Europe and Africa here.

CURWOOD: Well, I can see why especially in terms of timing, here it is November, and you're getting a nice harvest.

BASCOMB: Yeah, exactly. And honestly, you can harvest these pretty much year round. I mean, once the ground is frozen, it would be a pretty arduous task, but you could

All right. Well, should we go cook up some sunchokes?

CURWOOD: Yeah, let's do that

BASCOMB: All right. So we're in the kitchen. Make some room here. I already popped the oven on. So it's preheating for us. And first thing we need to do obviously is wash them they're pretty dirty.

CURWOOD: They’re covered in a bit of dirt.

BASCOMB: So, I think part of the reason that maybe they're not so popular as a food anymore is that they actually have a reputation as sort of giving you some intestinal problems, sort of like beans. But if you don’t overdo it, if you just have a few it should be ok. Also, they're not like potatoes in that they don’t last very long. Just less than a week of so in the fridge and they’ll start to shrivel up on you.

BASCOMB: OK, wash these. Put the clean ones in the bowl. That should be good enough to start, huh?

BASCOMB: We can slice some up, olive oil salt sort of chip style.

BASCOMB: Alright, so we patted them dry we cleaned them we'll put some olive oil, salt and pepper and then in the oven.

BASCOMB: So this is set at about 375 I guess it might take 15 minutes or maybe something like that.

CURWOOD: These are better for you than than potatoes, right? 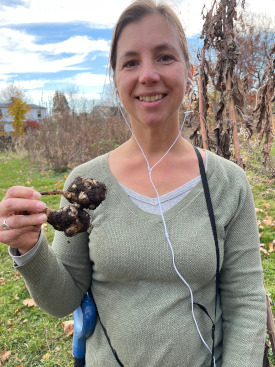 BASCOMB: So I think these are about done, Steve let's check it out.

BASCOMB: I think you just want to cook them until they're pretty soft. All right. Let me grab a special and a couple forks and plates

CURWOOD: Alright, you're the cook. You tell me what you think.

CURWOOD: Okay, mmm… A little towards the parsnip end of things.

BASCOMB: The texture is a little parsnipy, I could see that. They're not. I don't know. What's the word powdery like a potato.

BASCOMB: Some of the edges have a little bit of crunch to them. The middle is super super soft. And the edges just a tiny bit crunchy.

CURWOOD: What I bet these would be great in a soup.

BASCOMB: Yeah, yeah, I think you could probably treat them anyway you treat any root vegetable in a soup and a stew. You could pan and fry them if you slice them, you know pretty small. You can shred them. You can eat them raw. You know, what what can’t a sunchoke do they are just the gifts that keep on giving. You can harvest them all year. They're super easy to grow.

CURWOOD: I know I've learned something today, Bobby. Thank you.

BASCOMB: Oh, thanks for coming. I'm glad you like them. And Steve, you're going to take some home right? Because we have about 20 pounds of sunchokes over here.

CURWOOD: Okay. Yeah, but I have to cook them up in the next couple of days.

CURWOOD: But they're really good.

CURWOOD: I’m going to have another bite here. Well there’s another piece here, I don’t think I should let it go to waste.

BACOMB: No, no certainly not.