The Grand Canyon of the Atlantic Ocean

Hudson Canyon is a vast underwater gorge and ecological hotspot with deep-sea corals that’s being considered for national marine sanctuary status. Living on Earth’s Jenni Doering called up Merry Camhi, director of the New York Seascape at the Wildlife Conservation Society and New York Aquarium to learn more about what protecting Hudson Canyon could mean.

CURWOOD: Set sail southeast of New York City and about 100 miles out, you’ll be coasting above an underwater chasm far deeper than the Grand Canyon. Descending ten thousand feet into the depths of the Atlantic Ocean, Hudson Canyon is a vast gorge and ecological hotspot that’s being considered for national marine sanctuary status. That would make it the very first marine sanctuary off the coast of New York and New Jersey. Living on Earth’s Jenni Doering called up Merry Camhi, director of the New York Seascape at the Wildlife Conservation Society and New York Aquarium to learn more.

CAMHI: The canyon itself is the drowned riverbed of the Hudson River, right? So it has actually cut a channel and a deep fissure into the side of the shelf. And it's down there where we have a very complex, a fragile, a biodiverse, a productive ecosystem that is characterized by a lot of different kinds of habitats and a multitude of species. It's what we like to call an ecological hotspot, it's widely recognized by scientists as a hotspot, because of the high biodiversity that's there, and the amazing productivity and diversity of the ecosystem.

DOERING: Wow. Yeah, I can imagine. I mean, I think in biology, there's this idea that when you have different environments, you tend to have a lot of different species that can take advantage of those environments and a mixing of environments. And in this case, it's, I believe, thousands of feet deep and 350 miles long. So what are the species that we can find there in this ecological hotspot? 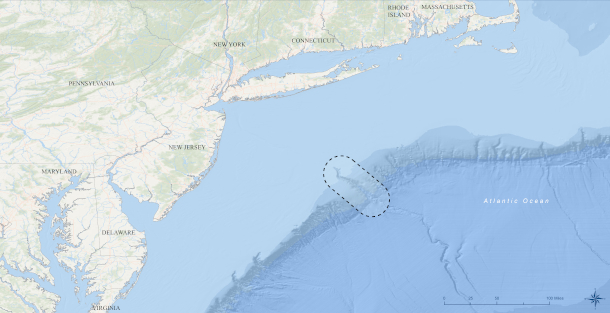 CAMHI: Yes, so you're right, the diversity of habitats means that we also have a diversity of wildlife that it can support. And we have everything from, starting at the surface, an amazing diversity of pelagic seabirds that spend most of their time offshore. I think we have like almost 20 different seabirds that had been identified there. We have 17 species of marine mammals, mostly large whales, like sperm whales, as well as a lot of different kinds of dolphins, right. There are over 200 species of fishes in there and hundreds of species of invertebrates. Four of the world's seven sea turtles also pass through or depend in some way on the riches of the canyon. And to top it off at the very bottom, we have cold water corals.

DOERING: It certainly sounds like an amazing place. And there are some like yourself who believe it's well worth protecting. So tell me about this proposal to make Hudson Canyon a National Marine Sanctuary. How did we get to this point?

CAMHI: Well, I think part of this is just recognizing that right here in these waters, right here in our own backyard, we have this amazing treasure. The Hudson Canyon is the largest submarine canyon along the US Atlantic coast. And it's also one of the largest submarine canyons in the world. It's important to our local fisheries, there are commercial and recreational fisheries out there that are worthy of protection. There are all these species, many of them endangered and threatened, some sea turtles, marine mammals, sharks and some other fishes, that depend on the canyon. And whether it's seasonally or they live there full time, that need that canyon ecosystem. And because we are a wildlife conservation organization, we decided that this was worth pursuing as a National Marine Sanctuary. 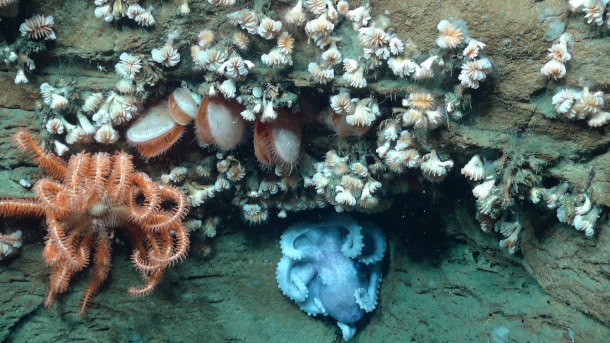 CAMHI: One of the main benefits that we think would happen for Hudson Canyon is that it would exclude oil and gas and mineral extraction. That's one of the most important conservation benefits. A lot of other uses are allowed as long as they are compatible with the goals and objectives of a National Marine Sanctuary.

CAMHI: Yes, so fishing occurs in about 98% of the sanctuary area, under the sanctuary program. And currently there are 15 national marine sanctuaries and none right here in the mid-Atlantic. So we would be the first sanctuary right here in the New York Bight and in our area and the first submarine canyon here on the Atlantic coast to be protected. It does allow for fishing, as long as fishing is sustainable. WCS believes that fishing should continue under the current authorities that manage fisheries, which is the Fisheries Service, not the National Marine Sanctuary program. Wind is also an issue here in New York, right? So we know that we have phenomenal wind resources in New York. And there is a very big push by the states of New York and New Jersey to develop those offshore wind capacity here to help reduce our dependence on fossil fuel. So WCS is supportive of offshore wind, as long as it's being done in a way that minimizes impact to wildlife and wild places, our habitats.

DOERING: Now, we've covered the endangered North Atlantic right whales quite a bit on this show. And I'm curious whether, you know, on their journey from, I think off the coast of Georgia, where they have their calves, all the way up through the coast of Massachusetts and, and Maine. Do they stop at Hudson Canyon on the way?

CAMHI: Yes, so actually, many of the great whales, including the North Atlantic right whale, pass through New York waters as they head up further to their foraging grounds, where they spend the summer, and can also pass back on their way south as they head towards their birthing grounds. One of the ways that we are able as the Wildlife Conservation Society to document this is that we have acoustic buoys that are situated in and around New York Harbor and out on the shelf, that can actually listen to the calls of whales as they are either feeding in the area or passing through the area.

Overhead view of Hudson Canyon. The transect demonstrates the width and relief of the canyon with Empire State Building for scale. (Image: NOAA Office of Ocean Exploration and Research.)

CAMHI: I think the most common sounds that we are hearing are from humpback whales.

CAMHI: Humpbacks are increasingly present in our local waters. Our waters are getting cleaner. The Clean Water Act from, you know, 50 years ago has really made a difference. Because as we all, many of us know, the Hudson River was a source of tremendous amounts of sewage and pollution that fed right into the canyon. And with, as our waters in the rivers and coastal waters get cleaner, so does the health of the canyon. With that comes resources like menhaden and other forage species that bring the predatory animals, like sharks, and whales, etc, to our local waters. And so we've been seeing an increase in whales, even within view of New York City, right in the harbor.

DOERING: So it sounds like an amazing place. And I would love to visit if I could, although I'm not scuba certified. And I think even the best scuba divers can't go two miles deep, certainly. [LAUGHS] But, but I am, I am wondering, you know, with such a special place, a lot of the time we have to worry these days about, or we have to wonder these days, about how it'll be affected because of climate change. And you know, the oceans are warming, they're also absorbing a lot of the CO2 that we're putting into the atmosphere, so they're becoming more acidic. So I'm wondering what effect that might have on this wonderful ecosystem and Hudson Canyon? 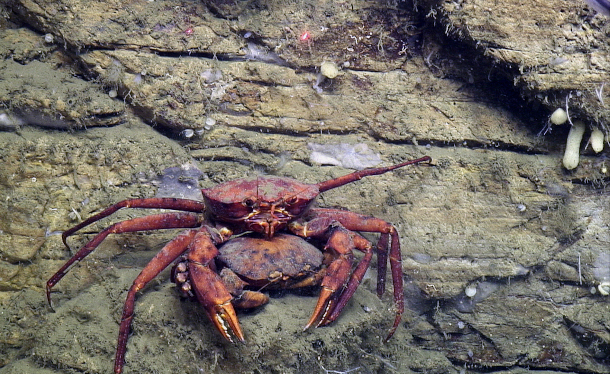 A pair of mating deep-sea red crabs rests on a ledge of a canyon wall. (Image: NOAA/BOEM/USGS)

CAMHI: Well, you're asking a very interesting question: How will climate change and warming oceans affect special places like deep sea canyons? And there's still a lot of uncertainty about that. We know it will have an impact, we're already seeing shifts in the distribution of species that occur in and around the canyon near the surface as the waters get warmer, right? A lot of our more southern species are starting to move northward as waters warm up. In addition, we know that warming can change the acidity of these ecosystems, it can change the amount of oxygen that's in the water, and that changes the dynamics of currents and upwelling etcetera in these canyons. How that's going to affect our wildlife, we don't really know. And one of the reasons we're really keen about having a National Marine Sanctuary here in Hudson Canyon, is because oftentimes, sanctuaries serve as, can serve as sentinel sites. They attract research and exploration and can actually help establish long term ecological monitoring there that will help us understand what the impacts are on deep sea ecosystems, and even how they will affect the resilience of coastal species and coastal communities by looking at those incremental changes and monitoring them over time. So that's one of the reasons we are really happy to see the government support the National Marine Sanctuary here, we're hoping it'll establish a long-term monitoring sentinel site.

More about Hudson Canyon from WCS