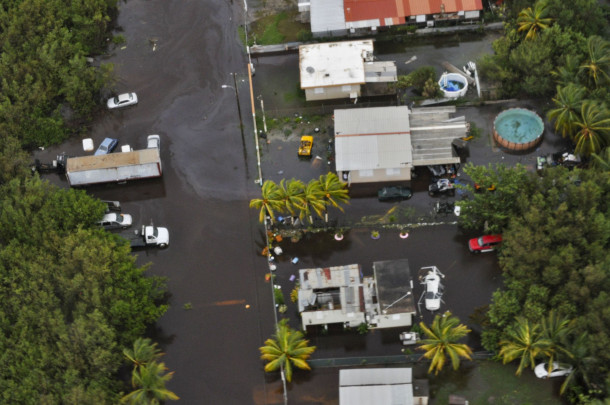 When Hurricane Fiona recently struck Puerto Rico the island was still recovering from Hurricane Maria in 2017 and the swarm of earthquakes that started in 2019. Hurricane Fiona’s extreme rainfall and flooding triggered landslides in areas destabilized by the quakes, adding to the disaster. Marin Clark, Professor of Earth and Environmental Sciences at the University of Michigan, joins Host Bobby Bascomb to discuss.

BASCOMB: Hurricane Fiona recently struck Puerto Rico, bringing upwards of 30 inches of rain, and cutting off some communities that are still struggling to recover from Hurricane Maria which leveled the island on nearly the same day five years earlier. Along with high winds and major flooding, the island has also been plagued by an onslaught of landslides. Marin Clark is a Professor of Earth and Environmental Sciences at the University of Michigan, and she joins me now for more. Professor Clark, welcome to Living on Earth!

CLARK: Thank you. I'm so glad to be here.

BASCOMB: Now, we're all familiar with the extreme rain and flooding that can come along with a hurricane. But landslides, I think are also a huge concern that maybe fly a little under the radar. What happened here most recently with Hurricane Fiona in Puerto Rico and landslides and what are you looking at right now?

CLARK: Yeah, so we expect that there were a lot all across the island. We're seeing some reports on social media of landslides blocking roads, damaging houses, but we're still in the really early stages about knowing just how widespread the problem is.

BASCOMB: And what exactly causes a landslide? Just to ask you a really basic question here.

CLARK: Sure. So in this case, the heavy rainfalls saturate the soil. And when the soil becomes saturated, it loses its strength, and it can no longer stay on the hillside and starts to move down slope, causing a landslide.

BASCOMB: And this part of the Caribbean also experienced an earthquake, right around the same time that Fiona hit the region. I think it was only a magnitude about 3.2. So not huge, but how did that contribute to the landslides that we're seeing?

CLARK: Well, more importantly, there was an earthquake that hit this area back in 2020. And it was a magnitude 6.4 earthquake. And it created about 300 landslides during this strong shaking. So that's another way to make a landslide is during an earthquake when the ground motion is really intense. That intense shaking can cause hillsides to become destabilized and cause a landslide. It was a pretty modest event, landslide event related to that earthquake, it affected the southern part of the island. But one thing that we know from other places in the world is that when you have an earthquake, and you create landslides during the strong shaking, that the other parts of the hillsides can remain vulnerable for periods of years after the earthquake, meaning that they're more susceptible to landsliding when a rainstorm or another earthquake comes in short succession. So most of the time we think about the rainstorms that follow the earthquakes as being really potentially damaging for at least a few years time frame. And that's exactly what has happened here in Puerto Rico.

BASCOMB: Well, what can Puerto Rico do to become more resilient to these landslides and the aftermath of extreme weather events? 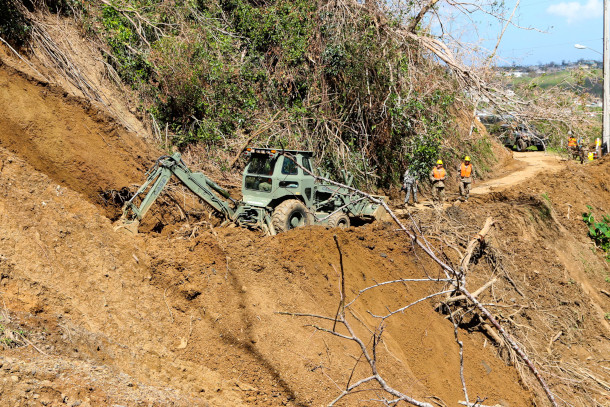 CLARK: Yeah, that's an excellent question. So recently, the USGS and my collaborators at the University of Puerto Rico Mayagüez have installed a rainfall meteorological station monitoring network for landslides. In particular, across the island, they have about a dozen stations or so that just went online in the past year. And already, we know that one of those stations, as the scientists were watching the soil moisture conditions change, were able to get out reports to the local officials in that area to make some evacuations. And we know those evacuations were important and did save lives because there were landslides that impacted houses in that region just a few hours after that information was delivered from the weather station nearby. So we know that monitoring stations are important and can help provide life-saving information during an event like this. We also know that that kind of station data is really critical for also getting the scientific data that allow us to make better predictions in the future. And by that I mean, having ground truth data that we can compare it to satellite data, so that we can use satellite data in advance of a storm in order to make better predictions about which areas might be hard hit.

BASCOMB: Now Puerto Rico has seen a lot of development, which is often preceded by deforestation and clearing land. To what extent did removing native vegetation from the landscape exacerbate the landslides that we're seeing there?

CLARK: For sure land use changes do affect the stability of hill slopes. We know that removing the vegetation either by human activity or by natural causes, such as things like wildfires do contribute to stability problems and to increase landslides.

BASCOMB: Puerto Rico, of course, is not the only area of the world affected by landslides. What other countries or regions are you concerned about, you know, especially looking forward as scientists tell us to expect more extreme weather events with climate change?

CLARK: Yeah, I think that one thing about land surface hazards so landslides and river floods, they happen everywhere. And we also know that that threat's changing. It's increasing with climate change and with urban expansion into hilly and mountainous regions. So there's a lot of places on the globe that we're concerned about. One thing that we're thinking about right now is how hazards multiply. So for example, we know that in earthquake-prone regions like Puerto Rico, that it's not just the earthquake, that's of concern, but that an earthquake can then magnify another hazard. And so that gets to the point of earthquakes destabilizing slopes, making those slopes more fragile for a period of time after the earthquake, and making them more susceptible during a storm event like Hurricane Fiona. So Puerto Rico is definitely one of the places that has that kind of hazard multiplier in effect. California is another one. Additionally, we also think about wildfires as being another hazard that is one of these multipliers. And California has all three, it has earthquakes, and it has fires. And now we're thinking about these mega storms, these atmospheric rivers coming off the Pacific and hitting the coast. And so we're really thinking much more about the concept of how hazards interact. And with land surface hazards, they're especially sensitive to that hazard multiplier. 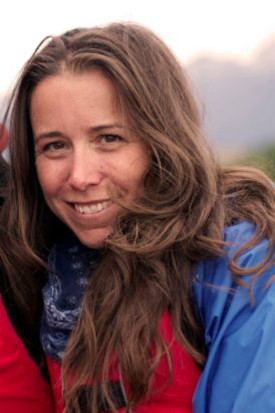 Marin Clark is the department chair of Earth and Environmental Sciences at the University of Michigan. (Photo: Courtesy of Marin Clark)

BASCOMB: What other regions of the world have that same set of circumstances?

CLARK: There are many places. The high topography in Himalaya is another place where they have major earthquakes. We know that the Himalaya are probably capable of a magnitude 8.5 or nine. And the steep mountains are landslide prone. And every summer, those mountains are hit by intense monsoon rains. So they also are a place where we see these types of interactions frequently.

BASCOMB: Now hurricanes obviously make the news. I mean, they're huge events or they can be, you know, everybody knows about them. But I think landslides people sort of think are you know, not such a big deal. They close the road for a day you deal with it. How do you see them though?

CLARK: Well, individual landslide and river flooding events are smaller, like you said, they don't tend to be as newsworthy as some of the other bigger hazards like flooding or earthquakes or volcanic eruptions. Landslides are everywhere. And they happen all the time. And so we think that the cumulative effects of these hazards are probably much more significant than we've paid attention to before.

BASCOMB: That’s Marin Clark, a Professor of Earth and Environmental Sciences at the University of Michigan.

Marin Clark at the University of Michigan