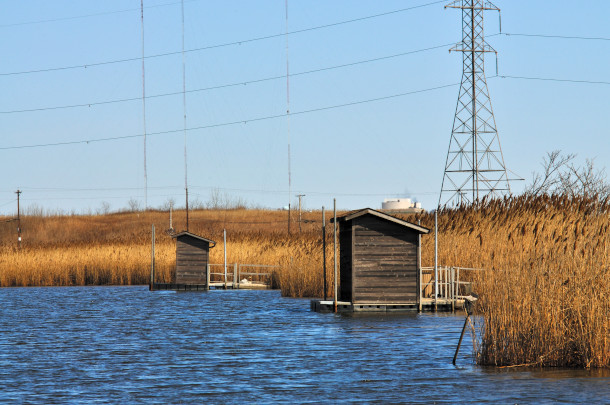 Sandwiched in between New York City and the urbanized communities of northern New Jersey, restored portions of the Hackensack Meadowland at DeKorte Park in Lyndhurst provide a welcome sanctuary for a wide array of wildlife. Part of the park sits atop an old landfill and a "garbage island" where trash was once dumped illegally. The Meadowlands provide a stop-over for migratory birds travelling the Atlantic Flyway. (Photo: Steven Reynolds, Flickr, CC BY 2.0)

Landfills in America were often sited in coastal wetlands before their value as wildlife habitat and buffers from coastal storms was better known. Now rising seas are threatening to unleash the trash, toxics, and even nuclear waste these landfills contain. Journalist Dave Lindorff joins Host Bobby Bascomb to discuss the risks.

Note: This segment starts at 25:59 in the above podcast file.

BASCOMB: There are roughly 100,000 landfills across the United States and more than half are on the coast where sea level rise is a serious threat. In fact, scientists tell us to expect several feet of sea level rise in the next century as a result of climate change. Independent journalist Dave Lindorff has been digging into this story for the Nation and he joins me now. Dave Lindorff welcome to Living on Earth.

LINDORFF: Thank you for having me.

BASCOMB: Well, why are there so many landfills sited in coastal areas? I mean, I guess that's where the people live mostly. So it's kind of makes sense, is that all there is to it?

LINDORFF: That's it. You know, historically, landfills have been everywhere people are, and the majority of people live along coastlines. In the US, it's about, I think, 40% of the population lives within something like 40 miles of a coastline. You know, dating back to the industrial era, they've had to put garbage in places and what they do is they pick what are considered wasted land for landfills. And wasted land is defined as land that you can't build taxable property on. And that tends to be swamps, wetlands, river estuaries, and floodplains. And that's exactly what coastlines are. I mean, it's kind of amazing. If you go to a place like the New Jersey wetlands, there are 13 mountainous landfills sitting in the wetlands. And some of them are, you know, as much as 300 feet high, filled with garbage, and closed. So they're covered with sod, they look, they look harmless, because you know, they look like grassy hills. But those waters are going to rise, they had a eight foot storm surge on top of the tide when Hurricane Sandy hit in 2012. When it gets worse, and the water's actually higher, and then you get these storm surges too, the sod is going to take, be taken off the liners that are on whatever of those landfills have liners. And many of them don't, under or over; none of them are lined underneath. And so all of this stuff is vulnerable, it could all wash out.

BASCOMB: And so the concern is literally that rising seas will just come and tear away the landfills and you'll have just garbage emptying out into estuaries, marshes and ultimately the ocean.

LINDORFF: That's right. And the thing about that is you know, remember that these these wetlands are where about 70% of the sea life in the open ocean have part of their reproductive cycle. You know, either whether it's laying eggs or mating up river or having their young, all of these creatures that ecology depends on have to have some kind of pollution-free wetlands or river estuaries for their breeding cycle.

BASCOMB: Well, that's the thing. I mean, when a lot of these landfills were built, I mean, as you said, you know, wetlands were just, you can't farm there, you can't build there, you might as well put your garbage there. But now of course, we know that they're tremendously important ecosystems, as well as protecting from storm surge and, and rising seas. That's kind of adding insult to injury, in a way.

LINDORFF: Yeah, they also are actually, I had in the article some research that showed that wetlands also are major absorbers of CO2. So if you kill off the plant life in them that does that job, you've also worsened global warming, and increased the speed of sea rise. 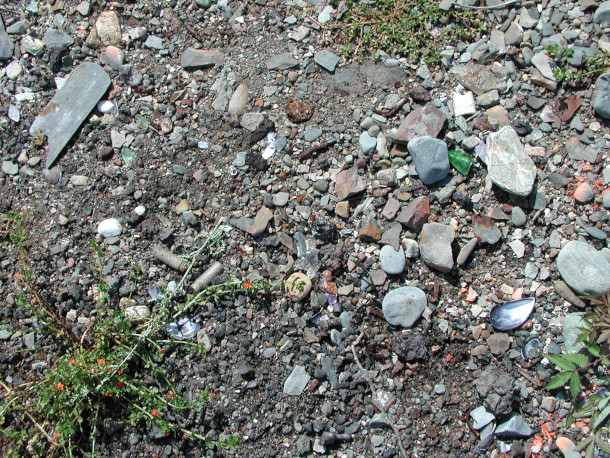 BASCOMB: And what about saltwater intrusion in these landfills? Does saltwater interact with the material in there in a different way than rainwater would?

BASCOMB: And from what I understand, you know, with these landfills, we're not just talking about solid waste here, you know, plastic cups and diapers and things which are bad enough, but there are also a lot of chemicals and even some nuclear waste that could escape. Can you tell us more about that?

LINDORFF: Here's the other thing, is most of these dumps are pre-1980. I mean, the vast majority of them are pre-1980. We don't know what's in those because there were no regulations whatsoever before 1980 on what could go into a dump. So what you have is a situation where, at a time when the US used to have a lot more manufacturing on chemical industries and things like that they were dumping their waste, their transition chemicals and so on into the local landfill. It was the cheapest place to put it. Even the Manhattan -- they found Manhattan Project waste in one of the New Jersey landfills in the wetlands and had to try to dig it all up and they still haven't succeeded. So that dump, which is closed, called the Edgeboro Landfill, it's got nuclear waste in the bottom of it. This, all of these possibilities, heavy metals, you know, dioxins, everything that's used in manufacturing can be in these dumps, and they aren't lined.

BASCOMB: Because it seems like nobody's really talking about this right now or, or making a plan to address it and you write in your article that the EPA, which would seem like the obvious government agency to, you know, spearhead taking care of this problem. They don't actually have jurisdiction over these landfills. Could you tell us about that?

LINDORFF: Congress would have to give them jurisdiction, they actually recently waived any regulation at all of landfills that are receiving less than 20 tons of garbage per day. That's a lot of garbage! [LAUGHS]

BASCOMB: Indeed. So that leaves it to states and local municipalities to try to do something with these facilities?

BASCOMB: Well, we are in this situation, and I think people are probably becoming more aware of the potential consequences of sea level rise, and hopefully including this issue of landfills. Where do we go from here? Are there any state or local governments or even international municipalities or governments that are looking at this issue that maybe can, you know, serve as a roadmap for, for the rest of us as we're going forward?

LINDORFF: Unfortunately not. I mean, the closest I can think of is the UK because when I initially started the story's research, I Googled "coastal landfills threatened by sea level rise," and the only thing I got was this study at the University of Southampton. And that was a government funded study, they came up with a list of recommendations. And you know, a survey of all the threatened areas and landfills, and that was a big step forward. I would say the first thing is that the EPA should do cataloging of all these landfills and find out in a governmental way, what the issue is and how big it is and how it could be solved. And then, you know, maybe people will start addressing it.

BASCOMB: Dave Lindorff is an independent journalist contributing to The Nation. Dave, thank you so much for taking this time with me today.

LINDORFF: Thank you for having me on.