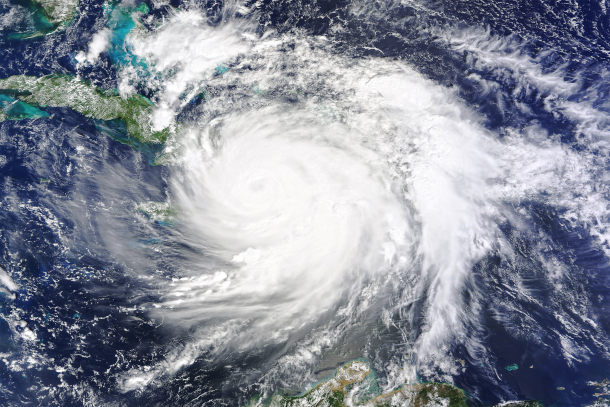 Hurricanes, like 2016’s Hurricane Matthew pictured above, are increasing in severity due to a warming climate. (Photo: Joshua Stevens, NASA, Flickr, CC BY 2.0)

With the start of the Atlantic hurricane season June 1, Tropical Storm Alex has already flooded Cuba, the Bahamas, and South Florida. Wildfires are already ravaging parts of the western United States, deadly heat waves are predicted, and some scientists say summer in the United States is the 'danger season'. Kristina Dahl, principal climate scientist with the Union of Concerned Scientists tells Host Bobby Bascomb about the disturbing trend of increasingly dangerous climate-related extreme weather events.

June 1st was officially the first day of the Atlantic hurricane season, and already Tropical Storm Alex, has flooded Cuba, the Bahamas, and South Florida. Meanwhile, wildfires are ravaging parts of the western United States, particularly New Mexico. Add in deadly heat waves and some climate scientists are starting to refer to summer in the US as danger season. One of them is Kristina Dahl, she’s a principal climate scientist with the Union of Concerned Scientists.

DAHL: So what we've seen over the last few years in the US and really in parts all around the world, is that summertime is bringing disaster after disaster and threat after threat. So whether we're talking about heat waves that affect one part of the country than the next, and then the next, or whether we're talking about hurricanes that slam into the Gulf Coast and travel thousands of miles and cause flooding in New York City, we're seeing these events that have always happened, be really amplified by climate change in such a way that they're presenting new and different dangers to our population. So we wanted to call attention to that fact this summer. And to let people know that danger season is something that we experience every year. And the more that we can recognize it as such, the more we can start to plan ahead so that we're not pummeled by it year after year.

BASCOMB: Well, let's unpack that a bit. Wildfires are already making news. New Mexico is battling one of the largest wildfires in state history. What is the relationship between climate change and this increase in severity of wildfires that we've been seeing over the last few years?

DAHL: Climate change is playing a very clear role in making wildfires in the US and around the world both more severe and larger. It's not the only factor that's at play. We know that a century of fire suppression in the United States, and the lack of management of our forests have led to a buildup of vegetation that's allowing fires to be more severe and larger as well. But studies indicate that about half of the increased area that's burning in the United States is attributable to climate change directly. What we're seeing in a lot of parts of the Western US is that wildfires are growing bigger than they used to. That's a change that if you just simply look at the average area of the average wildfire a couple decades ago, it was smaller than it is today. And some of that has to do with the fact that we have all this vegetation built up from having suppressed fires in the past, so fires have a lot more fuel that they can burn. What we can anticipate in the future is that these trends toward more severe and larger wildfires will increase if we don't get our heat trapping emissions of things like carbon dioxide from the burning of fossil fuels in check. But the more that we can reduce those emissions, the less we'll see these trends continue.

BASCOMB: So, while some parts of the country will be battling fire this summer, other parts are dreading hurricanes and the flooding that can come along with them. What are you expecting for the 2022 hurricane season?

DAHL: The predictions that we're seeing from the National Oceanic and Atmospheric Administration, or NOAA, suggests that we're going to see an above average level of hurricane activity in the Atlantic Ocean this season. So hurricane season runs from June 1 through November. And over the course of that season, NOAA suggests that we'll see up to 21 storms that get named. So not all of those will be hurricanes, some will be tropical storms. They expect we'll see six to ten hurricanes, and of those, between three and six will reach what we call major hurricane categories. That's categories three, four and five, sort of the strongest categories of hurricanes. So we do anticipate that, like we've seen in the last couple of years, we will be seeing stronger than normal activity for Atlantic hurricanes. 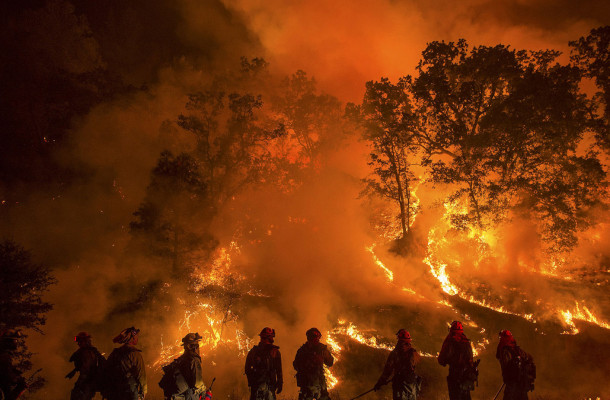 Firefighters battle the Valley Fire in California, 2015. Wildfires in the United States have been increasing in frequency and severity in recent years. (Photo: Jeff Head, Flickr, Public Domain)

BASCOMB: You know, more destructive wildfires and hurricanes. They're associated with rising temperatures and the heat associated with climate change. Can you briefly explain that for us?

DAHL: You're right. Wildfires and hurricanes both respond to rising temperatures by becoming stronger and more intense. When we look at wildfires, warmer temperatures tend to exacerbate or worsen drought conditions or dry conditions. And in the western US, that means that when it's anomalously warm, we end up drying out a lot of the vegetation that's on the ground, and then that vegetation serves as fuel for the wildfires and allows them to burn more severely and larger areas. When we look at the connection between warming temperatures and hurricanes, there are actually a few ways that climate change and warming temperatures are making hurricanes more intense. So for one, when you have a warmer ocean, all of that additional energy associated with a heat in the ocean, serves as fuel for the storm and allows it to grow stronger. We also know that rising temperatures are increasing sea levels around the world. And that means that when you get a storm surge from a hurricane, there is you know, higher water level associated with that storm surge that can then flood a greater area and cause more destruction. And then finally, a warmer atmosphere can hold more moisture. So that means that with hurricanes, they can be carrying a lot more moisture, and release that moisture as rain that then ends up causing flooding.

BASCOMB: From your perspective, what needs to be done to get us prepared, you know, for this danger season ahead, especially people that are most at risk, you know, communities of color and the elderly and low income households. How can we be smart about this knowing the dangers that lie ahead?

DAHL: So there's a lot that we need to be doing. And we need to be kind of working on it all at the same time. We need to be cutting our greenhouse gas emissions really rapidly and really steeply, because that's going to give us the best chance of limiting the future severity of danger seasons. But at the same time, one thing that we think is really needed is a national resilience strategy, so that every community across the country has access to the sorts of resources that they need to build up their resilience.

BASCOMB: Kristina Dahl is a principal climate scientist with the Union of Concerned Scientists. Kristina, thank you so much for your time with me today.

DAHL: Thanks so much for having me.


The Equation | “We’re Naming Summer “Danger Season” in the US. Here’s Why.”

More on Kristina Dahl from the Union of Concerned Scientists