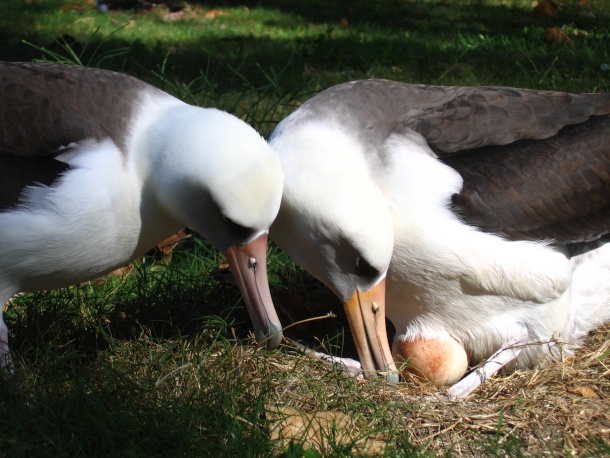 Albatrosses typically mate for life, but new evidence shows warming waters may cause an increase in albatross couple separation. Living on Earth's Don Lyman has the report.

BASCOMB: Coming up after the break NASA has the first ever recordings from Mars but first this Note on Emerging Science from Don Lyman.

LYMAN: Albatrosses, like most bird species, are monogamous, usually mating for life. However, a new study has found that warming ocean waters induced by climate change has led to an increase in albatross leaving their mates prematurely. The typical divorce rate for albatrosses is less than four percent, but researchers in the Falkland Islands found that rate doubled to nearly eight percent in years when the ocean was warmer than usual.
The scientists analyzed data collected from 2004 to 2019 on a large colony of black-browed albatrosses living on New Island in the Falklands. Breeding failure was still the main factor behind the albatrosses separating, but the divorce rate increased with a commensurate increase in average water temperatures and reached a maximum of 7.7% in 2017 when the ocean waters were the warmest. The researchers found that the probability of divorce correlated with rising water temperatures, and even females in successful breeding pairs were more likely to be affected by the warmer water than males or females that either didn’t breed, or failed in their attempts to breed.
When ocean temperatures decreased in 2018 and 2019, albatross divorce rates decreased as well. The researchers said this is the first evidence that environmental factors, and not just breeding failure, can cause wild birds to split up. Scientists said that warmer water has fewer nutrients, so they speculate that some birds may be out at sea longer than usual searching for food, which delays their return to the colony and if members of a pair return at different times, it could cause them to break up. Or, if they don’t get enough food, they could return looking unhealthy and unfit for breeding. 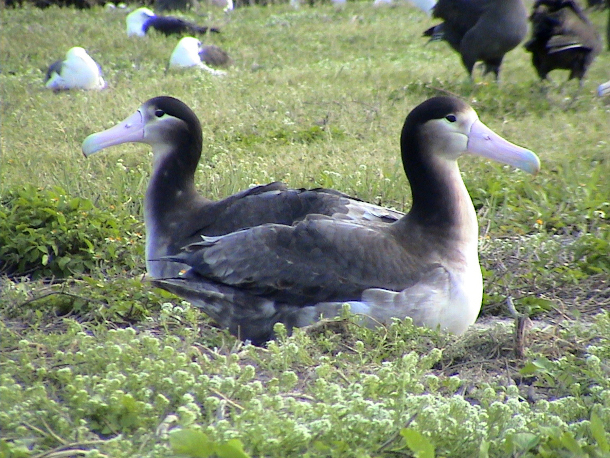 A short-tailed albatross pair faces away from each other. (Photo: FWS Klavitter, US Fish and Wildlife Service, Flickr, CC BY-ND 2.0)

Plus, researchers hypothesized that worse environmental conditions might increase stress-related hormones in the birds, which could affect mate choice. The scientists speculate that a bird could incorrectly attribute its stress to its mate, instead of to the harsher environment, and leave its mate even if hatching was successful.
Researchers say black-browed albatross populations are healthy, with a high availability of alternative mates, so an increase in divorce rates does not raise immediate conservation concerns. But populations of other species of albatrosses are in decline, so if this environmentally-driven divorce is documented in those species it could be cause for concern. That’s this week’s note on emerging science. I’m Don Lyman.