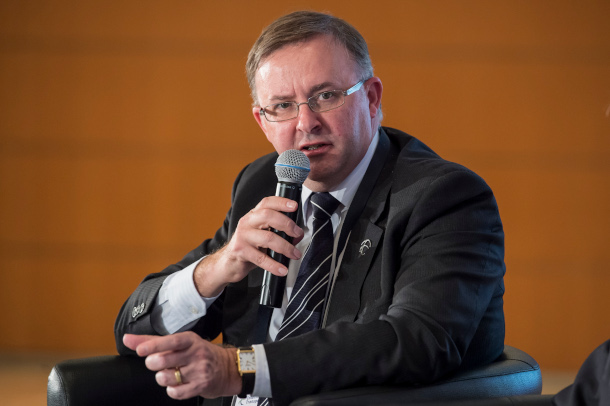 This week, Environmental Health News Editor Peter Dykstra and Host Aynsley O'Neill discuss Australia’s election of a more climate-forward Parliament and the ousting of its former climate denying Prime Minister. They then move on to Secretary of Interior Deb Haaland's task force to replace derogatory place names on federal public lands. For history they flip the pages back to 1905 when the Salton Sea, the largest lake in California, was created after a major engineering mistake.

And with me now on the line from Atlanta, Georgia is Peter Dykstra. Peter is an editor with Environmental Health News, that's ehn.org and dailyclimate.org. And as usual, he's here to take a look beyond the headlines. How're you doing, Peter? And what do you have for us?

DYKSTRA: I'm doing okay, and I hope you are too Aynsley. I'm going to start in Australia where there's been a major change in Australian politics, that greatly affects how Australia deals with climate change issues. Anthony Albanese, the head of the Labor Party, is the new Australian prime minister after elections, which ousted Scott Morrison, criticized as a climate denier. Scott was the head of the Liberal Party in Australia. You may ask how is the Liberal Party, the climate denier party? It's because what we call the Republican Party or the conservatives in the United States are the liberals in Australia. Go figure.

O'NEILL: It's always confusing when there's all those switched up names. But for the new Prime Minister, what is his stance on climate and the environment?

DYKSTRA: Well, he's a career politician compared by some to Joe Biden, here in the U.S. And his party's position is action on climate change with one little detail that we can't leave out. All of Australian politics are somewhat beholden to the coal industry. Coal exports from Australia, particularly to the growing economies of India, and China, are deemed by many to be an economic necessity. Coal mining, coal exporting and coal burning are not going away anytime soon in Australia even if the party in charge believes that climate change is real.

O'NEILL: Well, let's hope that moving from climate denial to climate action will be a step in the right direction.

O'NEILL: And what else do you have for us this week, Peter?

DYKSTRA: Here's one from the western part of the United States. Deb Haaland, the Interior Secretary, the first Native American interior secretary, has started a task force to address the issue of derogatory place names in federal lands, national parks with national wildlife refuges, Bureau of Land Management land. I'll use the primary offensive name once, with apologies, just so we know what we're talking about here. Squaw Canyon in Canyonlands National Park, that word is considered to be an insult to Native American women. But there are 660 places on federal lands whose name use this one slur.

O’NEILL: Wow 660, just for that particular slur. It feels like the bare minimum we could be doing is removing such terrible language from the land that we've already taken from these people.

DYKSTRA: That's right. There's one that has already changed. It was a Union Army General in the late 19th century, William S. Harney, he was a cavalry officer who led Indian massacres. His name was on a sacred mountain in South Dakota believe it or not, the name was changed from honoring Harney to honoring Black Elk, a Lakota medicine man. There's one not in public lands but the town of Sheridan, Wyoming, about 60 or 80 miles south of Little Bighorn is named after a notorious Union Army General who coined the phrase, 'the only good Indian is a dead Indian'. There's no movement to change that town name. But another example of a name that's more than a little bit offensive to some.

O'NEILL: Well, with any luck, Secretary Haaland's task force will get some more respectful terminology for these public lands.

O'NEILL: And what do you have for us from the history books this week, Peter?

DYKSTRA: May 29, 1905 there was an irrigation project, turned out to be very poorly designed, failed in Southern California and a depression in the land in the desert east of San Diego became the Salton Sea. As irrigation water flooded this low land in the desert. It's a major stop for migratory birds but today the Salton Sea is battling major pollution problems. Ironically, within a couple of decades of the Salton Sea being created, Owens Lake to the north, was pretty much drained and turned into desert and dust as the result of growing water needs of Los Angeles.

The Salton Sea was created in 1905 when an irrigation engineering project along the Colorado River got out of hand. Many species have adapted to the Salton Sea including migratory birds. (Photo: Kevin Dooley, Flickr, CC BY 2.0)

O'NEILL: Well it looks like we're losing a lake to pollution when we once lost one to overconsumption.

DYKSTRA: Yeah, and of course the water problems for all of the southwestern cities, Las Vegas, San Diego, Phoenix, LA are really coming to a head.

O'NEILL: Well, thanks, Peter. Peter Dykstra is an editor with Environmental Health News. That's ehn.org and dailyclimate.org. And we'll talk to you again real soon.

DYKSTRA: Okay, Aynsley thanks a lot. We'll talk to you soon.

O'NEILL: And there's more on these stories on the Living on Earth webpage that's LOE dot ORG.


Scientific American | “Offensive Names Should Be Removed from Public Lands”

Learn more about the history of the Salton Sea