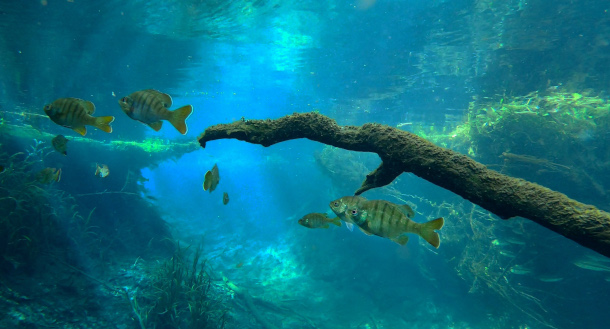 About half of all fish species live in freshwater. Pictured above is the bluegill sunfish, commonly found east of the Rocky Mountains. (Photo: Siddarth Machado, Flickr, CC BY NC 2.0)

More than 200 new species of freshwater fish were discovered worldwide in 2021, including a blind eel found in Mumbai and a fish dubbed the Wolverine pleco for its hidden spines. Harmony Patricio is conservation program manager at Shoal, which compiled the report and she joins Host Bobby Bascomb for details.

PATRICIO: Thank you, thank you for having me.

BASCOMB: These 212 new freshwater fish species, I mean, these aren't just tiny little, you know, minnows or little things that you could see how they can easily be overlooked for a long time. Some of these are actually large fish, can you describe a couple of your favorites for us please?

PATRICIO: One of them is called the Mumbai blind eel, and it has no eyes, fins or scales. It just has smooth skin that is full of blood vessels and gives it this reddish coloration. It's a subterranean fish. It is from the northwestern Ghats of India. And one remarkable thing about this story of this discovery is that this blind eel was found in a 40 foot deep well, on the premises of a school for the blind. And the genetic analysis, the researchers who described the species have done show that it's likely it's split from its closest relative over 1 million years ago. So it's had a lot of time to evolve very distinct attributes.

???? May have split from closest living relative ONE MILLION years ago, making it remarkably unique.

BASCOMB: And I understand there's also something scientists have called a wolverine fish. Can you tell us about that?

PATRICIO: Yeah, this one has gotten a lot of interest, I think because of the name Wolverine. It's a wolverine pleco, it's called. It has an interesting characteristic where it has these lateral spines that can protrude from its Gill coverings that it uses to defend itself in a somewhat violent manner. If anything tries to mess with it, they're gonna be in trouble. The researchers who described this species said in the process of collecting them from the wild, they ended up with bloody fingers. And interestingly enough, other closely related species in this family have never been seen to exhibit this type of behavior, even those that do have these type of spikes.

BASCOMB: I wonder if maybe that's why scientists haven't described them before. Now, you know, they just came up with an individual that looked kind of similar to another one and said, oh, that one's too rough let's let it be.

PATRICIO: [LAUGH] Oh that's a good point. Yeah, maybe nobody wanted to mess with it. Apparently the local fishers in the area where the scientists are working decided to call the fish Buffalo Bill, because it was so aggressive and stabbing everybody with its with its spines.

BASCOMB: That's a solid defense, you have to admit.

BASCOMB: On the other end of the spectrum, I understand that they found a fish where you can actually see its brain through the skin on its scalp. Can you tell us about that?

PATRICIO: Yeah, this is a pretty interesting story. So this is an example of a species that was known to science, but had been misidentified for years. It's native to Myanmar and it's very tiny about the size of your thumbnail. And it's been used by neuroscientists for research for several years. So it's just sitting under their noses until they did some genetic analyses, and found out it's a completely different species than they thought it was, it became a unique species at least 15,000 years ago. The reason it's such a great organism for neurophysiological research is because as you said, it has an open skull, and transparent skin on the top of its head. So you can visually observe its brain while it is alive. And you can use that to collect data on brain activity related to different behaviors. The males of these species communicate with each other through sound. And that's another really interesting thing that they're able to see is like, what does the brain do when they're receiving these communicative sounds and how does it process those sounds. So these studies are actually providing data that can expand our understanding of brain function in humans as well.

PATRICIO: It's a combination of factors. A lot of it stems from the fact that humans are, you know, inherently reliant on freshwater ecosystems for our own survival. Part of the issue is for some species, is that they have been over harvested, especially in the cases of mega fish as we call them, which are the world's biggest freshwater fish. Their populations have collapsed by around 94%. Typically, they do not mature to where they're able to reproduce until very late age. And so if they're harvested, you know, when they're only five or 10 years old, they haven't had a chance to breed yet, it's going to really drop down the population very quickly. Another big problem is invasive species. About a third of modern freshwater fish extinctions can be traced back to the impacts of invasive species. They change the environmental conditions in the water bodies that they're introduced too. They often prey upon native species, or compete with them for food sources. Also, pollution has been a huge problem all from agricultural runoff to industrial that can really affect fish's health and ability to reproduce successfully. The fragmentation of habitats such as damming rivers and reducing fishes ability to complete their life cycles by moving from downstream to upstream has had a significant impact. And climate change is also starting to have a real impact as well. 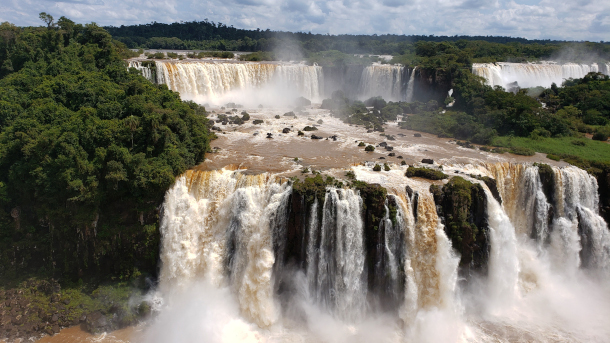 There are more than 2,000 freshwater fish in Brazil alone. Some can be found in areas like the Iguazu Falls pictured above. (Photo: Boris Kasimov, Flickr, CC BY 2.0)

BASCOMB: Well, why are freshwater fish so important? And why should we really be paying attention to this problem?

PATRICIO: I would say there are many reasons that we should all be paying attention and concerned about the decline of freshwater fish. In many ways. They're like the canary in the coal mine. They're an indicator group of animals that show us what's happening with the health of aquatic ecosystems that we as humans are highly dependent on. If the fish are not doing well, we can be assured that those systems are not going to be very useful for humans down the road.

BASCOMB: Harmony Patricio is the Conservation Program Manager at Shoal. Harmony Thank you so much for your time today.

PATRICIO: Thank you, Bobby. It was great to talk to you.