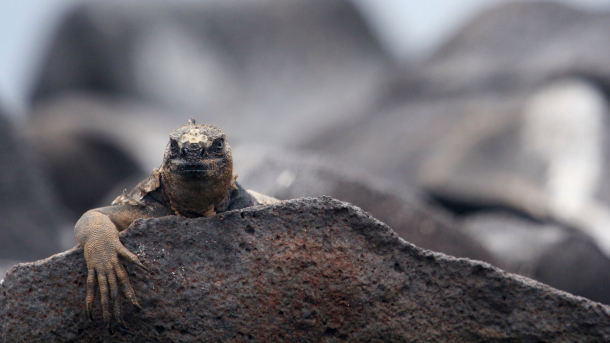 Writer Jennifer Junghans had always dreamed of going to the Galapagos to swim with the marine iguanas. In 2017 she finally had her chance, and although the iguanas stayed high and dry, the experience brought her up close with blue-footed boobies and blacktip sharks, and face-to-face with a curious pufferfish. Jennifer shares her story of visiting “the remote wilderness of her dreams” with Aynsley O’Neill, who spent a memorable summer studying in the Galapagos.

DOERING: So, Aynsley, I know from hearing your stories around the office that you lived in Ecuador for a while and actually you spent some time in the Galapagos, around all those strange and wonderful animals.

O’NEILL: Yes, it was definitely one of the coolest experiences in my life!

BASCOMB: Oh, I’m jealous. The Galapagos is high on my list of places I’d love to visit.

O’NEILL: You definitely should if you ever get the chance. But in the mean time we have a story from writer Jennifer Junghans that will take you to the Galapagos, at least for a few minutes.

JUNGHANS: For as long as I can remember, I’ve dreamed of traveling to the Galapagos Islands to free dive with the ancient marine iguanas and roam the archipelago as Darwin did as he unraveled our story of evolution.

He found little value in the marine iguana, insulting their physical appearance, intelligence and behavior. But I fell in love with them when I saw a photo in National Geographic of this wave of marine iguanas swimming underwater.

I longed to be right there among them, these gentle giants that often look like statues on land armored in scales with faces that resemble a gentler cousin of tyrannosaurus rex, and snaggletoothed spines that jut from head to tail, eyes that stare and large claws at the end of hands that look strangely like our own.

Then, in 2017, I disembarked a small plane from Ecuador and stepped into the remote wilderness of my dreams. 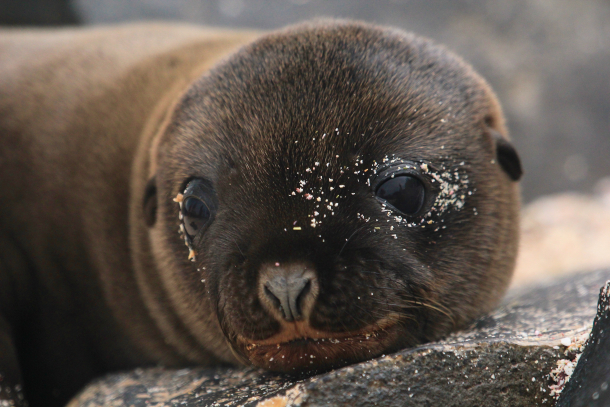 A sea lion pup with sand all over its face (Photo: Jennifer Junghans)

In July, the temperature is cooler, the seas are rougher and the winds are stronger but the lifecycles of the natural world are vigorous and alive.

Here, the animals are abundant and unafraid. In one startling panoramic view, blue-footed boobies dive like torpedoes into turquoise water.

Sea lion pups with giant dark globes for eyes and sand all over their faces follow us as they wait for their mothers to return with food. And colossal numbers of my beloved marine iguanas bask in the sun to warm themselves, piled in tangles of arms and legs and salt-crusted faces.

At night when we anchor at sea, sea lions jump up to rest and sleep on the stern of our boat and we wait for blacktip sharks to appear just below the surface, likely looking to score an easy meal, accustomed to the bycatch fishing boats dump.

I gasp when they appear. Several have come and we peer overboard, the mystery of how big the next one will be or how close it will come or from which direction electrifies my senses. In their presence, Hollywood’s characterization of these beings as man-eating predators crumbles and I feel an undeniable resurrection of a connection once lost. 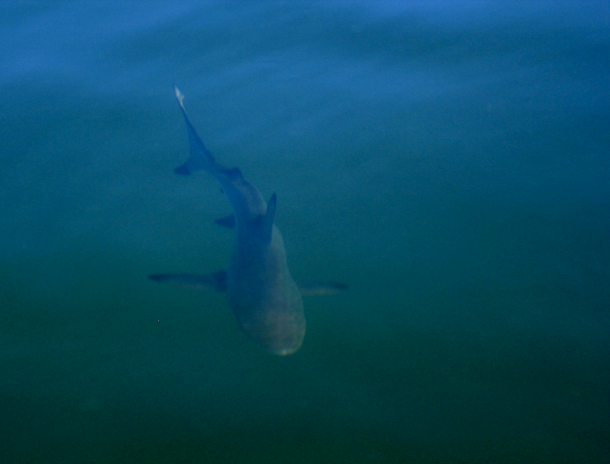 Out here in the wilderness, under the celestial skies in these moments of reverence I am closer to the truth than I’ve ever been. I don’t wonder about the future or question my existence. Somehow, out here, where the planet pulses according to its natural rhythms, it all makes sense.

We take a long hike up rocky terrain to where Blue-footed Boobies have gathered to mate and raise their young.

White puffs of down stretch their gaping beaks upward from beneath their mother’s wing and by the magic of serendipity, we witness the flamboyant courtship dance and the rarely seen mating of these birds. 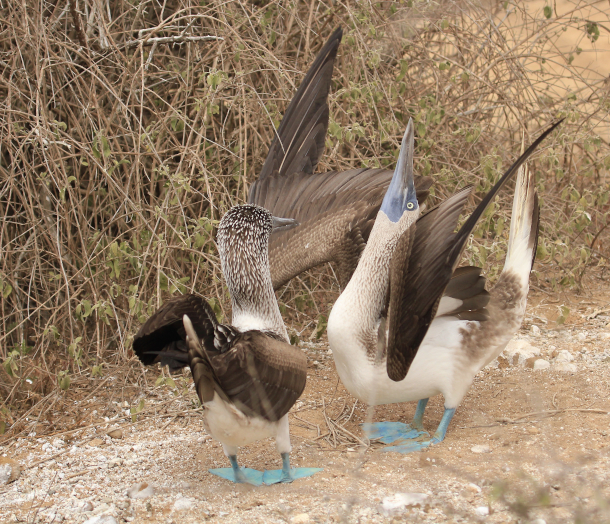 But it’s a tiny pufferfish that touches me most. Several swim up to me as I snorkel but one stays. She fans her fins, hovering right in front of me, observing me as intently as I observe her. We stay like this, face-to-face, for several minutes.

I’ve never felt so acknowledged or seen. In that moment, the boundary between species blurs. We are two beings who share this planet in a moment of un-interrupted recognition. As different as we look, transcending millions of years of evolution, we come from the same origin — in fact we share strikingly similar genomes with pufferfish — and something inside me innately knows it.

I never did swim with the marine iguanas as I’ve dreamed of. They spent most of their time basking on land even though they depend on the algae clinging to rocks in the sea, but my time here has given me something greater. Wandering among these wild animals at every turn, I attune to how life unfolds and exists when we are the visitor. It’s illuminated what the world once was and the wildness that we are still able to preserve and protect. 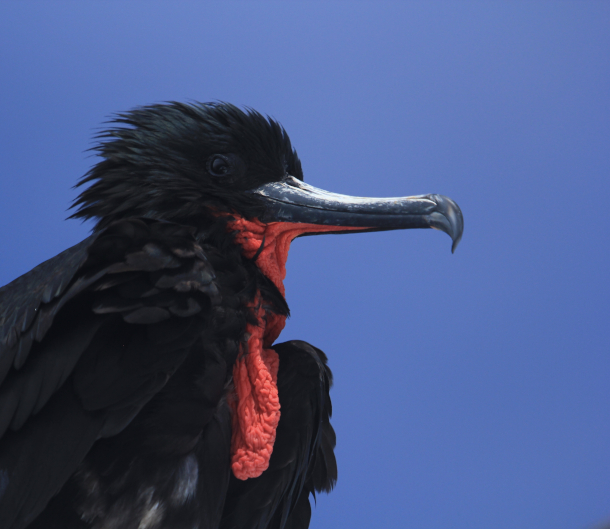 Frigatebirds like this striking male are a familiar sight in the Galapagos. (Photo: Jennifer Junghans)

O'NEILL: Well, first of all, thank you, Jennifer, I loved to hear that. I have to say I was extremely excited to get to speak to you, because coincidentally, I spent some time in the Galapagos Islands, in fact, during July of 2017, so we must have been there overlapping at the same time.

JUNGHANS: Oh, my goodness! I wonder if we crossed paths?

O'NEILL: Well, I was just thinking, I was like, what are the chances? I was very fortunate that I got to spend some time with each of the animals that you wrote here, except for maybe the puffer fish. But I have to say, I love that you have an affection for the marine iguanas, because I do too.

O'NEILL: Even though they are, like you said, you know, a little bit prehistoric, a little bit salt-crusted, maybe not the most captivating at first sight. 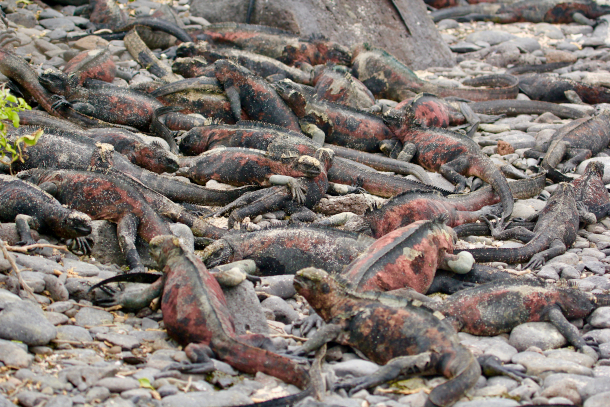 JUNGHANS: I almost think they are! I tend to gravitate towards the underdog, always. And so when people see these creatures, and they, they think it's ugly, or they don't think it's worthy of the attention, for me, I see beyond all of that immediately. And I, I know that there's a being in their soul just like mine. I, I love them, so much!

O'NEILL: I also loved hearing you talk about the sea lions who would jump up to rest near the stern of the boat. I didn't spend that much time on boats unless I was traveling between islands. But right in front of the school that I was attending was the beach and they would all just come pop up there and hang out with us there.

JUNGHANS: [LAUGHS] Yeah, it's, it's amazing because you, you are always reminded of the rules, to keep your distance from the animals, and stay away, and don't touch them, and don't encourage them. But at the same time, you often find yourself having to move away quickly because they're, they're following after you, or the sea lions are coming up and, and touching their noses to yours as you are snorkeling, or . . . [LAUGHS] I was standing next to this whale skeleton that we had stumbled upon on a beach and my daughter was taking pictures of me and all of a sudden I felt this thing on my back. And it was one of the mockingbirds that had flew onto my bathing suit, crawled up my back, and stood on my head while my daughter was taking photos! And it was wild, because [LAUGHS] you know. . . 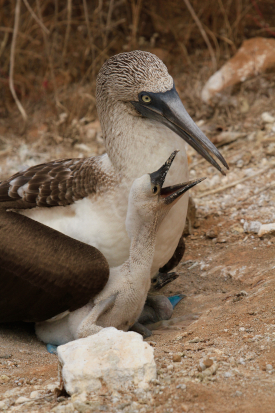 JUNGHANS: Literally wild. We are used to seeing animals in zoos and aquariums and on television. But, but that's more, you see the shell of an animal. When you are on the Galapagos, you are witnessing this entirety of this being, and it's in its natural place.

JUNGHANS: You can sit and stay among them, and observe this kind of life. And we just, we rarely have the opportunity to do that. So it's, it is wildly magical.

O'NEILL: Writer Jennifer Junghans lives in Sacramento, California. Jennifer, thank you so much for sharing your story with us.

JUNGHANS: Thank you so much, Aynsley. It's been a pleasure to be here.

DOERING: I just love that idea of being truly seen, by of all things, a puffer fish…

BASCOMB: Yeah well I was once truly seen by a barracuda while snorkeling but it wasn't nearly as pleasant!

BASCOMB: Well I was in the Florida Keys and I was snorkeling and I had my head down, like looking down for some reason. And then something made me pick my head up, and right in from of me was the biggest barracuda I’ve ever seen in my life. And they’re almost as big as I am, they have teeth like the size of my index finger. And I don’t mind telling you guys, it scared the pants off me. Although I was in a bathing suit so I guess I wasn’t really wearing pants. [LAUGH] But in any case it was really frightening.

O’NEILL: [LAUGHS] Well, we’re glad you made it out alive, Bobby!